The Sealing Wax Maker is a profession in which a person makes Sealing Wax sticks. They work in the candle factory in 3 11.

The profession is an Extra Employment meaning that the job is assigned to an individual on Employment Selection Day. As the job is random and can’t be preselected the training is given when undertaking the role.

Many Extra Employment are levelled. A higher level usually indicates a deeper understanding of the manufacturing process and individuals can progress once they shown their abilities and a placement opens up.

A Level 1 Sealing Wax Maker, cuts the wicks for the wicked versions of the end product. They also prepare moulds for the wax. Moulds are prepared by ensuring that there are no remnants of the previous batch and the moulds are clean this makes it easier to remove the new sealing wax sticks later. The Level 1 Sealing Wax Maker also folds and assembles the boxes for the finished product.

At this level, they prepare the chemicals. The right ratio of the chemicals is very important to ensure that the wax is slow-moving when molten, and hold the impression from the seal as well, when broken, it should snap instead of bend.

Finally, at this level. They melt the chemicals, and beeswax to make batches of sealing wax sticks. They are also the ones that box the finished product. These boxes hold 6, 12 or 48 sticks of wax, of either type, and can be wrapped individually.

This is beneficial to those who enjoy seeing the end product of their work or creating something that's wildly used. Additionally, they can move around and exert themselves physically.

Sealing wax is used in everyday life by everyone from aristocrats to bakers, and even by criminals. While the profession is not often lauded, they are an integral part of commerce and communication.

Tools they use for their profession at all levels are;

The two different types of sealing wax are wicked and not wicked. Wicked sealing wax is used for beginners, while the more skilled will use wickless wax sticks.

The only colour that the sealing wax comes in is red, this is due to The Great Rewind and to save on resources.

There are four ingredients in Sealing Wax. The ingredients have changed since The Old World. Today the version that snaps when broken and doesn't bend, is used.   The materials used in the sealing wax that snaps are [1];

The Sealing Wax Maker makes sealing wax sticks, so that every place around the country can send confidential messages between people and outside of the city of Birdencaster.

The dangers of this profession are, spilling hot wax on yourself and melting the ingredients too much causing fires. 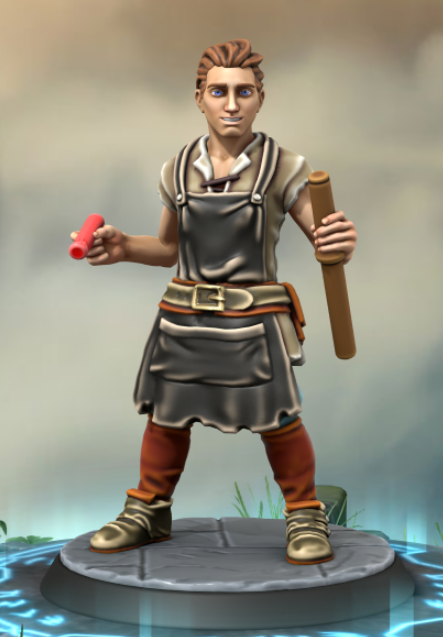 Thanks to Hero Forge for the use of their software to make my character picture.

I always appreciate your profession articles. I don't think anyone's more thorough about the details of how a job works! Your interest in the process by which things are made make your articles very informative as well as interesting. And you also spend time on things that other people might not, because they focus on the bigger or more "glorious" professions in their universes. You consider the little guy, always, and I like that. Good work!

This was a really interesting and well developed article. I enjoy all the little details put in to give this profession its full depth. I too always enjoy seeing others write about "lesser known" jobs. It was easy to read and follow along while gaining a better understanding of even a small snippet of the world and its people.