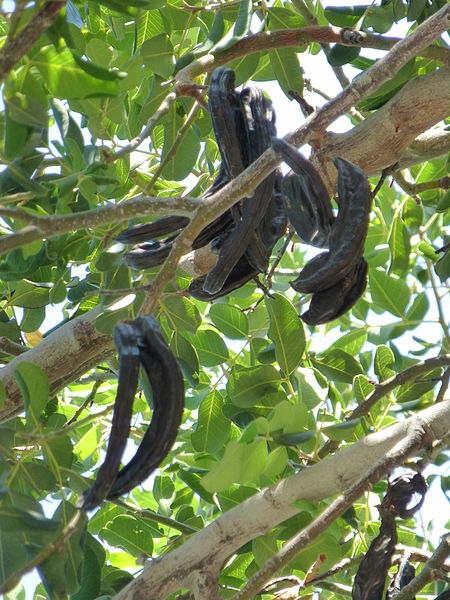 Carob by Nevit Dilmen
Portuguese Carob is a subspecies that comes from Portugal. It is an important import to the UK because of The Chocolate Wars. Carob is a healthier alternative to chocolate, that looks like brown or black chilli peppers [Image Left] and is grown from trees.

From Plant to Powder

The pods and beans are dried and ground. The powder looks similar to cocoa powder. It is then put into canisters for storage. The canisters themselves are then packed into crates to be transported to other places.   Chocolate bars derived from carob are not available, to the British, as it requires two types of butter. One of these kinds of butter comes from the cocoa beans, so when something tastes of chocolate it is because of the carob powder added not of actual chocolate.

The British obtained carob from the Portuguese rather than obtaining cocoa pods or beans from the Nigerians. This is because of British issues involving pirates, in addition to the high costs of transportation. This led to The Chocolate Wars in The Between Years as the British needed to protect their merchant ships. Afterwards, instead of going back to protecting their merchant ships, went into trade negotiations with the Portuguese instead.

As the carob was cheaper than the cocoa pods that came from Nigeria, the British kept the trade with the Portuguese, which had a positive effect on both parties. For the Portuguese, it meant a rise in trade and demand for the commodity. For the British, it was cheaper to transport goods from Portugal rather than Nigeria. Since there was no perceivable change from cocoa derived-chocolate from the carob derived-chocolate, the cost of advertising and other media to persuade the general public of the change was saved, as the public didn't need to be persuaded. The saving of funds also meant that the British could replace the ships that were lost in The Chocolate Wars.   From the first war, the Nigerians found their industry was failing and fought the pirates themselves. This conflict, The Chocolate Wars II resulted in the Nigerians transporting chocolate to the UK, however, while this meant that the UK had chocolate again, it only meant that the wealthy could have the original chocolate.

Answering: "an ethnicity whose cultural exports are highly sought after"
Visit JamesWoodwright's Competition Page Check all other answers to this prompt Competition Homepage

Nice article. Poor British people, you don't even have chocolate anymore... I don't believe in this fake chocolate, I'm emigrating back to France!

After reading your comment I laughed so hard I coughed.