Moles take all of their relationships very seriously. Because strong bonds with their loved ones are important to them they are known for not only marrying their romantic partners, but also their best friends. This means they know two types of weddings: romantic wedding and BFF wedding.

It is a custom that one of the partners in love proposes to the other. This could be either of them, at any time they deem appropriate. While there aren’t any particular rules or traditions related to proposal, in [email protected]Ö#Ä3, they still have a tradition that the person proposing has to haggle with the other person's parents and “buy” them. This originates from the ancient traditions that were only read about in old writings, but was brought back in [email protected]Ö#Ä3. But as modern parents don’t really want to butt in to their children's lives and just want them to be happy with the person they love, they usually settle for a symbolic amount of money. Commonly, this can also be given in the form of an engagement ring, given to the partner, but this tradition is now only rarely practiced. However, all across the world it’s not only up to the person who was proposed to agree to the marriage, it’s something the whole families of both parties must agree on. A wedding isn’t only a union between the two people, but the whole family. Before the wedding, all the members of both families must sign a document agreeing to the wedding.

At the wedding it is tradition that the person who proposed, chooses between 4 different brides/grooms. These are the one they proposed to, and the 3 most likely alternative partners. This is to ensure that the person who proposed is sure about their choice, and still has a chance to pick someone else. A lot of times other brides/grooms are BFFs of both bride(s) and groom(s), since in most cases there is very little chance of the person changing their mind

Another important aspect of the weddings are traditional colors of the dresses:

Examples of romantic weddings in comics

There are no special traditions related to proposals, the friends usually decide together that they want to marry each other. But same as with romantic weddings, they need to get the approval of their entire families before they get married.

Wedding traditions for BFF weddings aren’t as elaborate as they are for romantic weddings. Here, there is no choosing between the 4 different brides/grooms. However there has to be the leader of the family, or both leaders if the BFF wedding is between members of separate families, to vouch for the friendship, and present the documents signed by the entire family, or families. There also aren't traditional colors for wedding clothes, but instead, the two friends choose the wedding outfits for each other. In the ceremony, they also give each other friendship bracelets that they made for each other.

Examples of BFF weddings in comics

After the marriage, there is no chance for divorce unless under very special circumstances. Because of that moles don’t rush into these things, and this is also the reason for all the safety precautions, such as agreement of all the family members, and choosing of the 4 grooms in romantic weddings. One instace of a marriage beinf dissolved was Scarlett's previous marriage. She married a woman as a man, and with changing her gender the circumstances under which the marriage was formed were significantly changed - Scarlett's ex specifically married a man, and as there was no man anymore, the marriage became void. Of ocurse, every case is looked at individually, and if it is determined that keeping a certain person is detrimental to the whole family, they will get cut off. But as already said, moles take their relationships seriously and don't tend to rush into things, so these occurences are very rare. 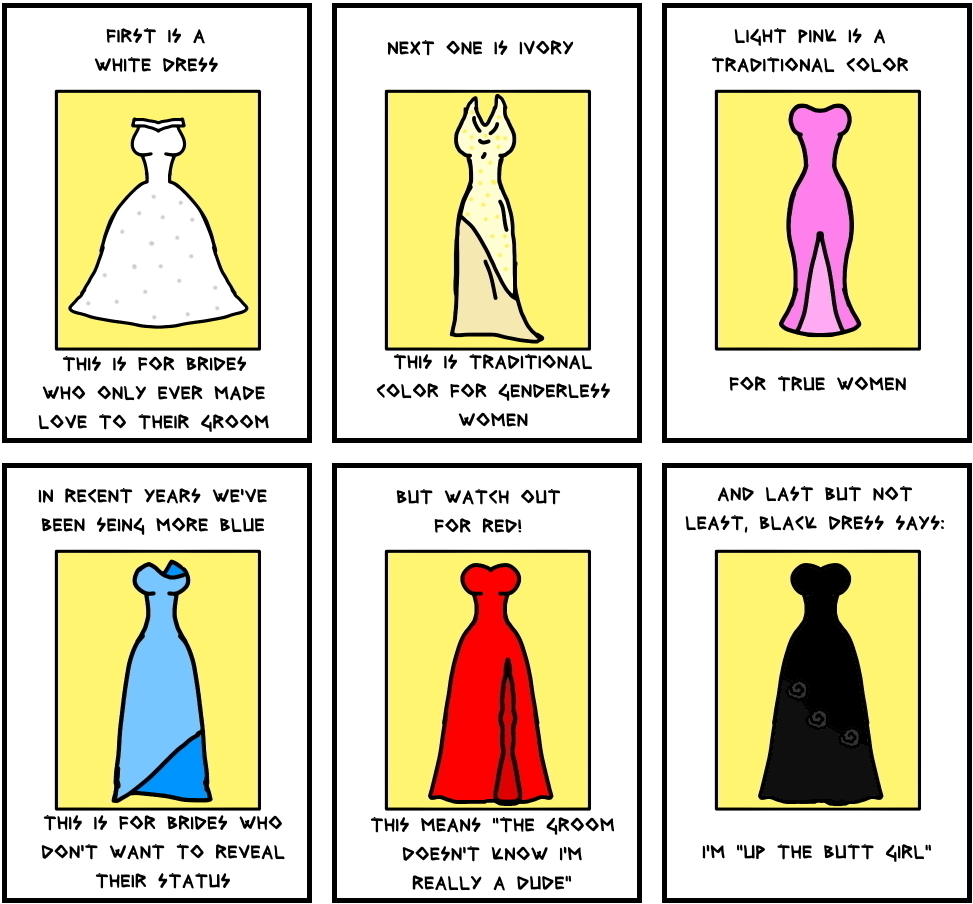 Some of the Wedding Dress colors