Longchamp was consecrated Bishop of Ely in 1189, and selected by King Richard as Chancellor of England in the samme year. In 1190, following the death of William of Mandeville, Count of Aumale, he was made joint Chief Justiciar with Hugh de Puiset, Bishop of Durham.   His arrogance upset churchmen, barons and officials, who turned to John, Count of Mortain to curb Longchamp's pride and ambition.   Longchamp left England in October 1191 and is currently on the continent.

Gerald of Wales, an unreliable and often spiteful writer, has nevertheless left a vivid description of William Longchamp1:


He was short and contemptible in stature and crippled in both haunches, with a big head the hair on his forehead coming down almost to his eyebrows, like an ape. He was very dark, with little sunken black eyes, a flat nose, snarling face. His beard below his eyes and is air above them were all shaggy; his chin was receding, and his lips were spread apart in an affected, false, and almost continual grin, which he very suitably used as a disguise. His neck was short, his back was humped, and is belly stuck out in front and his buttocks at the back. His legs were crooked, and although his body was small his feet were huge.   Gerald of Wales, De Vita Galfrida, pp 420

William Longchamp, born to a humble Norman knightly family, entered public life in service of Geoffrey Fitzroy, Henry II's bastard son and Bishop-elect of Lincoln. He soon left to join Henry II's chancery, then entered Duke Richard's service where he quickly became a trusted advisor. He was appointed Chancellor of Aquitaine by Duke Richard in the late 1180s, and represented Richard before the King of France in a dispute with William Marshal.   After Richard became king, he appointed William to the Bishopric of Ely. He was consecrated on December 31, 1189. At the same time he paid £3,000 for the position of Chancellor of England.   Before he left England Richard appointed Longchamp as joint Chief Justiciar with Hugh de Puiset, Bishop of Durham, the pair entrusted to exercise royal authority while Richard was out of the realm. Richard named Hugh Bardolph, William Briwerre, Geoffrey FitzPeter and William Marhsal as associate justiciars to work with Longchamp and Hugh.   By June 1190 Longchamp had bypassed Hugh de Puiset, ousting him from the Chief Justiciarship. At the same time Pope Clement III appointed Longchamp as Papal Legate. Longchamp soon took advantage of his position as head of government and ranking church official, siezing towns, appointing sheriffs and selling privileges. he hired mercenaries and spent extravagantly.   His ambition brought him into conflict with both barons and common folk, who felt Longchamp (who did not speak English) was trampling on ancient rights. Those disaffected turned to the one man who might stand against Longchamp - the king's younger brother, John, Count of Mortain, who held extensive lands in northern and western England. In 1190 Longchamp besieged Lincoln Castle, whose castellan refused to hand it over to him, John mustered troops of his own and fortified the royal castles of Tickhill and Northampton.   The dispute between Count John and Longchamp was temporarily resolved in spring 1191, when Walter of Coutances, Archbishop of Rouen, negotiated a peace. LOngchamp left off his siege of Lincoln, and John returned the royal castles he had seized.   Though Clement III died in spring 1191, Longchamp was again appointed Papal Legate by his successor, Celestine III.   Public opinion turned markedly against Longchamp when his men laid siege to St Martin's Priory in Dover, where his old emplopyer Geoffrey Fitzroy, now Archbishop of York, had taken sanctuary upon landing in England.   On 5 OCtober 1191 Hugh Nonant, Bishop of Conventry, and other magnates convened a trial against Longchamp, who did not attendf. The trial found Longchamp guilty and he was deposed and excommunicated. Longchamp took shelter in the Tower of London, but alcked support from the citizens of London and was forced to surrender the Tower, his offices and his other castles.   Longchamp fled to Dover to seek passage out of England, but his lack of English proved a barrier to explaining his plans. On one occasion he disguised himself as a woman, which led to him being assaulted by a fisherman who mistook him for a prostitute. He eventually left England on 29 October 1191.

The catty Gerald of Wales claimed Longchamp’s character was as unpleasant as his appearance. He was greedy, avaricious, overweeningly ambitious, and completely unscrupulous. Longchamp made no bones about his contempt for the English – he refused to learn their language - and used every opportunity to express that hatred. He employed a troupe of French jugglers and minstrels to sing his praises in public, and in his presence he frequently had them sing his favourite verse2: 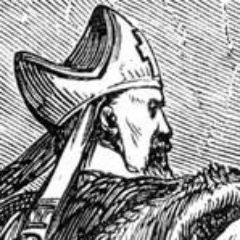