Members of Draconid class, modern dragons are far less numerous than Humans, the other fully-sentient species to have developed on Elonth. Global population is around 120 million. In modern times, there are five distinct species of dragons, each with a country that is regarded as their ancestral home.

The dragons all have common traits (4 legs, 2 wings, 1 tail), but their appearance (colour, horns, spines, tail shape, etc.) can vary greatly.   Females are usually a little smaller than males and have more delicate or pointed facial features. They also do not have spikes along their spine.   Skeletal Structure 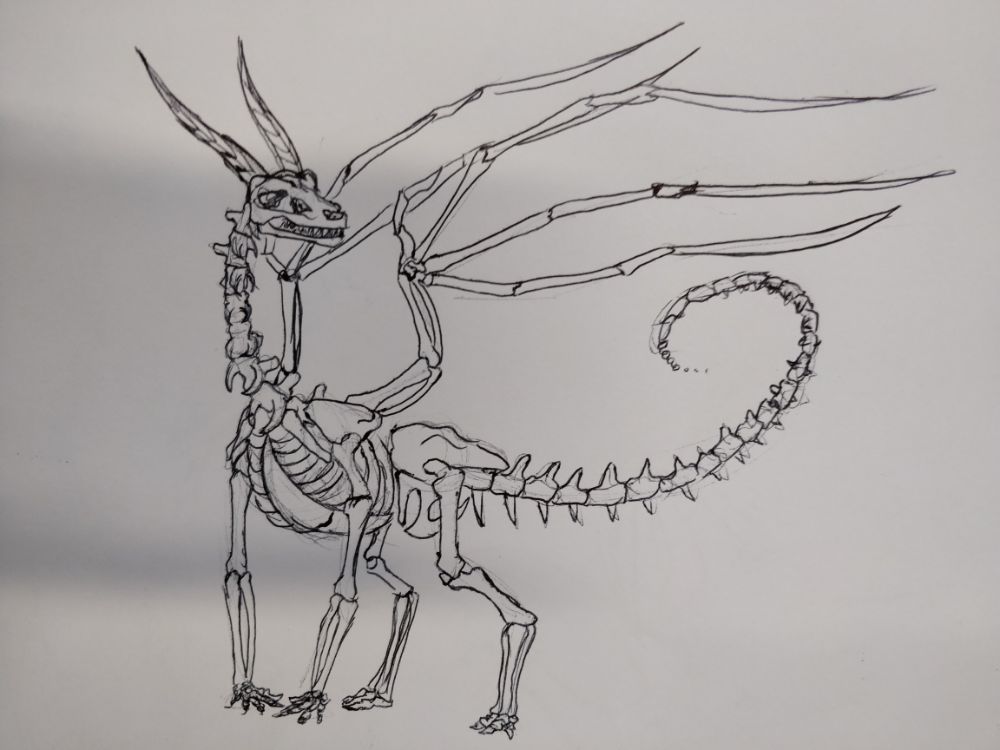 Note the large keel bone, to which the wing muscles attach.
(Image error: dragons have four wing fingers, not three.)
Each dragon naturally grows a Shiridite crystal in the right side of their chest, called a heart crystal, which their body uses as an energy reservoir. Shiridite-compounds can also be found in their blood, horns, claws, spines, chest plates and tail blades, granting a greater energy conductivity.   Their respiratory systems are underdeveloped, and would not be capable of supporting any non-Draconid creature of their size.

Dragons reach sexual maturity at age 50. Clutches will usually have 1-4 eggs. In modern times, it has become socially expected for mates to only raise a few clutches in their life between ages 100 and 250. Dragons' cycles are slow, with large portions of time between breeding opportunities.   While the five modern groups of dragons are visually distinct, they are still genetically similar enough for members of different groups to produce viable offspring.

Dragons never completely stop growing but do slow down as they age. Hatchlings tend to be around 0.3m tall (measured at the shoulder) upon hatching.    The height of each individual depends on their species and genetics, but generally dragons fall into these height ranges as they age.

Dragons are capable of living in a wide range of environments, but do best in warmer environments - with the greatest population densities in the tropics and subtropics.

Dragons are omnivorous, typically with a preference for meat. Being the most potent members of the Draconid class, their bodies operate largely on ambient energy which they absorb from the environment. They do still, however, require food for certain bodily functions, to grow, and to heal.   Historically, they would hunt infrequently, foraging and energy-basking between hunts.

Dragons, especially ones more than a century old, are considered to be more intelligent than humans. Older dragons often pride themselves in their wisdom, vivid memories, and intellectual prowess.    There is debate over how much their brains continue to develop as they age versus the contribution of sheer experience, knowledge and practice. It is, however, generally agreed that young dragons mentally develop slower than humans, but continue to develop long past the age at which human minds mature (around 25 years old).

Dragons have an excellent sense of sight, but average hearing and poor smell.   With every dragon having inherent Energy Sensitivity, they are also naturally adept at sensing movement and energy flows around themselves when they keep their minds open to the environment. They can come to rely on this sense as much as their sight.

In modern times, it is still not uncommon for dragons to wear no clothing in public, but most dragons will wear accessories and clothing items in public for utility, self-expression, or as status symbols.

The distant ancestors of modern dragons originated in Vrakura, spreading across the globe over time, genetically diverging and adapting to new environments. They lived mostly solitary lives, claiming territories which they defended against threats, but developed a proto-society based on their interactions at the shared borders of territories. Information did not travel fast, but in their bartering for knowledge, resources, and precious things, individuals were able to gain notoriety and attract suitors.   They did not care particularly much about Humans – holding them in little more regard than other large animals: potential prey. The dragons did not have much need for tools or experimentation – their natural abilities being enough for them to survive as apex predators.   As human tools and knowledge became more advanced, particularly towards the late classical era and early middle ages, they became more of a threat to dragons. Many dragons realised that it was not worth the danger of living near areas that were highly populated by humans. Humans saw safety in numbers, and their larger settlements tended to grow rapidly.   As they do with anything that they see as a threat, humans began to seek to eliminate the threat that dragons posed. Single dragons did not stand a chance against trained hunting parties, and the dragons eventually realised this. They began to group together. Thus, human and dragon territories began to form.   A major contributor to the locations of these territories is the environment. Dragons tended towards areas with lots of ambient energy (e.g. volcanoes, deserts, large rivers/waterfalls, stormy/windy areas) and more abundant Shiridite. Whereas humans chose to settle in places with more physical resources – food and building materials.   Eventually, dragons in some territories began to form settlements of their own. Seeing the successes that humans had made, they began their own efforts into the crafts and sciences. There was long-lasting animosity between humans and dragons but, in most parts of the world, this was eventually overcome.
Genetic Ancestor(s)
Genetic Descendants
Lifespan
350 years
Geographic Distribution