The cecaelia (See-kay-lia) are the only known, true amphibious sapient species on Elohey. Over history, they have had many names such as ‘merfolk’, ‘octofolk’, or ‘sea witches’. Records from coastal communities are rich with the stories of interaction with cecaelia.
It common to find them living in coastal areas in communities with other sapient species. However, some rumors persist that there are branches that live inland near freshwater lakes.

Cecaelia are a hybrid species with the upper half of their body being humanoid and the lower half being that of an octopus. Despite this remarkable biological arrangement, they do have an internal skeleton. However, their spine and skeletal structure stops just below their waist.
They have no full hip bone structure as land sapient species do. Instead, the lower half of their body maintains its shape because of highly developed muscle layers to form their ‘hips’ which provide the chief support for their tentacles.
Cecaelia have between 8 to 12 tentacles with sucker grips on the bottom. The sucker grips are strong enough that a cecaelia can climb walls. However, they are not strong enough to allow the cecaelia to carry another person with them. The cecaelia tentacles come in various colors and patterns that blend or compliment the skin tone of their humanoid form. Overall, cecaelia skin tone ranges from mixtures of rust-orange, blue-green, green, or yellow. Spots or stripes of complimentary colors, such as black stripes against rust-orange skin tone, are common.
As for their humanoid side, they resemble a lean but muscular human with pointed ears and high, arched eyebrows. Cecaelia have no body hair except for eyebrows, eyelashes and hair on the top of their head. Hair color for a cecealia covers the spectrum of colors from purple, green, blond to even black.
Eye color for the species is more restrictive. Cecaelia eye color is amber, yellow, or black.
Cecaelia are amphibious and enjoy spending time out of the water as much as they do in the water. However, their skin must stay moist. They accomplish this by secreting a mucus to keep their skin moist. While out of the water, they breathe air with their lungs. When submerged, they absorb oxygen from the surrounding water through their skin. The restriction of having to keep their skin moist means cecaelia are sensitive to high heat or cold when out of the water. For example, desert travel is hard but not impossible for them.
Another unusual trait is that the cecaelia have blue blood and two hearts. Only the driderii share this unusual blood color. This has made scholars suggest there is an ancient connection between the driderii and the cecaelia.

Perhaps the most interesting trait of the cecaelia is that they can shift their gender. They do have a concept of ‘male’ and ‘female’ regarding the ability to have children. However, the cecaelia species can swap genders if they so choose. This process isn’t rapid and takes them several minutes to perform the task.

Last, the cecaelia share the same trait as an octopus or a squid of being able to eject an ‘ink’ into water to mask their escape. This trait only works for them when in the water.

Cecaelia are ‘outlier carnivores’. This means that while the majority of their diet is meat, such as fish or mollusks, they supplement that with leafy and root vegetables. 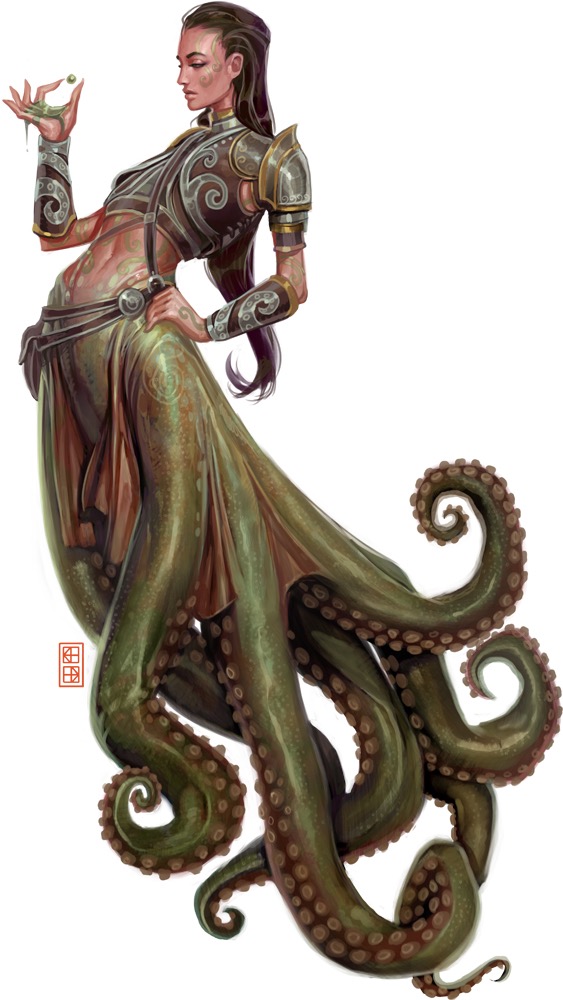 A character that is descended from a cecaelia or has cecaelia in their bloodline has the following available, regardless of ethnicity.

Age Cecaelia biologically mature at the same age that humans do, however mentally they are more what some would call adult at the age of 70.


Size Despite having a mass of tentacles for the lower half of their frame, the are only Medium in size.

Speed Their base walking speed is 25 feet and you have a swim speed of 40 ft.

Sure Footed The character has a +12 to their CMD against trip attempts on them and have a +1 to their Climb skill.

Amphibious Cecaella have the ability to breathe both air and water.

Octopodal Cecaelia's tentacles give them an advantage in melee and in the water. The character has a +4 to make or resist a grapple attempt. If they succeed in a grapple, they retain the +4 to keep their victim grappled. They have a +8 to swimming checks.

Ink Cloud A cecaelia, when in the water, can release a cloud of ink to obscure themselves. This is a 20-foot radius, non-magical, ink cloud. The cloud lasts for 1 minute. Once the cloud is active, a cecaelia may make a move away from any opponent without triggering an attack of opportunity. After a cecaelia releases their ink, they cannot use it again until they have taken 8 hours rest.

Everything's a Floor Because of their sucker tentacle bodyparts, a cecaelia can scale dry walls similar to spider climb ability. They may only use this if they are lightly encumbered or less. This ability does not work on slick surfaces.

Temperature Sensitive Given their biology, cecaelia are sensitive to heat and extreme cold. When being targeted by fire or ice based attacks, cecaelia suffer a -4 penalty to attack rolls, skill checks, and saving throws.