The Lords of Dust is a secret cabal of rakshasa and other fiends who manipulate the world of Eberron with the goals of releasing the Overlords from their imprisonment and amassing personal power while doing so. Although it has most of its strongholds in the Demon Wastes, it has infiltrated organizations and social groups the world over. Within the Lords of Dust, the Bleak Council dictates stratagem and communicate directly with the bound Overlords. The Claws of Khyber operate more directly, typically serving as spies, assassins, and provocateurs. The rakshasas and fiends who comprise these two groups consider everyone else pawns, and they move them accordingly.   In addition to couatl and dragons, the Lords of Dust particularly despise the Church of the Silver Flame and they actively seek to revenge themselves on any or all of them if the opportunity arises. The Chamber is an ancient enemy that works in direct opposition. A new enemy, perhaps surprisingly considering their shared fiendish nature, is the coven of hags known as the Daughters of Sora Kell. The Daughters were duped into performing a ritual that helped partially free Levistus, and the Daughters did not care for that one bit. The hags directly aided the Troublemakers in their battle against Levistus and that aid was instrumental in the Overlord's defeat. 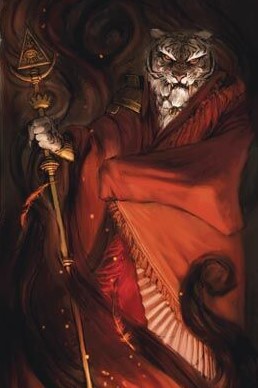