Taken from a letter to the halfling social activist and hero of Khorvaire Willow from his adoptive uncle, General Blue Bari of the Droaam heavy cavalry (who is barely literate).

In 986 YK, the hags appeared in what is now Droaam, and have since built a great city that they named after the mountain they founded it in, the Great Crag.

Twenty years ago, the wizard Galather tricked the hags into performing a ritual that helped free Levistus from his imprisonment in Khyber. The Sisters didn't take this well at all and gave considerable magical support to the Troublemakers in the effort to defeat Levistus. Although things worked out in their favor and Droaam is stronger than ever, the Sisters still hate Galather with a passion and would love to kill him if they could find him.

They actively work with House Tharashk to send their mercenaries and laborers out into the world, bringing money and intel back into the nation. 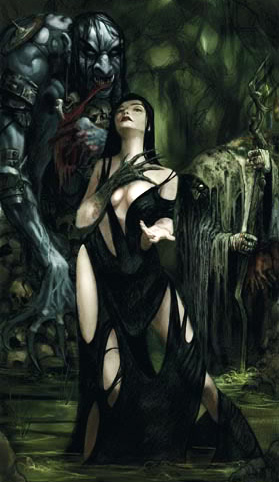