"Port Ar is the last stop before you get to Guldaria ,. Trust me, you better off dealing with this borderline lawless place than the hyper regulated ones in that place. I hear they have guards that read your mind there! Here? Keep your business legit, pay your taxes and fee's and all is good...And sorry about the dead bodes there..."
- Typical conversation with new visitors to port Ar

Port Ar (Sometimes jokingly referred to by outsiders and visitors as Port Arrrrr) is the northern-eastern most port of the Elf-Dwarf Alliance . It is believed the name came form a noise/sound one of the founders made in frustration over trying to decide on the name. Other tales say that its orginal name was much longer and complicated but started with Ar and the shorter name stuck.   Port Ar is inhabited by the noble Dragonborn who enjoy the wealthier positions in the city, the toiling Husky Canines who work primarily as monks and salesclerks, and is often visited by the stealthy Star Elves. Variations of humans are rare, as residents, in Port Ar as it's not the main port of the EDA, but there are many visitors and traders from other lands. All all welcome here, even if the place does have a reputation as a bit of a place where those who engage in "interesting" activities congregate.   Notable districts include:

Approximate population : 8300 (does not include travelers, traders passing through, transients etc)

Port Ar is primaraly run by the Dragonborn Nobles of the city, a government that is completely corrupt, and politicians and guards alike care nothing for the tragedies of the common people. The crime rate is surpsingly low, but when it does occur, unless it interferes with trade, you are own your own.

The guard of the city, mostly Dragonborn, work to protect the city, bt as the tales go, not the citizens. There are many patrol boats near the docks

The main amount of trade comes from Guldaria to the north-east. It is believed that this close proximity is one of the reasons for both their attitude to their citizens and the fact that there are not many attacks from pirates and so on. In other worlds, this place would be treated like a frontier town, in terms of laws and trades.

Notable Locations: Saroh's You-Break-It-You-Buy-It Trinkets: Its operator is the clear-faced yet cheery gnome Female Saroh DiLitchamme. The place itself is alarmingly dirty, with sandstone shelves showcasing various strange items from weapons to robes, all of them magically enchanted in good or evil ways. Eternal Cocktails: Its manager is the young yet energetic halfling Female Shaninne Blood-redberg. The place itself is huge, with obsidian countertops showcasing potion recipes and ingredients. Jaid's Top-Shelf Lithium: Its operator is the plump yet dashing dwarf Male Jaid Fearanian. The place itself is tidy, with marble tables showcasing training services for fighters, barbarians, and monks.

Port Ar's main assets is coin and the various traders that pass through its docks and gates. By itself it doesn't have much to offer, but , is one of those locations where if someone cant get the thing they want, they know someone who can CAN get it, even if it takes tome t get here.

There are several political factions within Port Ar. None of them have official names but they can be grouped as follows:

The Dragonborn founders of Port Ar where not one for keeping records, as in their view with being a long lived species compared to others, there was no point. The city itself wasn't that old, only around 300 years or so. There was a port of somekind at this location before that, but what little records existed from that time where destroyed in a fire. This fire was what led to the founding/rebuilding of what would become Port Ar.

The architecture of Port Ar is a mish-mash of the various cultures that call this place home. Originally founded by Dragonborn , the older parts of the city reflect that cultures views on things - function over form, with their structures being designed around them. Over the years that influence has waned somewhat and newer builders are most aesthetically pleasing, yet still fit in with the harsh , what some might call ugly yet functional , style of the older parts of the city.

The sprawling city of Port Ar straddles the widest point of the River Aly that divides the vast soft-grassed Porkimkian Moors to the west.

The area outside of Port Ar is not particular fertile compared to others, but is serviceable. The main source of food comes from the ocean and fisheries, plus that which is brought in from trade. What does surprise people is there are several libraries here that contain information and books from several schools of magic and the supernatural, such as Necromancy, which surprises many people. It is belived that one of the rulers of Port Ar is, if not a necromancer, then is fascinated by the concept. 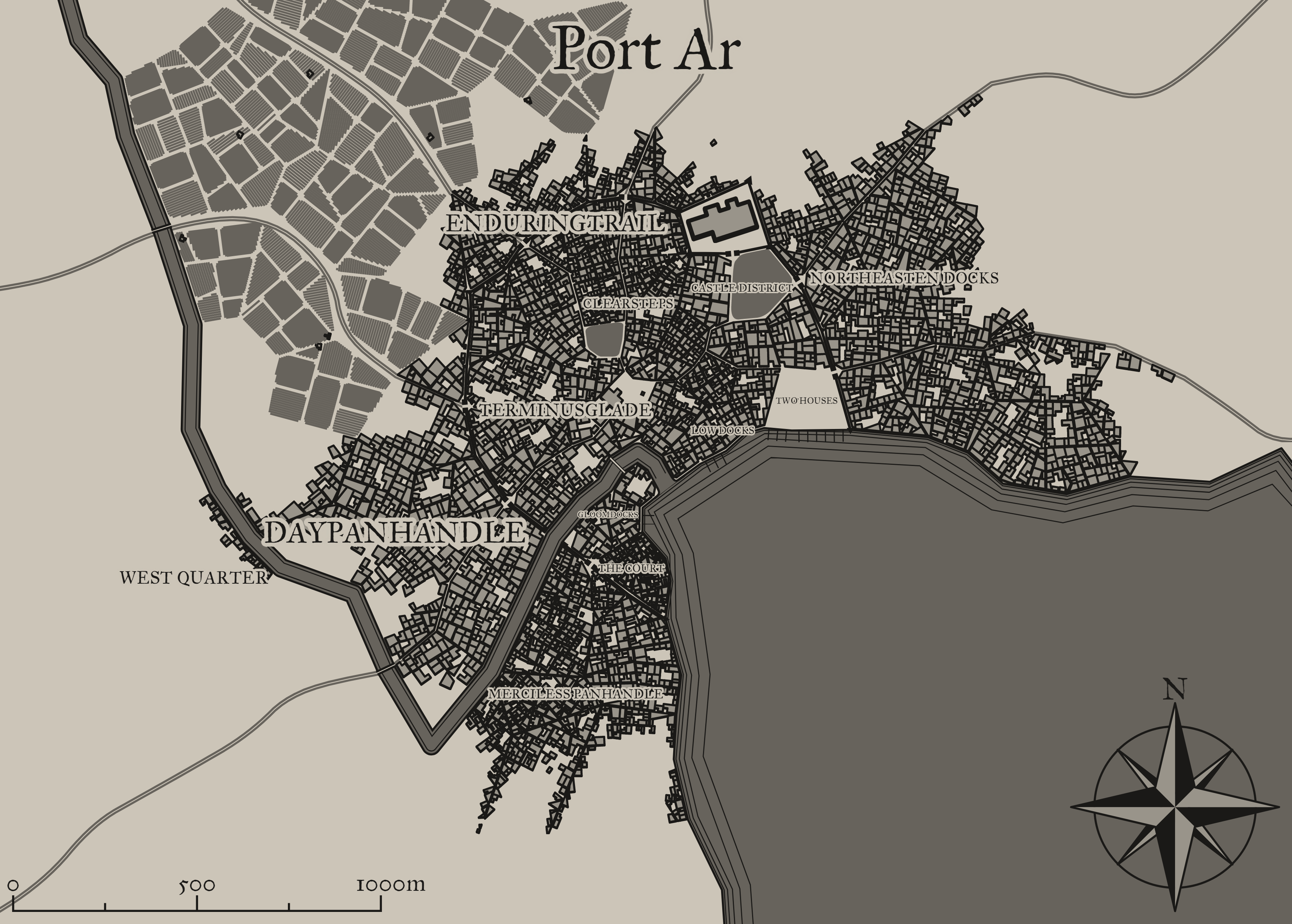 Remove these ads. Join the Worldbuilders Guild
Settlements of note