Born and raised in The Goliaths Bed brothel alongside her brother Captain Krenko and friend Gorga Ogrefist. Takes more along her mothers roots as a rogue. Mischievous but with a heart of gold.   Smitten at a young age with the tales of the sea from Vannick Ogrefist (Gorga's father,) Grobbi and Krenko set their hearts set on sailing across the ocean. They were taught by Uncle Vinny Vincenzo , although she never did show any magical ability.   After becoming old enough, and with enough begging, Grobbi's parents finally allowed her and Krenko to voyage with Vannick. While out as sea, Vannick taught much in the ways of sailing, and who to target, with extensive teachings on how to identify slaver vessels, and who was currently not on good terms with Waterdeep. After a few years, on the day of Grobbi's and Krenko's birthday, a Slaver warship was captured by Vannick and crew, and gifted as a birthday present. Some volunteers from Vannicks crew, and some of the rescued slaves chose to go with Grobbi and crew the newly dubbed Goliath Goblin.   Grobbi proved quite the capable captain, and within a few years had amassed quite the amount of riches, and had a copy of the ship made for her brother Krenko. They sailed together as a group of 3 ships with Vannick leading the way, freeing slaves and plundering the enemies of waterdeep. The spoils, after repairs where split amongst the crew, with most of Grobbi's going toward helping those less fortunate within Waterdeep, with some set aside for drink of course.   On an outing with Krenko and his ship, they where separated by storms and while alone, Grobbi was assailed by 3 slaver ships. The battle was long, but at the end of the day the Goliath Goblin stood victorious, but gravely damaged. After rescuing the slaves from the sinking slaver ships, Grobbi sailed back to Waterdeep before being hit by a massive storm, greatly damaging the ship even further. By sheer luck Grobbi and the crew sleeplessly managed to keep her afloat for 3 days and nights before limping the ship into the ports of Waterdeep. When the ship was deemed to damaged to repair, Grobbi had it partially deconstructed and turned into additional shelter for those rescued as an extension of the The Goliaths Bed.   Grobbi is currently doing odd jobs and trying to save enough money to purchase another ship to sail the seas yet again. Has known Dante Margaster for about 8 years due to his visiting of Aubrey at the Goliaths Bed. Good friends with Dante. 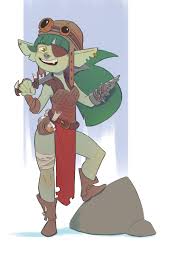