Clad in Khuzdûl armor that was forged to fit a human in Ázadmêre and given as a gift to her father, Kelaryn was a strong and strong-willed young elf. Armed with her father's finest long sword and a warhammer she crafted herself, Kelaryn accepted the call to adventure when the chance happened upon her. With a bag packed full of tools and naive dreams, the young fighter poised herself to combat the many worlds. Armed with the mithril sword she forged herself however, Kelaryn died in an attempt to slay the god Agrik.   Though she had died on the 10th of Alturiak in the Year of the Ageless One, 1479 DR fighting a minion of Agrik in an attempt to slay that very god. Kelaryn has been sent back, returned once more to the world of the living.

Kelaryn's adopted father Baern Stonehammer was the son of Durgeddin and his last heir. Baern knew little of his father or his homeland as he left his father's stronghold when he was just a young lad. In his stories, he told Kelaryn of his home, Khundrukar and once upon a midnight dreary; he told her of his banishment from it. He told her of how his father had him sent away in a great swarm of sorcery, he told her that his father sent him to Hârn of all places.   Often Baern looked to his mantle where the Black Maul rested and remembered his past. Occasionally, he'd take the maul and view its side before returning it, remarking that he missed the stone door of Khundrukar. Áthulus, where Baern built his forge and raised his adopted daughter, was a nothing little town that offered little in the way of education for the two outsiders, especially a young pointed eared little girl.

Kelaryn's first step toward becoming a Champion of Destiny was at the Fated Crossing. 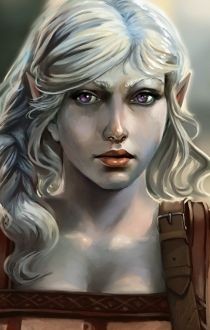