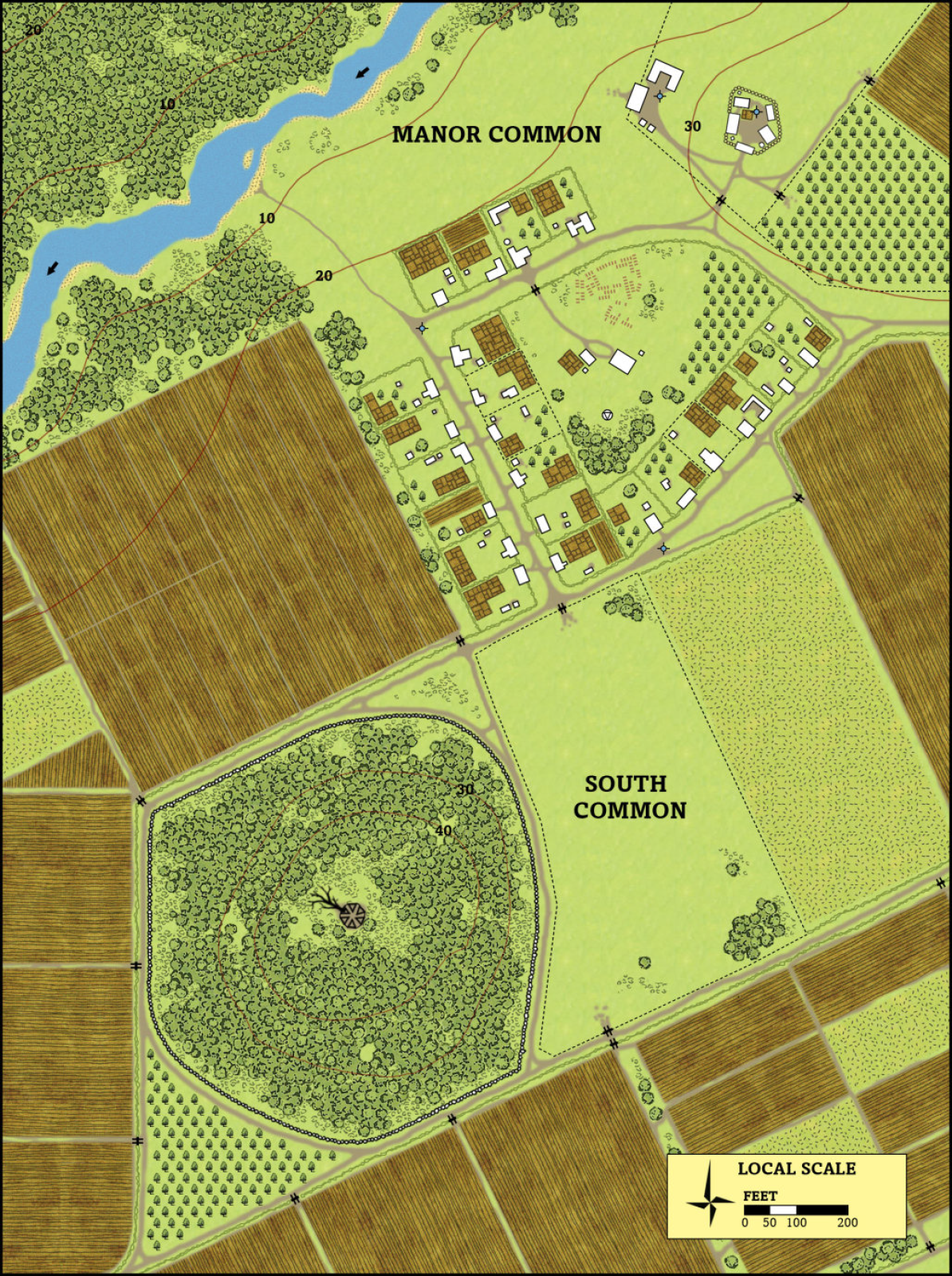 The village supports 23 households of 8 villeins, 9 half-villeins, 3 cottars and 4 free households. The free men in the village are a Peonian priest, a prosperous charcoaler, and a miller.

Arvan is the strict lord of the village. His young wife is the chamberlain who often acts on his behalf.

The town has guards that patrol due to threat of attacks by barbarians and gargun.

The village livestock consists of approximately 42 oxen, 46 cattle, 340+ goats, 100 sheep and 180 swine. Wheat, rye, and oats are grown while the orchards are mostly used to produce cider, although some of the fruits are sold in local town market.

The well fortified manor house is home to the ruling clan. The lord's barns hold the lord’s livestock as well as ale and cider shacks. There's a Peonian church that holds and outdoor shrine. A small graveyard is present on church land as well as a tiny orchard. In addition the church holds 60 acres of fields tended by the villagers.

Founded a century ago in 607TR, on the site of an older settlement, the village is located on the beyond the fringe of civilized land. This fief was also close to the main road between eastern and western Hârn which made it a hot bed for brigands.   Over the years the small hamlet survived a couple of barbarian raids. Then in 675, for his efforts in the Salt War King Torastra of Káldôr granted the fief to Sir Sadarn without really having the right to do so. Sir Sadarn was a young landless knight who, with his mercenary company had distinguished themselves during the military action.   Sir Sadarn fathered three true sons and one acknowledged bastard during his life before dying in 700, at the age of 51. Over the next four years the manor passed to both of Sir Maild's older brothers who both met premature ends without heirs. So in late 704 Sir Maild, third eldest of four brothers inherited the manor. Sir Maild is a strict lord and is prone to long absences. His young wife and new chamberlain act on his behalf during these periods to the villager's relief.   After his original chamberlain was killed in 707 TR and Sir Maild was rescued from an adventure, Sir Maild attempted to found a Council of Adventurers to act as advisers and protectors for the town. His hope was that the Council could create a just and prosperous government but the subversion of his new chamberlain found an end to that.   During a siege, Sir Maild fell and his family was slaughtered under the order of his new chamberlain whom took control of the village.

The manor is a steady, if not a rich fief with 1450 acres of land. The lands consist of 610 acres of woods and 840 acres of cleared land of which, 511 acres are used to support tenants and the remaining 329 are the lord’s demesne.

The untamed woodlands to the south have excellent hunting but with the drawback of an increased wolf presence.
Type
Village
Population
Estimated at 40 to 50 households.
Location under
Áthul
Owner/Ruler
Lord Arvan Wainwright
Owning Organization
Lordship of Áthulus
Characters in Location
Related Reports (Primary)
Related Reports (Secondary)

Remove these ads. Join the Worldbuilders Guild
Village of Áthulus