To reach the Deep Ethereal, one needs a plane shift spell or arrive by means of a gate spell or magical portal. Visitors to the Deep Ethereal are engulfed by roiling mist. Scattered throughout the plane are curtains of vaporous color, and passing through a curtain leads a traveler to a region of the Border Ethereal connected to a specific Inner Plane, the Material Plane, the Feywild, or the Shadowfell. The color of the curtain indicates the plane whose Border Ethereal the curtain conceals.   Traveling through the Deep Ethereal to journey from one plane to another is unlike physical travel. Distance is meaningless, so although travelers feel as if they can move by a simple act of will, it’s impossible to measure speed and hard to track the passage of time.

An ether cyclone is a serpentine column that spins through the plane. The cyclone appears abruptly, distorting and uprooting ethereal forms in its path and carrying the debris for leagues.
Tamlin felt a hand on him, felt his body shimmer into mist. The screams and shouts sounded far off. The walls around him appeared to be only gray shadows. Rivalen and Brennus stood beside him.   “The ethereal plane,” Rivalen said. “The dragon’s breath cannot affect us here.”
- Paul S. Kemp, Shadowstorm 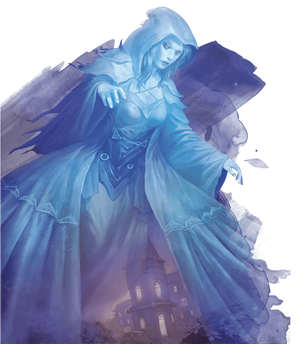