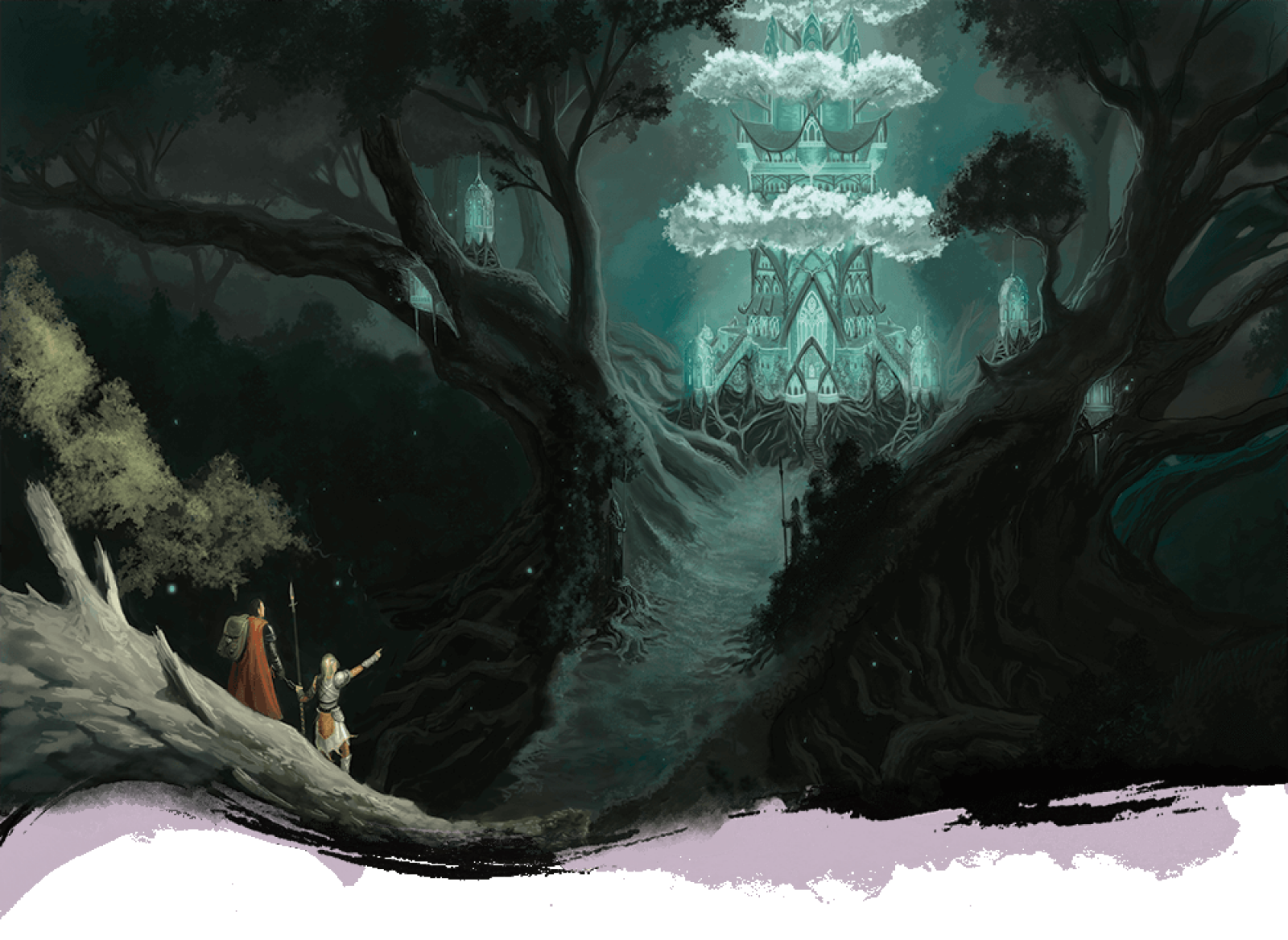 A planar grouping that encompasses every planet in the multiverse, though on some worlds the Feywild has died off. The Feywild is a land of soft lights and wonder, a place of music and death; its also called the Plane of Faerie but its not to be confused with Earth's Faerie Realms. It is a realm of everlasting twilight, with glittering faerie lights bobbing in the gentle breeze and fat fireflies buzzing through groves and fields. The sky is alight with the faded colors of an ever-setting sun, which never truly sets (or rises for that matter it remains stationary, dusky and low in the sky. Away from the settled areas ruled by the seelie fey that compose the Summer Court, the land is a tangle of sharp-toothed brambles and syrupy fens — perfect territory for the unseelie fey to hunt their prey.   The Feywild exists in parallel to the Material Plane, an alternate dimension that occupies the same cosmological space. The landscape of the Feywild mirrors the natural world but turns its features into spectacular forms. Where a volcano stands on the Material Plane, a mountain topped with skyscraper-sized crystals that glow with internal fire towers in the Feywild. A wide and muddy river on the Material Plane might be echoed as a clear and winding brook of great beauty. A marsh could be reflected as a vast black bog of sinister character. And moving to the Feywild from old ruins on the Material Plane might put a traveler at the door of an archfey’s castle.   The Feywild is inhabited by sylvan creatures, such as elves, dryads, satyrs, pixies, and sprites, as well as centaurs and magical creatures such as blink dogs, faerie dragons, treants, and unicorns. The darker regions of the plane are home to such malevolent creatures as hags, blights, goblins, ogres, and giants.

Two queens hold court in the Feywild, and most fey owe allegiance to one or the other. Queen Titania and her Summer Court lead the seelie fey, and the Queen of Air and Darkness, ruler of the Gloaming Court, leads the unseelie fey.   Seelie and unseelie do not directly correlate with good and evil, though many mortals make that equation. Many seelie fey are good, and many unseelie are evil, but their opposition to each other stems from their queens’ jealous rivalry, not abstract moral concerns. Ugly denizens of the Feywild, such as fomorians and hags, are almost never members of either court, and fey of independent spirit reject the courts entirely. The courts have warred at times, but they also compete in more-or-less friendly contests and even ally with one another in small and secret ways.

Fey crossings are places of mystery and beauty on the Material Plane that have a near-perfect mirror in the Feywild, creating a portal where the two planes touch. A traveler passes through a fey crossing by entering a clearing, wading into a pool, stepping into a circle of mushrooms, or crawling under the trunk of a tree. To the traveler, it seems like he or she has simply walked into the Feywild with a step. To an observer, the traveler is there one moment and gone the next.   Like other portals between planes, most fey crossings open infrequently. A crossing might open only during a full moon, on the dawn of a particular day, or for someone carrying a certain type of item. A fey crossing can be closed permanently if the land on either side is dramatically altered — for example, if a castle is built over the clearing on the Material Plane.

Tales speak of children kidnapped by fey creatures and spirited away to the Feywild, only to return to their parents years later without having aged a day, and with no memories of their captors or the realm they came from. Likewise, adventurers who return from an excursion to the Feywild are often alarmed to discover upon their return that time flows differently on the Plane of Faerie, and that the memories of their visit are hazy. You can use these optional rules to reflect the strange magic that suffuses the plane.

While time seems to pass normally in the Feywild, characters might spend a day there and realize, upon leaving the plane, that less or more time has elapsed everywhere else in the multiverse.   Whenever a creature or group of creatures leaves the Feywild after spending at least 1 day on that plane, you can choose a time change that works best for your campaign, if any, or roll on the Feywild Time Warp table. A wish spell can be used to remove the effect on up to ten creatures. Some powerful fey have the ability to grant such wishes and might do so if the beneficiaries agree to subject themselves to a geas spell and complete a quest after the wish spell is cast.
Stepping into the portal was like settling into a warm bath, though the chill didn’t fade from the air. At first everything muted — the roar of the river around the rocks below, the chirping of frogs and crickets on shore, the evening bustle of the town behind him. . . . A moment later, the world erupted into vibrant life. Frogs and night birds sang a chorus; the air was awash with autumn scents; the moonlight painted the flowers in iridescent blue, silver, and violet; and the rushing of the river became a complex symphony.
- James Wyatt, Oath of Vigilance
Alternative Name(s)
Eä
Type
Planar Sphere/Grouping
Location under
Die's Multiverse
Included Locations
Owner/Ruler
Eru Ilúvatar