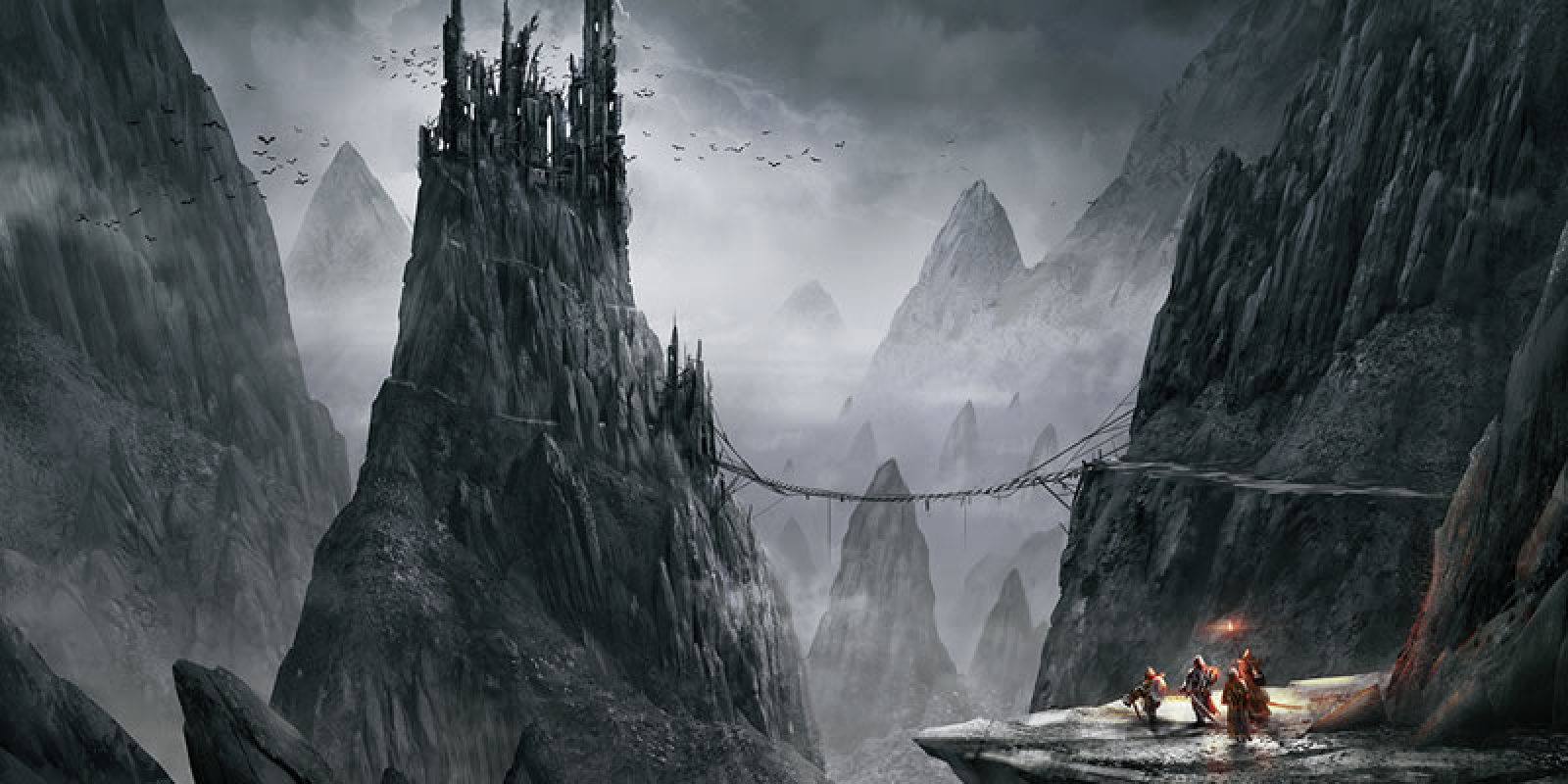 The Shadowfell, also called the Plane of Shadow, is a dimension of black, gray, and white where most other color has been leached from everything. It is a place of darkness that hates the light, where the sky is a black vault with neither sun nor stars.   The Shadowfell overlaps the Material Plane in much the same way as the Feywild. Aside from the colorless landscape, it appears similar to the Material Plane. Landmarks from the Material Plane are recognizable on the Shadowfell, but they are twisted and warped — distorted reflections of what exists on the Material Plane. Where a mountain stands on the Material Plane, the corresponding feature on the Shadowfell is a jagged rock outcropping with a resemblance to a skull, a heap of rubble, or perhaps the crumbling ruin of a once-great castle. A forest on the Shadowfell is dark and twisted, its branches reaching out to snare travelers’ cloaks, and its roots coiling and buckling to trip those who pass by.   Shadow dragons and undead creatures haunt this bleak plane, as do other creatures that thrive in the gloom, including cloakers and darkmantles.

Similar to fey crossings, shadow crossings are locations where the veil between the Material Plane and the Shadowfell is so thin that creatures can walk from one plane to the other. A blot of shadow in the corner of a dusty crypt might be a shadow crossing, as might an open grave. Shadow crossings form in gloomy places where spirits or the stench of death lingers, such as battlefields, graveyards, and tombs. They manifest only in darkness, closing as soon as they feel light’s kiss.

The city of Neverwinter in the world of the Forgotten Realms has a dark reflection on the Shadowfell: the city of Evernight. Evernight is a city of cracked stone edifices and homes of rotten wood. Its roads are made mostly of trampled grave dust, and its few cobbled streets are missing enough stones that they appear pockmarked. The sky is corpse gray, and the breeze blows cold and humid, bringing a chill to the skin.   The city’s living residents include mad necromancers, corrupt purveyors of human flesh, worshipers of evil deities, and others who are able to make themselves useful and crazy enough to want to live here. But the living are a minority in Evernight, for the bulk of the population consists of the shambling dead. Zombies, wights, vampires, and other undead make the city their home, all under the watchful eyes of the ruling caste: intelligent, flesh-eating ghouls.   Rumors abound that this foul place mirrors one city on every world.

In remote corners of the Shadowfell, it is easy to reach horrific demiplanes ruled over by accursed beings of terrible evil. The best known of these is the valley of Barovia, a demiplane resting in the Outlands, that is overlooked by the towering spires of Castle Ravenloft and ruled by Count Strahd, the first vampire. Beings of the Shadowfell called the Dark Powers created these domains as prisons for these “darklords,” and through cruelty or carelessness trapped innocent mortals in these domains as well.

A melancholic atmosphere pervades the Shadowfell. Extended forays to this plane can afflict characters with despair.
Riven stood in the uppermost room of the central tower of his citadel — a fortress of shadows and dark stone carved in relief into the sheer face of a jagged peak. . . . The starless black vault of the plane’s sky hung over a landscape of gray and black, where lived the dark simulacra of actual things. Shadows and wraiths and specters and ghosts and other undead hung in the air around the citadel, or prowled the foothills and plains near it, so numerous their glowing eyes looked like swarms of fireflies. He felt the darkness in everything he could see, felt it as an extension of himself, and the feeling made him too big by half.
- Paul S. Kemp, The Godborn
Type
Dimensional plane
Location under
Die's Multiverse
Related Reports (Primary)