A young man born of the respected Telvanos family, known for their service in the Light Knights and for their ownership of a set of weapons linked to the Cynosure itself.

Skinny and dexterous. He stands shorter than most Tieflings.

Long scar on the left side of his torso.

Born on Dust Walks in Yorn Durring 9269 Kaiven is the youngest child of Azza and Forcas Telvanos. As with most in the Talvanos family, his youth was spent in preparation for the when it would be his time to join the Knights of Creation. He spent many hours studing the ways of stealth, investigation, and the words of The Creator. He worked hard and did fairly well, but he could neer quite escape the shadow of his older sister, Maravien Telvanos. Despite just being a few years older than Kaiven, Maravien has accomplished a great deal of success. Wielding a holy lance from the Telvanos armory, she has flown up the ranks of the Light Knights. Every day Kaiven's parents would go on and on about what great deed she has done that week. Kaiven knew that he had every bit as much potential as her, and he was determined to prove it. But that determination has caused him to develop a habit of taking unneeded risks and acting before he thinks. This ended up costing him.   He had just been accepted into the knights and it was his time to prove himself, he was sent off with a small number of Light Knights led by Maravien to destroy a cult that has sprung up in the Arcane Strata. During the operation, Kaiven noticed one of the cultists going down a passageway by himself. Without telling the others Kaiven followed the man. After a brief struggle, Kaiven killed him and used his clothing as a disguise. Following the path down the rest of the way, Kaiven came to a large room with several cultists inside. They were preparing some sort of heretic ceremony. At first Kaiven just wanted to blend in and observe, trusting that the rest of the Knights would arrive soon. But then, one by one each of the heretics started speaking a vow in a language Kaiven did not know. There was a pause as the cultists looked at Kaiven, looking on expecting him to give the vow. He panicked and pulled out a dagger, driving it into the neck of a woman standing beside him. He yelled out "By the authority of The Church, I sentence you all to death for the crime of heresy." Even though the cultists were untrained, their numbers quickly overpowered Kaiven. Had Maravien and the rest of the knights not arrived, Kaiven would be dead. After the fight, Maravein healed and berated Kaiven, she told him what he had done was stupid, reckless and she told him to never make her worry like that again. Kaiven knew he fucked up, but didn't want to admit it, not to her at the very lease. He was taken before Favous Talvanos, the current head of the Telvanos family and his uncle. He was told that his actions nearly ruined a mission that had months of work put into it. Thus until he was able to redeem himself, he would not be allowed to claim of his families sacred weapons as his own.

Gotten a painting he made admitted into a middle of the road art gallery in the entertainment status.

Failed a very important assignment by rushing into a dangerous position without informing the rest of his team. Very nearly died that day after he was found and he panicked.

Honestly he just wants to show everyone he has just as much potential as his sister.

Good at improvising a lie or a plan of attack. However he lacks the foresight to plan out anything so all he does is improvise.

Favous Talvanos (Uncle) -Current head of the Talvanos family. A very stern but fair man. He is a man who likes to take his time and think through every possibility before committing to action. As such the Talvanos family has been less involved in politics the past couple of decades, but when they did get involved the end results were positive for them. He has held the position for the past 28 years.   Maravien Telvanos (Sister) - Maravien is only a few years older than her brother, but already she has had an extraordinary career. A skilled fighter and tactician. She has proven her ability to lead just about any mission given to the light knights. She is the best and she knows it. She is prideful and will boost about her accomplishments. She is also in constant competition with her brother, almost always winning.   Azza Telvanos (Mother)- Azza is a human who married into the family. More or less your average stay at home housewife. She does try and keep her kids from competing too much, more or less just to keep Kaiven from losing.   Focas Telvanos (Father)- Favous' older brother, was in the light knights for 6 years before an injury retired him. However he did not agree with retirement, thus after his first child was born he immediately jumped at the chance to start training her. And while he did help train Kaiven as well his focus has always been on helping Maravien. Today he lives by curiously through his daughter, acting as though her accomplishments are his own.

Enjoys painting in his free time. Usually landscapes. He will find a structure that is high up and could grant a good view of a given stratum, climb up there and spend some time looking out over the stratum. Due to the lack of light, it is impossible to see all the details of the view, but Kaiven will capture what details are available and imagine what he cannot see to fill in the rest. With his paintings he believes that he offers others sights people took for granted up on the surface. 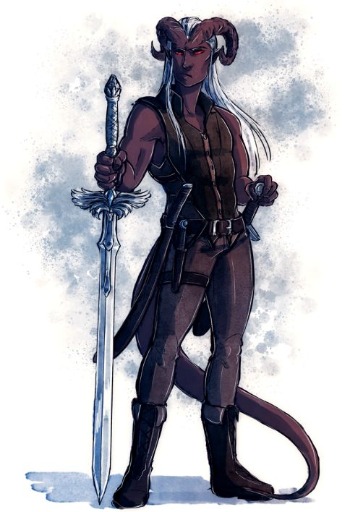