A headquarters platoon, with a logistics platoon, maintenance company and medical unit attached for non-combat support. Additional combat-oriented support units include a reconnaissance platoon, scout-sniper squad, and a combat engineer platoon. A heavy ordnance company is also attached for heavy fire support and aerospace defense and can include self-propelled artillery, anti-ballistic and anti-space systems.   Three infantry companies provide the heart of the Squadron, with each company incorporating support elements such as mortars, anti-tank and SAM missiles that can be distributed among their line platoons.   An Aerospace Drop Group, comprising mostly of UD-4L Cheyenne VTOL Dropships for in-system transport.

The organization of the rifle platoons represents the USCM doctrine of small, autonomous infantry units capable of independent action on a non-linear battlefield. The platoon commander, a lieutenant, is assisted by one or two Synthetics as technical and scientific advisers, and to assist as medics and drivers. It is divided into two sections, which are further divided into two squads of four Marines each. Each section is led by a sergeant and includes a driver for the M577 Armoured Personnel Carrier Also, during Drop operations, each section is assigned a UD-4 Dropship from the aerospace company team. Including the platoon commander and crews for the dropships and APCs, a full-strength rifle platoon would number twenty-five Marines..

Around two hundred total marines compromise the compliment of the squadron.

The Colonial Marines are likely best known for their use of the M41A pulse rifle, a futuristic, powerful assault rifle with an underslung grenade launcher, and for the M56 smart gun, a large machine gun which is actually worn by the user using a sophisticated harness mechanism. Also featured are the M240 flamethrower, the M4A3 pistol, and the UA-571C Sentry Guns, and the M577 A.P.C. 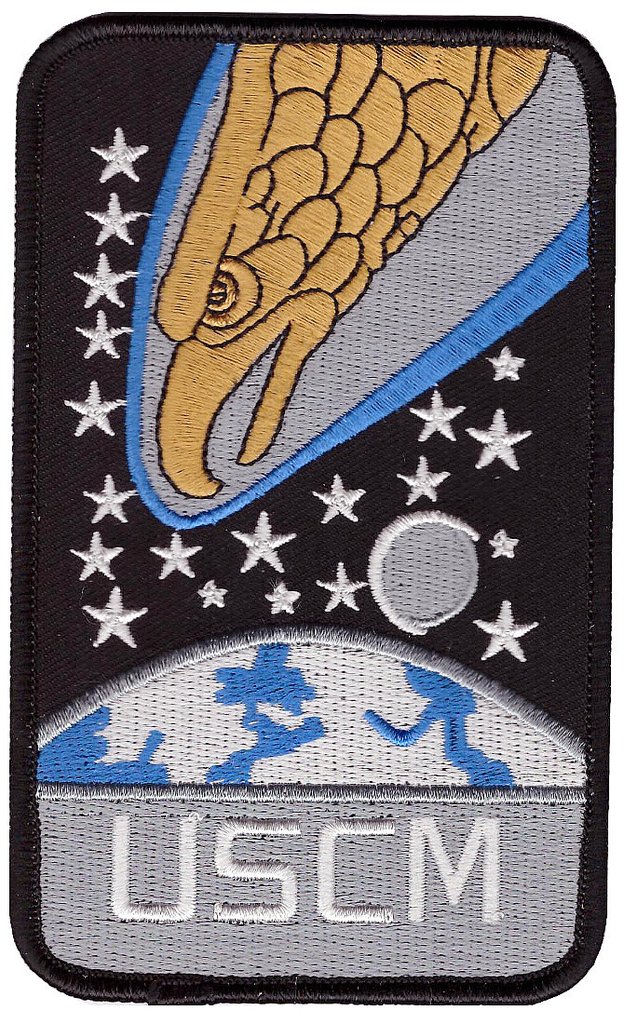