Jarvis has always been the assistant. There to help and always willing to do what was asked of him if they asked politely.   However, everything has been torn from him and while he has done the best he can to continue, he is not sure why he continues. There is no one to assist in a ghost town. However, to leave is to leave the bodies of his Master and Mother behind. What is a construct to do?   Now a group of adventurers have come into his town with the goal of finishing what his Master started. Maybe they can help him forge a new path. He must judge this group to see if they are worthy of the gifts his Master would have offered for the first time by himself. They reassure him that his life still had purpose as he could be the foundation for this town to be rebuilt around him.

Jarvis is a mix and match of material. Looks like he has been made and remade many time using whatever scrap material was around at the time.

With rakes for feet that connect to the beams of what might have been part of a wagon at one point, it looks like either he or someone else had rivetted on some metal to represent his knee caps. Continuing up to a slightly widder beam and you have the make up of his legs. The centre of him is hard to make up as metal encircles his pelvis, chest and general torso area. The metal is different sizes and are a mix match of material. His arms are similar to his legs. His hands have had careful care taken with their construction to give him the dexterity needed to be a helpful lab partner or gardener.

It might be a pot with holes made that allow for the blue lights that represent his eyes to peer through, giving people around him something to look at when they address him.

His ability to use magic and learn magic.   Through observation he can hold magical spells for a short time, but requires study to learn them permanently.   When in his Master's tower he is able to work with the building, controlling everything within it.

A torn drape covers his shoulders. His weapon appears to be a large hook sword and his shield is an old wagon wheel.

Jarvis started out as a simple construct that did what it was told to do and when. However, his Master added some components to the magic that allowed Jarvis to exist in order for him to develop and grow rather then remain static. His Master and his Master's wife had recently lost a child and found that having another was unlikely. In his grief, his Master made Jarvis to help his wife around the tower while she recovered.   At first his Master's wife rejected Jarvis in everywhere. However, due to his ability to learn and observe, Jarvis did little things for this woman and eventually she warmed up to him. She asked him to call her Mother and in the end started to teach him about her work as a druid.    They worked as a family, making things for the town. In the end, Jarvis became part of the process for verifying if someone was sent by Sunnis as he could identify if the gem was connected to candidate in the way Sunnis seemed to create the connection.    Less then a year ago the town was attacked and Jarvis was unaware of the problem from within the tower until it was too late. He was able to save his Master or Mother. So now he waits. He waits for those people to return so he can... He does not know what yet. However, they were very rude and need to be taught it is not nice to remove people from the world like they did.

Jarvis has no true gender, but accepted that his Master would call him with male pronouns and a male name. To Jarvis, it did not matter as his Master was always very polite in how he addressed him, and this was far more important to Jarvis then a social construction that his Master was using.

Jarvis is a highly accomplished construction. He developed as a mortal would through curiosity and became so much more then just a machine to fulfil the wishes of his Master. His desire for knowledge was encouraged by his Master and in the end led to him in developing the ability to not only do magic, but learn spells he observed others do, even if only once. This knowledge did not always stick, but through time, practice and study of the spells Jarvis found that he could permanently use the spells while negating the for any material components.    Because of this, his Master integrated the tower with Jarvis, expanding his senses and what he could do physically. Jarvis helped with the study and preparation of this, becoming an excellent lab partner for his Master.   Meanwhile with his Mother, he learned the gentler side to magic and how it can allow things to grow.

Jarvis developed the ability to use magic which his Master never designed him for. This was something he did himself and showed him that he could make his Master proud in ways he was unaware was possible until now. This opened Jarvis up to a whole new world and opened his Master up to the possibilities his creation could achieve.

Jarvis failed to protect his Master and Mother during an attack on their town. His lack of awareness of the town and what was happening within it meant he was unable to assist in defending the town. He tries his best to make up for it by caring for the town the best he can and keeping a watchful eye from his Master's tower. Within the tower he continues what his Master and Mother were working on at the time, while caring for their deceased bodies.

When death came via undead, abyssal and infernal means for his town and his Master it instilled something that his Master could never predict. Fear. Jarvis feared the power of these creatures and began to research into ways to keep them at bay. Sadly, many of it was superstitious nonsense, but Jarvis did find comfort in them. He modified the tower in many ways after the attack on the tower. Such as:  While fear is experienced as an emotion for many, for Jarvis it is a fact now taken into consideration. The probability of being attacked and losing the things that matter to you is now a possibility he had not calculated for. Now he calculates for it with the knowledge that there is more to this world outside of his tower and he will be ready for when it comes knocking again.

Jarvis is very intelligent and a diligent student. He has a keen observant eye. However, due to not being mortal or having grown up as a mortal, he will often state the facts of a situation without considering the emotions others might have about those facts. This means while he is not very wise when it comes to working with people, he is more then capable of working through a problem since he has no emotions to interfere with his reasoning.

"Manners maketh the man."    This is something Jarvis very strongly believes in. It is not hard to show others common decency or polite and to be rude and crude is just a sign of laziness. These behaviours however can be corrected and Jarvis has no problems with physically assisting with correcting those who show disrespect to himself, his Master's tower or the town his Master cared so deeply for.

Being rude in any fashion. Jarvis is reserved in his willingness to help or to go out of his way for strangers. However, he will always give them the time of day and be polite. Rude people who attempt to force their way into his home are violently removed if they do not stop when asked nicely.

His desire is to see his Master's goal of helping those who complete the goal of assisting Sunnis. He will protect the temple and town that holds the key to assisting Sunnis until someone is successful. After that he is not sure what he will do or if it is worth existing.

Able to work a loom to copy designs but has no ability to be creative.

Has a great amount of persistence and patience as long as he knows his goal.   Extremely polite and curious by nature. Happy to learn anything.

While having no traditional family due to being a construct, it does have a creator. This creator is Eric Humphreys who had a wife (Joli Humphreys) who needed some assistance with care after experiencing a medical trauma. In the end Joli took on the role of Mother for Jarvis.

Jarvis respects many deities as he can see objectively how they are impacting the world through their priests. He pays respect to four Gods in particular.

He will copy mannerisms of people around him, trying to get them at ease with him despite the fact he is not a living creature.

His voice is monotoned and his phrasing is very matter of fact. Sometimes struggles to connect the emotions with the meanings. 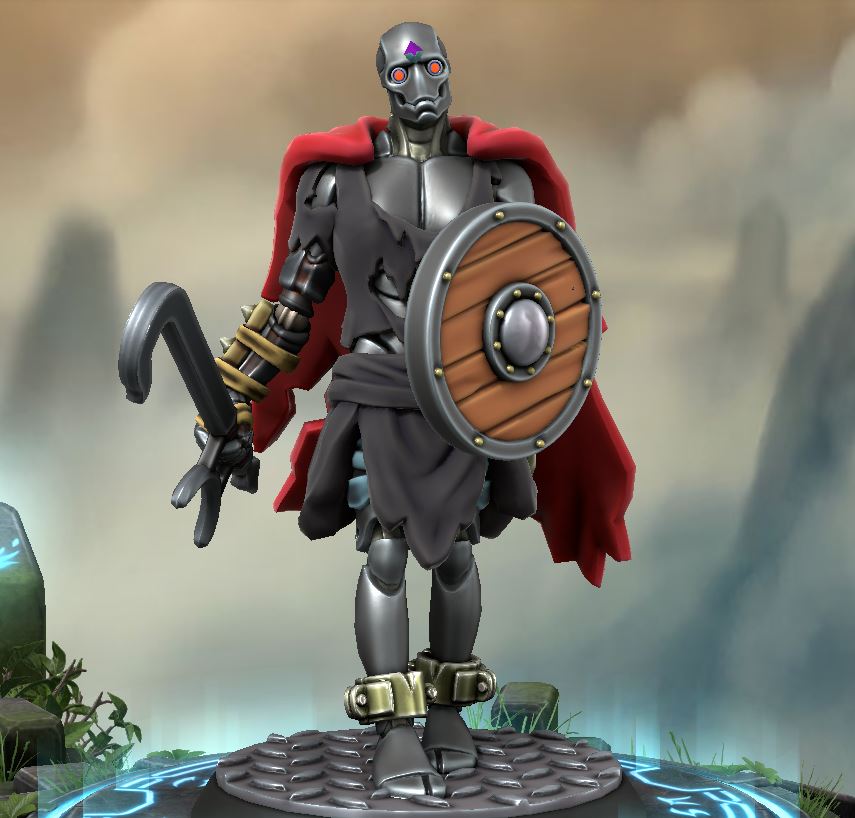 Alignment
Lawful Neutral
Current Location
Archestuel
Species
Shield Guardian
Ethnicity
Construct
Circumstances of Birth
Jarvis was created by his Master to assist him and his wife with their work after finding out they would be unable to have children together. Despite being a construction, his Master was careful to create a curious being that would learn and grow mentally
Birthplace
Archestuel
Children
Current Residence
Archestuel
Gender
None
Eyes
Two blue light shine in place of eyes. You're not sure if he is seeing you through them or if those are just to give you somewhere to look when talking to him.
Height
9 ft
Weight
1200 lb
Quotes & Catchphrases
"A tree will carry on after you are all dead and decomposed."   "Manners maketh the man."
Other Affiliations
Known Languages
Jarvis has little need for language due to his telepathic ability. However, he does know: Jarvis is currently learning other written languages so he is able to continue his studies that might not have a Brecht or Draconic translation avaliable.

Competition Homepage
In response to the prompt Choose a hero archetype - Everyman, Classical, Epic, Anti Hero, Byronic or Tragic - you’ve rarely or never used before, and create a character in your world that fits the profile!