The Library of Lantana

The Library of Lantana houses the largest collection of records in the kingdom. It is dedicated to, Ioun, Goddess of Knowledge and, with minor exceptions, all subjects of the Kingdom are welcome to enter. The Monks of Ioun maintain the Library. The Library believes that knowledge should be free for all, and that nothing should be secret.

The Library is home to thousands of tomes, scrolls and parchments. Each year, records from all major cities are sent to the library for storage and record. Ancient tomes are recreated by a team of monks who dedicate their lives to ensure no record is ever lost. All monks of Ioun are trained in the cataloging system, and strict protocols are adhered to, to ensure that every asset can be located at any time. No book, tome, scroll, manuscript, or piece of parchment is allowed to leave the library once it has entered.

The Library started as a small room in the back of an abbey. It has moved location twice since it was first established, and it's current location is ancient catacombs that were excavated for the purpose of building the library.   The main features of the library are:   In partnership with tinkerers from Yarrin, young monks are currently developing an index system based off the current cataloguing system, that will allow for faster retrieval of texts.   The public library is built atop the catacombs and houses only reproductions of texts kept below.

The main library is currently housed in an ancient multi-floor catacomb. All of the interred, under the guildance of the Temple of Hamar, were moved to a field and laid to rest. 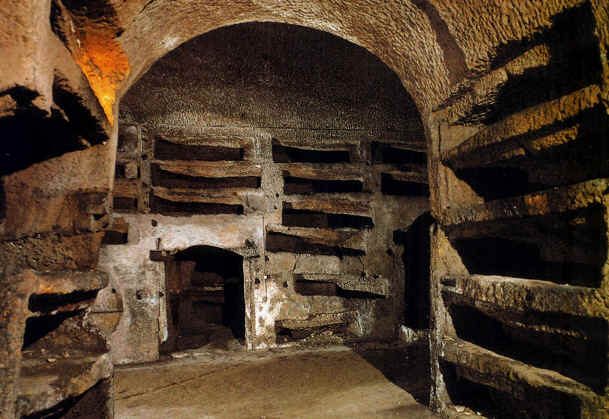 Alongside the shelving that has been built in the main chambers, many of the grave niches have been repurposed as shelves. Narrow, but high passages connect the main chambers of the library. The passages house the niches that were carved into the stone.

The central chamber is adored with sculptures and artwork, and a large, decorative Everlight chandelier hangs from the vaulted ceiling. Ornate rails run between the support columns to protect against falls, and staircases zig-zag down the northern and southern ends of the chamber. The lift is in the centre of the eastern side of the chamber. The floor is home to many reading desks, and the main catalog is also stored there.

With the exception of the central chamber, the third level has no chambers and only has corridors. New corridors are constantly being built but the process is very slow, to minimise dust. The stacks here hold texts that are yet to be catalogued, overflow from the main catalogue. This is also where restricted texts are stored, including books relating to ancient history, the occult and the arcane.

After a fire in the middle of the Second Age, it was thought the library should be redesigned to remove the need for torches. It was known that Dwarves owned a light that burned underground but never burned out. After being approached by emissaries from the library, Dwarves agreed to bring Everlight to the library in exchange for every piece of Dwarvish history the library held. A deal was struck, much to the chagrin of the Head Librarian.
Type
Library
Owning Organization
Monks of Ioun

Answering: "Describe the most impressive landmark in your world."
Visit Michaelrtm's Competition Page Check all other answers to this prompt Competition Homepage

I love a good library! Great work! The detail about the Dwarves making a deal to get back all of their history is great. Do the monks distribute the texts printed in bulk on the premises? Or are they also not allowed to leave the library?

I see the loophole there. The texts printed in bulk are distributed to cities and towns, so that knowledge can be spread far and wide.

Lovely artwork and a good read make for a good and interesting article !. Keep up the good work!