Many people assume that the magic most prized by the Echonur would be ice magic, but this is not true. Why learn to conjure ice when you are surrounded by it? Why learn to weaponize frost when all the creatures you encounter are acclimated to the cold? Instead the Echonur's most prized magic is, counter-intuitively, fire magic.
— Osborn Brightmoon, "Through Snow and Ice"


The Echonur are a very reclusive race of beings that generally dwell on the tops of mountains or deep within the frozen continent of Eralia. Initially discovered by a group of elven explorers they had no formal name for their own race. The name "Echonur" comes from an elvish dialect, meaning "cold people". Despite their reclusiveness the Echonur are known to be kind, hospitable and generous. Originally created by Auril, the Goddess of Ice and Winter, the Echonur reject her and her philosophy.

The Echonur are humanoids formed from living ice, usually a light to dark blue in colour. They are typically tall, averaging around 6-7ft, and are more slender and long-limbed than humans. Echonur faces are mostly blank, simply a solid mask of ice, with their sole facial feature being glowing, wispy eyes. They are able to grow 'hair' made of tiny icicles strung together, but it grows much more slowly than human hair does. Echonur are genderless, and usually seem rather androdynous to most humanoids.

Their unusual physiology offers many benefits to the Echonur. They are immune to all but the most bitter cold, and are completely comfortable in the snowy environment they call home. They are able to sustain themselves mostly on the magical energies of the world, needing only small and infrequent meals.

The Echonur have no particular need for clothing, but they adopted the practice from the elves. Their tendency is towards thin and rather skimpy clothing, chosen for its appearance rather than practicality. 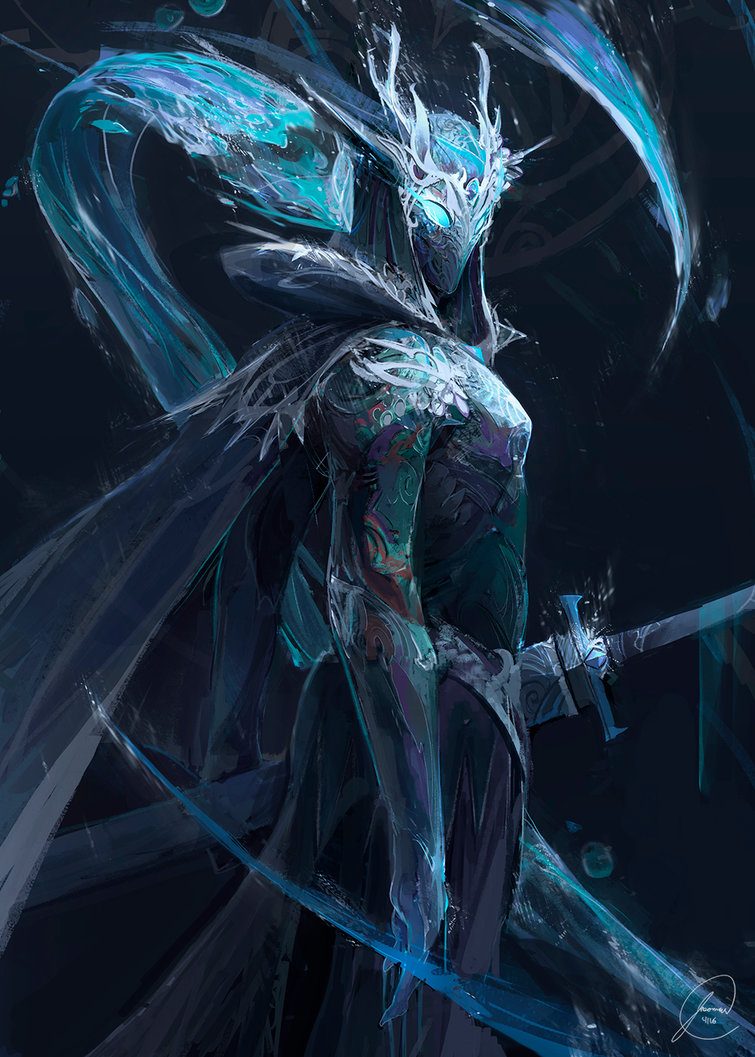 by Jason Nguyen
An Echonur shaman


The Echonur are a very community-focused people who live in small villages carved into glaciers or frozen ground. They are by nature kind and generous, and have a strong tendency to work together and support each other. Each village usually elects a High Shaman that serves as the village leader until their eventual death. The High Shaman's most important qualities usually include kindness, generosity, and knowledge.

Echonuran religion is based around a druid-like belief that all living things deserve life, and consequently the Echonur tend to avoid combat where possible. Although the Echonur were created by Auril they feel no allegiance to her, and in fact actively reject her. They disagree entirely with her philosophies and often work to counter her actions by providing aid to the more vulnerable humanoids targeted by her wrath.


The means by which Echonur reproduce is rather unusual. When Auril created them she gave them no natural means of reproduction, for she assumed she could simply make more as required. After the Echonur turned away from her they were unable to replenish the numbers they lost to the various dangers of the arctic wastes, and realised they needed some way to make more of their kind. Falling far short of a deity’s power they were unable to simply create adult Echonur at will, but eventually their shamans devised a substitute method. 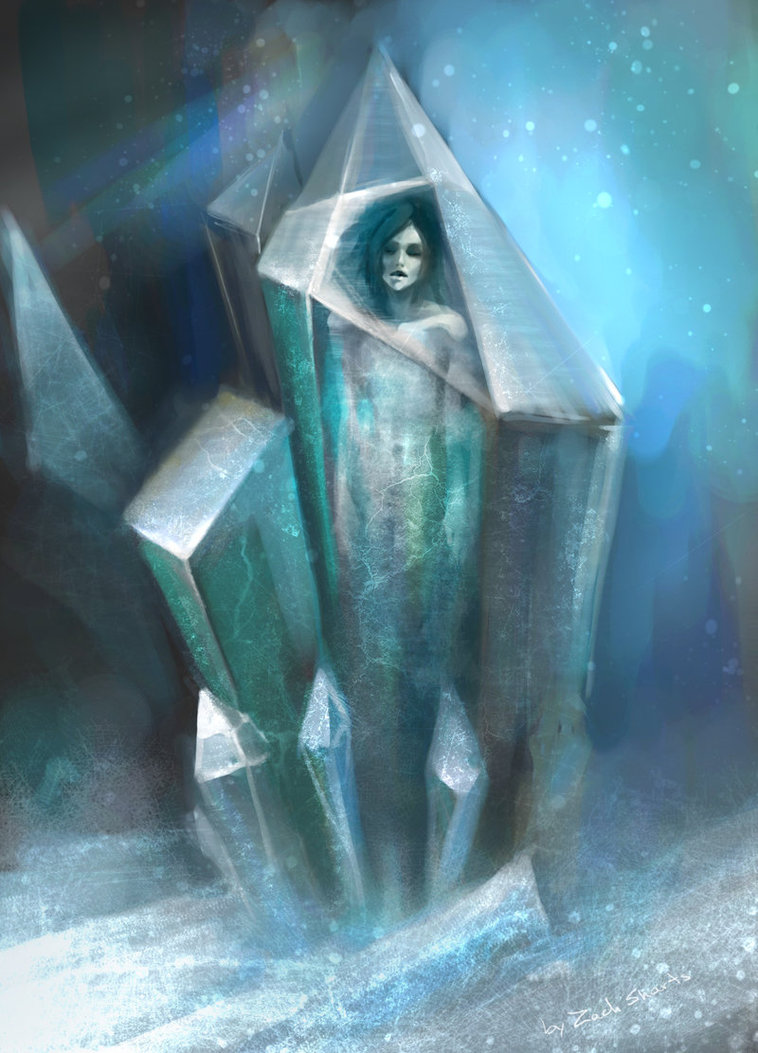 by Zach Sharts
An Echonur birthing crystal
A group of Echonur are able to combine their essences in special man-sized ice crystals, meticulously grown by the shamans from the icy substance of the caves they call home. At least two Echonur are required for this process – called a joining – with theoretically no upper limit on the number of participants. In practice joinings of more than five people are extremely rare. Each participant must sacrifice one of their fingers and allow it to be absorbed by the ice crystal. The fingers sink deep within the crystal, dissolving into their raw essence which then mixes together. After a shamanistic ritual the essence achieves true life, and within the crystal a new Echonur begins to grow.

After the joining the offspring grows within the crystal. They are unable to leave it until they are around ten years old, when they will be physically and mentally mature. Prior to this 'birth' the growing offsprings' crystals are all kept together in the safest, deepest chambers of the village. There they are raised and educated communally by the village, with their parents having as much or as little involvement as they like.

When they are able to leave their crystals the newborn are often possessed by a strong wanderlust, as for the first time in their decade of life they have independence of action. It is common for newborns to spend the first few years of their independent existence wandering the tundra and visiting other Echonur villages, or even the settlements of other races. Conversely, a few Echonur become overly-attached to the safety and comfort of their crystal, and after birth are extremely reluctant to leave the village at all.

The exact physical (and to a lesser extent mental) characteristics of the offspring are a blending of their parents’, and this has led to two main reasons for a joining to occur. One reason, and the more common one, is love for each other and actual desire for an offspring. This is often the case for Echonur in long-term relationships, who then go through the joining together and are usually heavily-involved in the raising of their offspring. Echonur are frequently polyamorous, so when the joining is one of love the participating group can be any size. The other main reason for a joining is one of practicality, often when the Echonur recognise their village population is becoming dangerously low. In such an instance Echonur with particularly desirable physical characteristics will often go through the joining in pairs, seeking to combine their strong aspects in a relatively controlled manner. The offspring of these joinings typically have little interaction with or attention from their parents.

The sacrifice of a finger from each participant lies at the centre of a joining. Missing a finger serves as a permanent reminder of one’s offspring, and is a visible symbol that one has contributed to the future of the village – and indeed the species. Theoretically an Echonur could go through ten joinings, sacrificing a digit each time, but such an extreme is very rare. Echonur typically bear the absence of their fingers with either pride or stoicism, but some do chose, for one reason or another, to seek out advanced magic to regenerate the missing digits. There is a common superstition among the Echonur that which finger is given to the ice influences the offspring. The exact details vary from village to village, but a common belief is that the middle finger helps the offspring be strong and that the little finger helps them be attractive. As more sceptical Echonur are quick to point out, there is little evidence that these beliefs have any grounding in reality.


The beings that would become known as Echonur were created shortly after the Naian Cataclysm, when Auril finally managed to imbue ice with life and sentience. She expected her creations to worship and adore her, but their sentience allowed them free-will. Her children rejected her, calling her evil and hateful, and fled from her presence. They made their homes in tunnels and caverns carved from ice, and built a society based on kindness and generosity. On the whole the hostility of the arctic meant they had few interactions with other races, but they did on occasion trade with coastal settlements.

Some centuries later they were 'discovered' by a group of elven explorers, who gave them the name Echonur ("cold people"). Since then the Echonur have become gradually more involved in the world. They interact more with the other inhabitants of Eralia, even acting to protect them from Auril's storms and blizzards.

The Echonur were originally created by u/Redline5E on r/UnearthedArcana. The original post can be found here.
Type Humanoid (Elemental)
Creator Auril

Your reproduction portion is amazingly written and covers a good portion of their lives! Very well done!