It is one of a few places a Traveler fears to tread. It's very unpredictability can trap one within it.
— Artur Neha, Traveler

Valjeta (VAL-he-tah) most unstable of the three continental islands of the Quassus Continent. It represents the most mountainous region of the continent. Earthquakes are common and sometimes violent. It is an ever changing region due to latent magic from The Great Collapse. In appearance, Valjeta is very dull and is generally an unwelcoming sight. Even the fast growing plants seem to have adopted the dull colors of the land. Animals are a rare sight as well- mostly birds of prey that flew in from other far away places.   Valjeta is the northeastern continental island of the Quassus Continent. To the south is the Continental Island of Lluvia, and to the west the Continental Island of Dammerung. 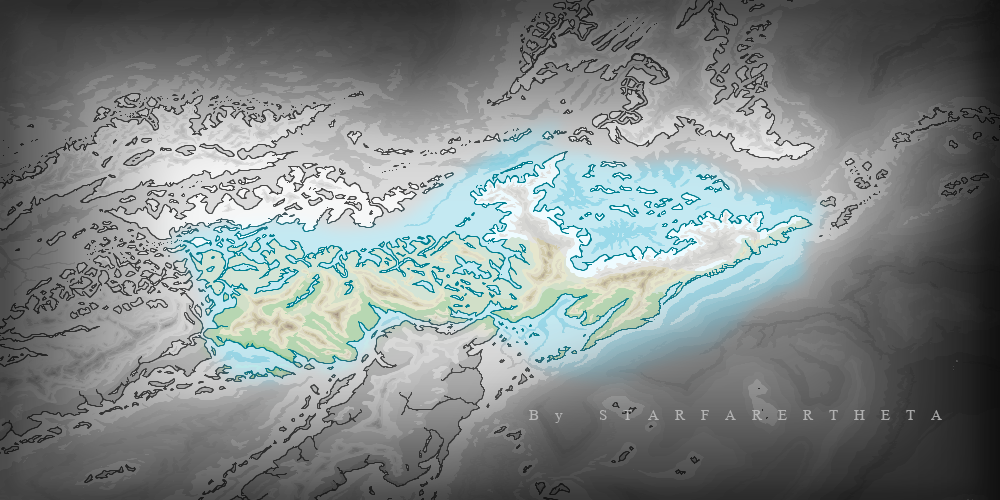 Valjeta is never the same from one day to the next. Mountains will change shape throughout the year and may not remain in the exact same place throughout the year. Rock slides and avalanches can be sudden and devastating to anyone or anything caught within them. No civilization has taken root in this region since the The Great Collapse. Few will travel the region as the land is unpredictable and making an accurate map of the landmass is impossible (though many have tried). Even the very shores of Valjeta will change.   The rate of changes varies from place to place, as well as the violence of such changes, but many steer clear of the entirety of the region as a safety precaution.

Magic Fields and Magic Storms are common in Valjeta, and may be partly responsible for the continuous changes along with inexplicable seismic activity. The more violent Magic Storms are also common occurrences as are Magic Deadzones. Some say that Valjeta is what the world was during the collapse, though others claim- perhaps more rationally- that it is one of few places that not only has failed to recover but has become even more chaotic.   The peoples of the Xeta Magocracy (a sovereign state located on Lluvia's eastern shore) believe that Valjeta is a sacred place and that one must understand it. The Xetans believe that mastering wild magic (along with dark magic) is the key to mastering the world.

Another effect of the wild magic that pervades Valjeta is that it has caused some pieces of the land to levitate. These pieces range from small stones to large boulders and they can be seen floating atop nearly the entirety of Valjeta's landscape. In some places entire sky islands can be seen floating high in the sky. In other places, only a few pebbles float just above the ground.   As with all other aspects of Valjeta's land, the floating rocks and islands are not permanent fixtures of the land even to the short lived. Some rocks and islands can fall from the sky at unpredictable moments while new ones rise to take their place at equally unpredictable moments. In 1055AGC, some people witnessed a particularly large sky island fall from above the clouds with a tremendous crash. They say that a great magic storm lasted for a week at the spot where the sky island fell. The sound of the crash was heard partway into the neighboring continental islands of Dammerung and Lluvia.

I shudder when I'm reminded of how quickly all that we built can so suddenly vanish.
— Larry Ironsoul, Bepaling Survivor

The Steady Town of Bepaling

Civilization depends on certain foundations to remain the stable through long stretches of time so that they may be built upon thereby allowing the civilization to grow. The very land, the dirt and rock settlements are usually built upon, is one foundation that cannot change too often else no house can remain standing. In Valjeta, no settlement can be established before vanishing with the land's unpredictable changes.   One settlement in particular illustrates this fact. In 977AGC, the Steady Town of Bepaling was established in the hope that civilization could finally establish a foothold from which it could change the wild and unpredictable Valjeta. Magic and clever engineering were employed in order to arrest the changes in the land to allow great structures and monuments to be built. For a time, it seemed as if Bepaling was a success. Even the common earthquake wasn't enough to shake the town apart. A monument was erected from the stone of the land by the people of Bepaling to celebrate the rapid establishment and continued stability of the town. Eleven years after breaking ground, In 988AGC, Bepaling had vanished. The harbor had become unrecognizable over night, now an unruly mass of sharp rock outcroppings and volcanic vents. With the exception of a fishing ship, none of the town's one thousand inhabitants were seen again.   There have been no further attempts at colonizing Valjeta since the disappearance of Bepaling. In fact, many who have set foot on its shores since then- briefly- report hearing distant cries and groans coming from the land. Many have wondered if they were hearing the lost souls of the people of Bepaling.

These plants grow very quickly, and they seem impossible to exterminate as evidenced by their continued existence on Valjeta.   It is recommended that one does NOT bring the seeds from these plants back to their home country.   Some have brought back seeds from Valjeta- knowingly or not- and now their villages and towns are overgrown and wild.

Wildlife that has been spotted on Valjeta includes birds of prey that flew in from elsewhere. It is possible the birds feast on anything that has recently died on the shores of Valjeta, including fish.   No one can explain the occasional flamingo flock.

I often wonder how much has been lost in that land. What artifacts we could have recovered if only we could get to them today. - Archivist Taenya Naïlo

Mysterious flamingos! :O   The story of Bepaling is terrifying and haunting. I can't imagine how scary that must have been for the inhabitants before they died.