The capital of Nilurra, and the first stage in its colonization, Ivdeshnika started as a research camp. Its lush forests and bountiful game remind many Syeurran's of their home in summer, though they sit on opposite poles. As impossible as it may seem for two countries on the other side of the world to share the same ecology due to the deadly Polar Spatial Storms connecting them.

Ever since the Veljudi first called Syeurra their home, the polar spatial storms have always been an unexplainable phenomenon. The rends in space would deposit people miles away from where they once stood, most no longer living or whole while some disappeared altogether. It wasn't until Kher Anditya's message traveled across the world and made it back to Syeurra that it was discovered that the storms connected the poles of Čavijet.

May it reach my brethren, though I may long be gone, that through the tear I have come to a place that reminds me much of the Valley in summer. Here it maintains a bit warmer, and for that, I owe my life. For the prey is abundant here, the herds have not yet learned fear. I had hoped it might be some secret place, but my knowledge of the land knows it not to be the case. I fear I am far from home. May my message make it safe.
— Kher Anditya


Upon the arrival of Anditya's message, delivered faithfully by the hands of traveling merchants, Syeurra stepped up its research into the spatial storms, inviting the world's masters in choromancy to study them. Eventually, it was discovered that a group of choromancers could stabilize the rends for a short period of time, though doing so is very taxing.
A group of 327 researchers, scientists, soldiers, and explorers, along with 14 choromancers were the first to make the journey over. These colonists named their settlement Ivdeshnika after the capital of Syeurra, Lhodeshnika. From this point on, many others made the journey over, attracted by this new and warmer territory and Ivdeshnika became the capital of what is now the country Nilurra.

The Syeurran colonists were not the first to settle in Nilurra. Not long after they arrived they made contact with the Veljudi natives who had inhabited the land for centuries before them. It is believed that their ancestors arrived through the spatial storms long ago, likely at different times and in different places but close enough that they were able to group together and survive. The natives carry the same peaceful nature as the Syeurrans and through trade and socialization, readily helped the colonists build Ivdeshnika. 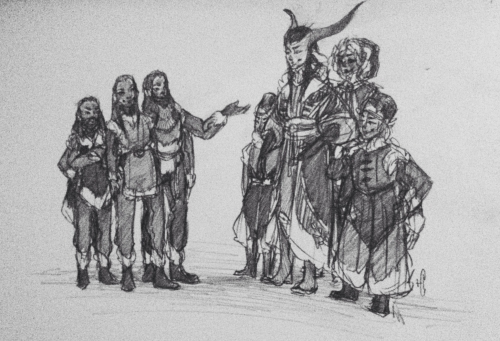 The Adhanshika Tribe was the closest to the settlement and mingled the most with the colonists. Today, many Nilurran traditions and beliefs have diverged from the Syeurran due to the influence of indigenous peoples' culture. Relationships between the Adhanshika and the Syeurran Veljudi have led to the Nilurran Veljudi to display a slightly taller and leaner frame and more ruddy skin tone than the Syeurran.

Due to the danger of spatial storms, most buildings are at least partly subterranean. Because these storms can occur at random, houses built above ground are at risk of being destroyed. These storms usually only occur in the atmosphere; it is very rare that a rend in space will dig into the earth, likely due to the fact that the energy required to transport all that mass is much greater.
Subterranean buildings are made of wood and sod. The wood provides support and insulation while the sod provides additional insulation as well as camouflage. Above ground, tents are made from wood and animal skins. The more permanent builds have stronger structures using more wood while temporary structures are simple tents of animal hide. 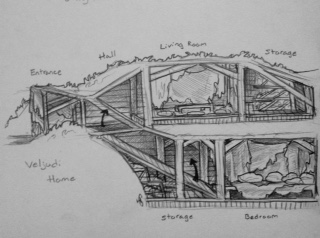 As much as I enjoy my research here, and the natives who have so kindly offered to host us; the Veljudi are Veljudi. I am much too tall for the burrows of theirs, constantly crouching and scraping my horns against the ceiling. At least these natives are a bit taller than those of Syeurra, and their common rooms quite spacious. But, oh how I wish to be back home where I can stretch my limbs.

The Veljudi are a communal species and this is reflected in their architecture. Most homes are linked to a large communal area and share one or more entrance. The communal areas are generally circular and have a domed ceiling that lets in light and lets out smoke from a central fire pit. Seating in the form of benches surrounds the pit. Most children and unmarried young adults share a large room while small families have their own series of rooms.

Most jobs in Ivdeshnika are research jobs as the colonists originally settled here for research on the storms and the research continues on to this day. Due to the necessity of choromancers in the research, many foreigners are here with work visas. Researchers are paid a generous wage and many spend a large portion of their income on importing goods from home.

Ivdeshnika's large port always has some activity going on despite the more remote location. The city exports a large number of precious gems and minerals sourced from the Tsigerin Mountains and the Cloudlocked Mountain Range that forms a natural border between Nilurra and Močavi as well as delicacies from the sea.

Fishing and aquaculture are the largest industries in Ivdeshnika. Nestled against the sea, Ivdeshnika's coast is home to many sought after forms of sea life. Hunting also provides some furs that are exported.

Communication and fast travel between Nilurra and Syeurra, the study and monitoring of magic radiation levels, as well as early warning detection for spatial storms all take place at the Research Gate. Named as such for the stabilization of spatial rends, allowing for teleportation between the Nilurran and Syeurran Research Gates, the Research Gate in Ivdeshnika serves as the headquarters for the NSSSDA and IMRRA.

Ivdeshnika boasts the largest and most active port in Nilurra with traders and researchers constantly coming and going. The port is hidden away from the deadly storms in a spacious cavern naturally formed in the mountainside. At the back is a large market hall. Many intriguing goods from around the world can be found here as it is the last stop before the ships make their journey back home.

To celebrate the Adhanshika Tribe which helped the colonists build up Iveshnika, a large cultural center was built to help preserve their tradition and culture. Inside, artworks and mythology are set out on display and the center regularly hosts events to invite others to partake in the culture.
Etymology The name Ivdeshnika is a reflection of the name of its sister city, Lhodeshnika, in Syeurra. It is formed from the words Iver (South), Deshni (valley), and Khai (summer).

Alternative Name(s)
The Bottom of the World
Type
Capital
Population
9,000

An ever-present threat at the poles of Čavijet, these storms rend space apart. Many people have suddenly found themselves caught in these storms and transported from Syeurra to the other side of the world. The ecology and indigenous peoples of Nilurra show that it is possible to survive the storms. The Syeurran colonists, in an effort to study these storms, took a risk and managed to stabilize a tear in space long enough to safely pass through, opening up new territory for exploration.

At no point in the course of my research did I think I would willingly travel through one of these hellish portals. Had it taken us to some hostile place, I assure you we would have been defenseless. I could hardly stomach any food for the whole week.
— A Veljudi researcher

Hey! This article is up for consideration to be featured, however, we have a new rule that all images need to be credited for an article to be featured. Do you think that you can credit the images in the head and the image in the quote? :3 https://www.worldanvil.com/w/WorldAnvilCodex/a/images

Oh wow, thank you for the consideration! The images in the article are all created by me, however, I will edit the article to make sure that is reflected tomorrow. Thank you for letting me know!

Incredibly inspiring! Thank you for writing and sharing.

I'm glad you enjoyed it!