Formed from the tear of Mellikala when she gave herself to form the sea, the Deljudi are a people possessing the body of both a human and a fish. They are Mellikala's guardians, the guardians of the sea and of those who leave us to nourish it.
— The Maloekian origin myth

The ancestors of the Deljudi were a fish with a magic sensory organ and the odd instinct of selective breeding to develop the traits of stronger species. There are many other groups of this fish that evolved differently based on what they chose to copy. Although this particular group may have switched targets numerous times over generations, they eventually settled on the humanoids that they saw walking around on the land above, whether it be the Patiljudi or the Čoljudi.   This particular group, before settling on humans had evolved to have an extended body with an extra set of limbs likely from copying some form of sea serpent. After setting their sights on humans, the foremost set of fins began to become bonier, eventually separating into odd, webbed fingers. Similar developments developed with their torso and head, gradually becoming more and more human-like. However, they were still far off.

When a group of them were seen offshore by some fishermen they were hunted down like monsters. Unlike previous times where their evolution was beneficial without much side effect, this new development had brought them the unwanted attention of humans. They did not give up their goal, however, and instead became more cautious when watching the humans and more attentive to detail.   Eventually, they bore a close enough resemblance that the humans did not notice anything odd about them when spotted at a reasonable distance. In fact, seeing what they thought were people floating out in the ocean, they even tried to rescue them.   With their upper body resembling that of a human, their lower body hadn't changed very much in appearance. Not being able to get close to land, they did not have the chance to develop legs but at this point, there was no need to. By now, they had developed higher intelligence and knew that they would be best if they stayed where they were; away from the dangerous humans. At this point, they began to socialize more. Instead of selectively breeding to portray a certain trait, they formed communities, started using their increase in intelligence, and developed the final traits they have today, such as their large display fins, through the development of their culture and social structure.

The Deljudi is a species that combines the property of fish and humans, with the upper body similar to that of a human.

Display fins where a human's ear would be are used to display emotions. Their actual ears are similar to a fish's and are located behind the fins.

Two eyelids allow them to protect their eyes while still being able to see. Their eyes are more rounded and do not have eyelashes but instead a dark coloration like eyeliner around the eyes.

They have noses that allow them to breathe out of the water but they are slits that can be sealed. Gills located on their torso are their usual means of breathing. They cannot be still for too long as the movement is necessary to provide enough oxygen to their gills.

Unlike aa human's muscular tongue, the Deljudi have a basihyal, a fold on the floor of their mouth, that acts similarly to one. Because the basihyal does not have the range of motion of a regular tongue, they are unable to pronounce consonants that require the tongue to touch the roof of the mouth (i.e. l, k, r).

Their inflatable neck pouch can be used for storing a small amount of food over long distances, or to provide a small boost to buoyancy but is more commonly used in dominance and mating displays. During the mating season the normally pale pouch will turn a vibrant color in males who inflate them to put them on display.

The Deljudi's hair has thin whiskers mixed in that contribute to their senses. The length of one's hair is directly related to one's magic capability and will not grow back if cut.

Because they are still biologically fish and are not mammals, they do not have mammalian-specific parts such as breasts, nipples, or belly buttons.   Some individuals have brood pouches. Both sexes have the ability to birth offspring if certain genes are present (see seahorses) - those that are able to, have a brood pouch. Both genders still have their respective reproductive organs even if the brood pouch is present.

There are two possible ways of fertilization depending on the presence of brood pouches on either partner and gestation is similar to that of a seahorse.   If the female has a brood pouch and the male doesn't, fertilization will be similar to that of humans. If it is vice versa then the female will transfer her eggs to the male via oviposition. If both partners have a brood pouch then the one who takes the eggs is decided by social position, job, or a game of chance if they are kind enough not to fight over it.

During gestation, the eggs are embedded into the wall of the brood pouch and the host provides them with prolactin and other additional nutrients. Gestation lasts for approximately 220 days.

The Deljudi are somewhat Ovoviviparous meaning that the embryos develop in eggs inside their host for a period of time. Two-thirds of the way through gestation, the host releases the eggs in a communal nursery of sorts. This is because if they were to be left in the body until ready to hatch they would become too big for the host's body and that the Deljudi were mainly nomadic before they settled on the sea serpent. Leaving the eggs by themselves was not an option so they developed a halfway point.   Deljudi usually give birth to two or three children and the eggs are elongated ovular shapes. After they hatch the young are taken care of by those of a lower class or slaves.

Most Deljudi tribes live on collections of debris that have attached to the Četnamoré, a giant sea serpent. These form seasonal islands which appear when the mass protrudes from the water's surface. Occasionally, when the section of the serpent that they live on goes to deep or stays above water for too long they will vacate the area and travel nomadically for a short period of time.   Those that do not live on the Četnamoré live in underwater caves. When traveling they may also burrow into the sand to sleep.

The Deljudi are piscivores, mainly eating fish caught by net, trident, or manipulating the flow of water. They may also cultivate shellfish to sustain them when their home is in a baren area.

Most Deljudi tribes are located on the Serpent's Ring as that is the path that the Četnamoré travels. A large group of them also live in the underwater caverns of Maloeku, however, they can be found all over the oceans of the world.

A mechanosensory lateral line system, as well as the whiskers in their hair allow them to detect movement, vibration, temperature, and pressure in the water.

Members of the Deljudi have and are addressed by only one name. This name is short, usually only a few syllables, and in tribes that have some contact with those on land, contain many consonants. Those that very rarely make contact with others usually have just vowels in their name, and was the most common way until contact. This change came about because those on land, who already had a hard time understanding the language, could not identify names when brought up in conversation. Thus, consonants were added to differentiate.

The Deljudi live in large tribes of around 70-120 individuals located around the world. Each tribe has members that display a certain set range of traits from the many possible in the species as a whole. Thus, it is quite easy to differentiate between the tribes.   The most well known is the Maloekian tribe which freely interacts with the people of Maloeku. They have friendly relations with the islanders and will collaborate with them in fishing and other such activities around the water, the most important being their underwater burials.

There isn't a strong concept of gender in Deljudi culture as both genders have the possibility of having to carry offspring and there are very little physiological differences between them.

The Deljudi did not begin wearing any form of clothing or decoration until they began trading with those on land in 1536 S.D. With the purchase of light clothes and jewelry, they slowly began to develop a habit of wearing decorative and ceremonial clothing. 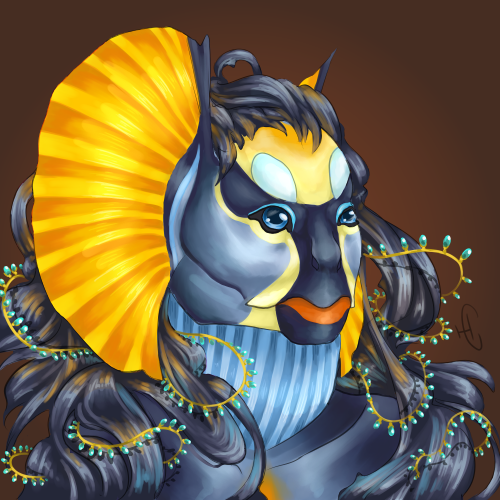 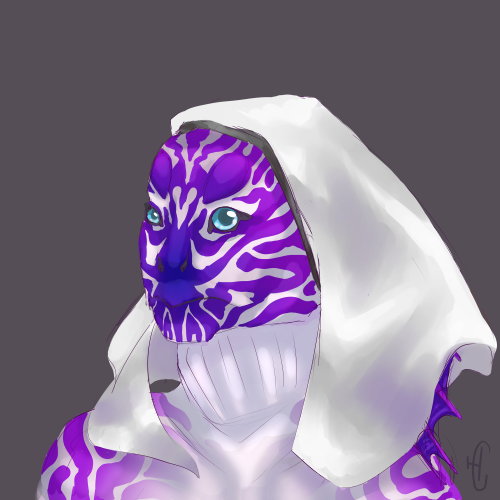 Slaves have a cloth covering their head and their display fins pinned down to show submission. They do not wear any decoration.

Because both sexes can have brood pouches and thus lay eggs, neither males or female have an inherent higher social position than the other. Instead, social hierarchy is determined based the length of their hair which correlates to their magic capabilities at birth. If something happens that would cause them to fall in rank then they would have to cut their hair to keep it at that rank's length. Furthermore, slaves have their heads shaved and their display fins hid under a cloth.

Most Deljudi do not mate for life and will instead only hold a partner for one breeding season. Thus, very few form families and almost all eggs are protected communally. The hatchlings are either raised by the community or, if they have high magic potential, may be adopted by a member of high rank whom they will study under.

The Deljudi have a belief that if you are not capable of performing a certain level of magic then you are weak and useless to the tribe. Magic capability is directly related to one's length of hair; thus, shortly after birth, those with short hair will have their heads shaved and enter a life of servitude.   Slaves must have their display fins pinned down and covered so that they always show submission and are not permitted to wear any decoration. Their duties may include serving someone directly or doing menial tasks that benefit the tribe. Although they do not have free will or the ability to contribute their voice to discussions they are not mistreated or abused, except in rare cases, and are offered the basic comforts that other tribesmen get.

During mating season, partners perform intricate dances in which they circle and entwine around each other. It’s quite a spectacle to see if you’re lucky enough.

It is forbidden to cut another's hair unless they have been formally declared a slave.

Most members of other sapient species will go their whole life without seeing a Deljudi although they might catch a glimpse of one if they frequent slave traders or illegal menageries.   Only in a few locations such as Maloeku will the Deljudi regularly interact with others.   Otherwise, sailors are the only ones who will often see the Deljudi. There have been many instances in which sailors have been saved by a passing group of Deljudi after a shipwreck or an attack by sea creatures.   Deljudi tribes in the waters around Maloeku help tend to the Coral Graveyard and maintain the Barrier Forest of Corpse Kelp 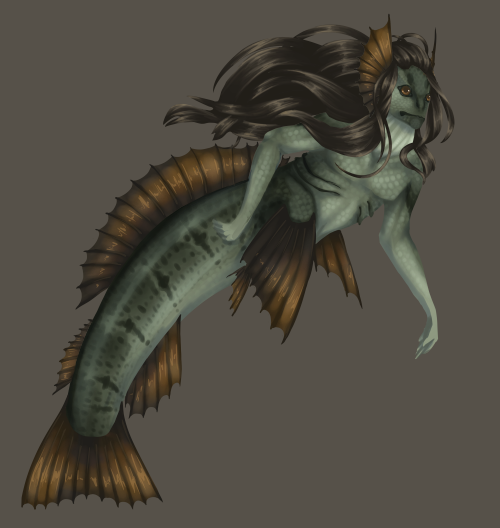 Scientific Name
Della della
Lifespan
40 years
Average Height
7'2" - 9'3" including tail length
Average Weight
70 - 100 lb.
Body Tint, Colouring and Marking
A large range of colors and patterns have been recorded with members of a single tribe usually displaying only a small portion of them.