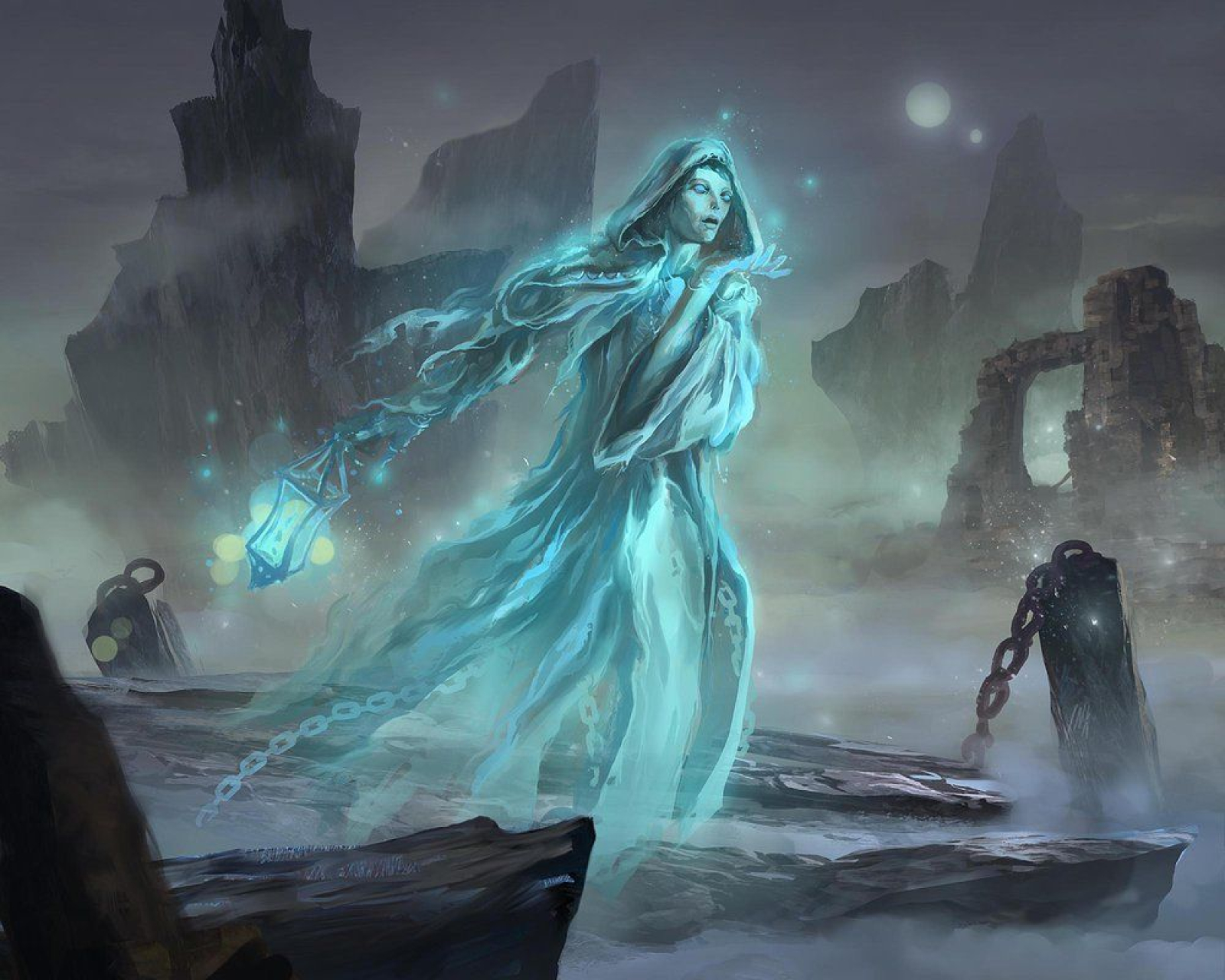 Ghosts are the spirit of a deceased sentient being and are a common occurrence throughout Aurelimoore. They are a incorporeal type of undead generally resistant to conventional weapons, while magical weapons tend to bypass these resistances.   Ghosts exist on two planes, both the material and the astral plane. A ghost's connection to the material plane is severed when destroyed, but in a few days the ghost would usually returns unless its remains are destroyed, or the business holding its connection to the material plane is completed. Ghosts are a repetitive nuisance for those who live in one's particular haunt.   Some ghosts are merely memory fragments, reenacting moments of their life on repeat with no real sentience, while others are fully sentient and are connected to the material plane by unfinished business. Not all ghosts are evil, but neither are all ghosts good.   A ghost could also be controlled of wizards, sorcerers, liches, etc. In this case the ghost was finally put to rest when destroyed on the material plane or the master of the ghost died. This is rather uncommon though, because to raise a ghost uses a lot more magic than raising a regular undead. A ghost's weapons typically consist of whatever weapons they carried in their mortal life, and maybe a spell or two if they were a wizard or sorcerer.

Ghosts are often motivated by a specific agenda that allows them to cling to unlife, often related to the pursuit of vengeance or punishment of an individual. Jilted lovers or betrayed friends or victims of cruelty may become evil in their desire to punish those that made them suffer, and cling to unlife until their need for ruthless justice is sated, even long after such a thing can be reasonably accomplished. One specific kind of cruelty that often results in a ghost is a failure to show proper respect for someone's remains -- a ghost may animate near the location of its body, becoming resentful and hateful of the beings who still live. Those who were monstrously evil in life or whose deaths were particularly emotional, may also leave an echo of their existence as a ghost.   Ghosts haunt particular places relevant to their agendas, and this may or may not be the same location they died in.   Ghosts are largely solitary, but in rare circumstances, entire groups of people can become ghosts at once. A famous example would be ghost ships, ethereal vessels which sail the seas crewed by ghosts, and encountered in the presence of St. Elmo's Fire manifesting within a ship's rigging.   Ghosts may be laid to rest by satiating its desires, such as by burying its remains or extracting vengeance on its behalf. A ghost's needs can be quite demanding, however -- many heinous crimes have been committed by those trying to lay to rest these hateful undead.   As an insubstantial creature who remains in the material world due to their desire to accomplish a goal, ghosts may be considered a type of geist.


Ethereal Sight. The ghost can see 60 ft. into the Ethereal Plane when it is on the Material Plane, and vice versa.

Incorporeal Movement. The ghost can move through other creatures and objects as if they were difficult terrain. It takes 5 1d10 force damage if it ends its turn inside an object.

Horrifying Visage. Each non-undead creature within 60 ft. of the ghost that can see it must succeed on a DC 13 Wisdom saving throw or be frightened for 1 minute. If the save fails by 5 or more, the target also ages 1d4 x 10 years. A frightened target can repeat the saving throw at the end of each of its turns, ending the frightened condition on itself on a success. If a target's saving throw is successful or the effect ends for it, the target is immune to this ghost's Horrifying Visage for the next 24 hours. The aging effect can be reversed with a greater restoration spell, but only within 24 hours of it occurring.

Possession (Recharge 6). One humanoid that the ghost can see within 5 ft. of it must succeed on a DC 13 Charisma saving throw or be possessed by the ghost; the ghost then disappears, and the target is incapacitated and loses control of its body. The ghost now controls the body but doesn't deprive the target of awareness. The ghost can't be targeted by any attack, spell, or other effect, except ones that turn undead, and it retains its alignment, Intelligence, Wisdom, Charisma, and immunity to being charmed and frightened. It otherwise uses the possessed target's statistics, but doesn't gain access to the target's knowledge, class features, or proficiencies.

The possession lasts until the body drops to 0 hit points, the ghost ends it as a bonus action, or the ghost is turned or forced out by an effect like the dispel evil and good spell. When the possession ends, the ghost reappears in an unoccupied space within 5 ft. of the body. The target is immune to this ghost's Possession for 24 hours after succeeding on the saving throw or after the possession ends. 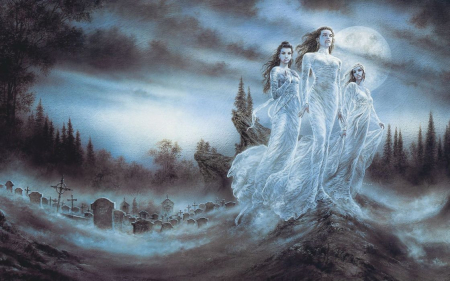 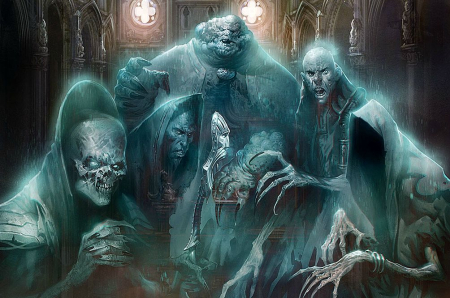 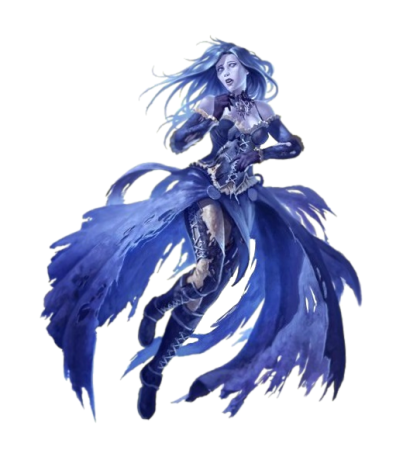 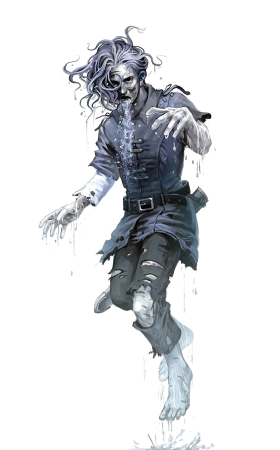 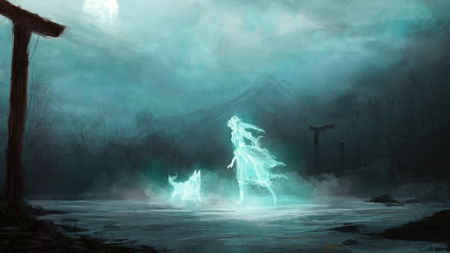