Terra and Forice have different "money" they officially trade for even though most of the time there would be an agreement on what's the exchange ratio and either side would accept the other's money even if not turned into the place's active currency.


For Terra there are a couple of different - as some countries insist on their own - however on the territorry of Kaloterra's continent there's less than ten countries with their own currency. The others use pawcos & leons. 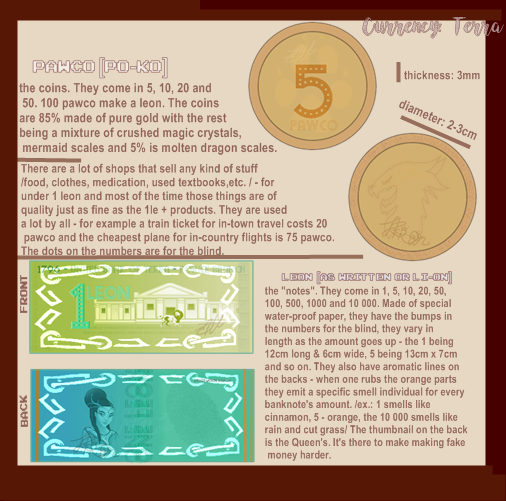 
Anyone arriving on Terra for the first time - if they get in a country that provides socializing agents - will be advised by their agent to always keep both their cards and at least 20Le in their wallets as - in case of emergency - there might be low stock on products in the stores and when that happens the clients who can buy with cash have advantage and are much more likely to get out with a full basket.

In Rockdoors - specifically - upon their arrival, a family /of, let's say 2 parents and 1 child/ receives a couple of cards loaded up by the bank with a starting amount of money. They get:

For convenience the entire Forice uses the same money. While there are countries who have expressed their desire to have their own currency it's much more convenient to use the one already set  by the dracoss. 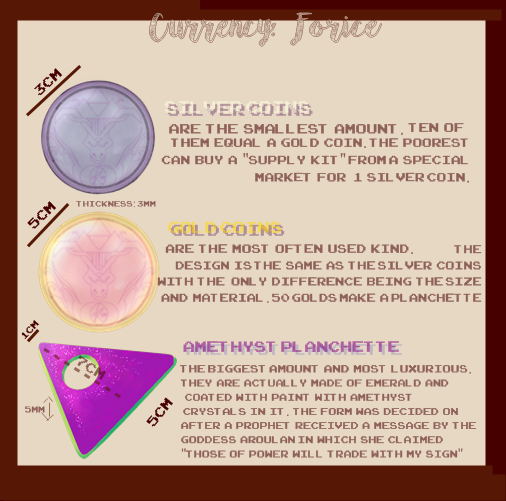 Anywhere in Forice - even in the mines or in the dense forests of the elves and centaurs - or in the desert that spreads north of Hellgate volcano - there are "automatized" /more like "magic-ized"/ market stalls that operate a lot like vending machines - they look like easy pickings for any robber or simply anyone who wants to get something but if you reach to grab something without first dropping money in the provided slot the bottom of the cart will open up and swallow you whole "arresting you" until the nearest town's guards come to check out the "naughty box" as they call it.

Those stalls can't be cheated either - dropping stones or other flat things of weight equal to that of the coins will only activate the "swallow" mechanic as well.  IF someone wants to exchange money at those stalls they are to press their hand to the letters of the "exchange" word on the wood and a specially trained dragon will fly in a couple of minutes to perform the trade.

Every coin AND the banknotes AND the planchettes have in their construction a "tracking device" - looking either as an even smaller coin or shiny fibers on the banknotes' edges. 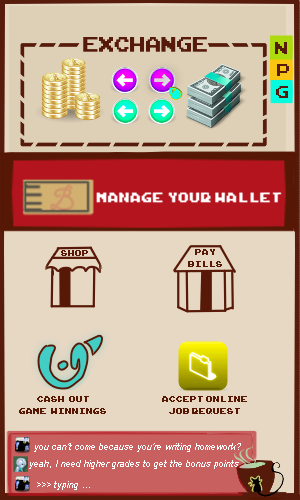 Item type
Currency & Deeds
Weight
for pawcos - 35gr; For silver coins - 50g, gold coins - 65g, planchette - 70g
Raw materials & Components
The coins and planchettes are made of as pure metals as possible - not just because of the idea of purity but also because of religious and pride-driven reasons. The water-proof paper for the banknotes is made of seaweed fibers and underwater trees and it's mixed with a very light pearl coating for shine and hairs from the Barrier dragon - for tear and  burn resistance and for weight.