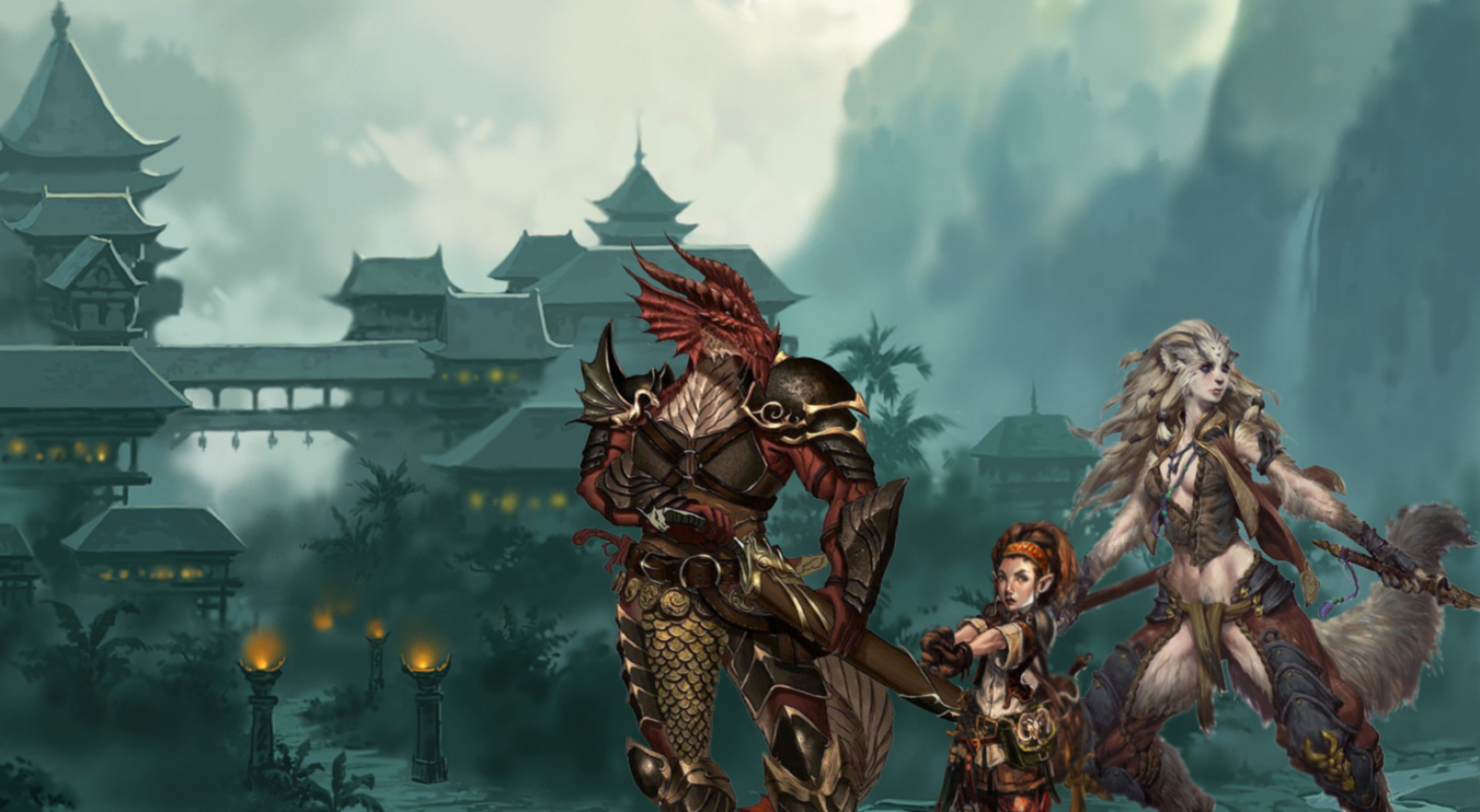 
— Notes of the last attempt of the almost famous adventurer and nature scientist Voldar Winn to find a title for the book he was about to write, before settling down in Xandattaway again and reopening the oddities shop of his father.

Healthy male members of the seeding genotype are able to produce seed, which, when injected into a female, can fertilze her, provided that, at the time of intercourse, she was in a fertile phase to begin with. The process is not guaranteed to work, and seedbirth infertility, which is, by the way, totally unrelated to faebirth infertility, can happen for different reasons. Sometimes partners also have to wait and attempt several times, even if they both wait for the proper time of female fertility,   In order for seedbirth to work, both partners must be of the same race, or belong to subraces of the same race. Crossbreeding with members of different species is not possible, even if they are of a seeding genotype too. Their seed is just too different for this to work. Halfbreeds, as a faeborn bridge between species, create somewhat of an exception in that regard, which will be covered further down under the chapter "Halfbreeds".

Nature vs. Nurture on Ardu

"Well... "   Baroness Amira Kord of Under-Kell pinched the back of her nose and sighed... The black haired, slender woman of about 40 Summers was looking at something which some might call a family tree. She called it a major disaster hit by a catatstrophe already.   "Mr... Fargazer, also known under the name... " another sigh, which almost hid an amused and a little bewildered grunt."... Seawolven? You are accused of imposing your will on the accusant, Ms. Tatiara Guldaenn, whom you met in Brynnen while on a shore leave. According to her testimony, she was on a trip with her father, a well respected carpenter in the greater area of Kell, which is, by the way, the reason why it is up to me to deal with it.   She was there to help deliver some of her fathers goods to a rather rich buyer. In the evening of 20th to 21st of Harvestmoon she met you in the..." the pale, well manicured hand of the Baroness brushed aside the page and her pupils narrowed while she read " 'The Tide Respite', where she , how i see it at least, was out for a little adventure. Something which you gladly provided.   As we can all very clearly see, she is heavy with child, and although she admitted the act was consentual, she definitely didn't intend to become pregnant. As for you being a wolven, and her being a human, the only way she deems this to be possible would be by faebirth... with the necessary will to start it thus coming from you.   Anyway... i see here that you claim to not be a full wolven, but that your father was... lets see... by some odd chance... 7/8 wolven and 1/8 elf , while your mother was half wolven, half human. Which... in case of wolven seedbirth ancestry rather than faebirth, would make you... " the baroness stared on her hand, and tried to figure out the numbers in her head but soon gave up, letting shine through irritatedly, how little she was really interested in the family geneology of wolven sailors. "Yes... lets say.. mainly wolven, a little human and a little elvish..., which would make a human seedbirth at least a possibility. I dare not ask how a sailor gets this document and why his captain seems to deem it necessary to vouch for its correctness and provide the necessary references, but i can only assume this is not the first time that you are in this kind of predicament, am i right?"   The baroness waited till the towering grey furred wolven grunted a stubborn acknowledgement at her implicit question. This was going differently than he was used to. Usually the judges he had to face when something like this... happened... had been men and thus probably a little more understanding. Given the papers, he didn't commit a crime but...   "...Yeah... thought so. I bet in the cities around the Inner sea you are quite the sensation, am i right? Tall, wild and unruly, different, strange even, and adventurous, not in the worst of shapes and always with a story about exotic places on your lips, you must be quite the heartthrob with the women who never saw much more than their parents villages. Like..."   Her head turned towards the tall blond woman in carpenters attire, whose round belly was showing under the brownish apron. As of now she had held her head up high, sure of her case, but when Amira faced her...   "Tatiara... i know you now since you were ... what... seven years old?. Your father provided my household with an armoire which i am still quite proud of. You didn't really ever consider your fathers work honorable though, am i right? I kind of remember you saying... was it last year...? "Just a few months more and i am outta here..." in public and to your fathers face nonetheless, bringing quite shame on him"   The young woman slumped and searched with a questioning look for her parents guidance, which earned her a harried "Don't worry... everything will be alright, yet we can't really do anything..." smile. As her gaze returned to Amira, the baroness gave her a somewhat similar-but-laden-with-disappointment nod.   "So... Mr. Fargazer... According to the laws of Haven, i can't convict you of forcing your will upon Ms. Guldaenn here to sire this child by faebirth, which would qualify you for a nice and painless castration, down there..." She pointed at his crotch ..."and a somewhat more painful up there... " Her hand shifted until her finger pointed upward at his head. " ...delivered by our trusted inquisitors and magisters, and leaving you as a husk without drives, but also without exploitable connection to the Fae, whereas all your acquired riches would go to Tatiara. Which..., i bet..., some of your, and here I bet again... many... former paramours might enjoy to see, but which would rob our society, and especially Under-Kell, of your strong arms and all the other qualities a young and healthy man such as yourself has to offer. Also the baby would have no father.

So... while you might be innocent of the afforementioned crime, by sly "miscommunication" you have managed to "miss" the chance to tell Tatiara, that part of you is still human, probably because she might have reconsidered her, anyways, stupid, reckless and irresponsible, path of action. Because, as one should know, it could have... " and the baroness looked over to Tatiara "... always been a possibility, even if he didn't knew it. THUS..."

The baroness leaned back, crossed her arms and let her gaze wander over the assembled group, shaking her head and smiling disappointedly, as if thinking about an unreasonably bad joke.   "...I hereby declare you both husband and wife. Which, by the power imbued in me by my title, I can do. I just consider this:..." she pointed at Tatiaras belly "...your both application and consent. With all rights and duties this brings about...   This should be punishment enough for both of you. Dismissed."
— Court in the home of Amira Kord, Baroness of Under-Kell

Once a halfbreed grows to adulthood, one of his halfs, the one most useful during growing up, becomes dominant for purposes of procreation via faebirth.   For a halfelf who is living with humans in High Haven, this would be the human part, whereas, for the halfelf who lives on a world tree village in Cun Moragh Norn, the Elven part would take hold as dominant. Once these halfelfs now find a partner, it is those dominant genes which will determine the outcome by conception via faebirth. In their offsprings some remaining traces of the other half might persist though, but only those that have proven useful over the generations.   This is due to the faebirth, unlike seedbirth, being an at least somewhat directed and intentional process, with the intention to prevail being one of the major drivers.   If the halfelfs in our example would ever meet, fall in love and conceive via faebirth together, the result would be a halfelf, because the dominant half of one is human, while the dominant half of the other is elvish. This is not a given. It is perfectly possible, that two halfelfs conceive a human or an elven child together, entirely depending on where the expecting parents grew up. Two halfelves who grew up with the humans and who conceive via faebirth, will have human children, with just a slight little remaining elvishness mixed in.   HOWEVER... This is where it gets complicated...   Halfbreeds also inherit the possibility of conception via seedbirth from their parents (if those had it), allowing them to either sire or conceive via seedbirth with partners of the opposite sex who also share this trait, which are:       Seedbirth however is not a directed process. For seedborn halfbreeds, the result is always a good blend of the traits that made up the involved parents, regardless of which part would be dominant for faebirth. In case of two half elven parents, the result would be another half elf, regardless if both parents were human or elven dominant.   This really kicks in, once the half breeds are NOT of the same kin though, as the result can very well be something which shares the traits of three or more different races, which is impossible via faebirth. The child of a half human Dragonborn, and a halfelf, conceived via human seedbirth, would have mainly human but also dragonborn and elvish traits.   However while faebirth acts as the great instigator, so seedbirth can shuffle the deck, it also works as the great equalizer. For the purpose of faebirth, however complicated the combination of races in a being, it is the upbringing which determines which part prevails and becomes dominant for (faebirth-)procreation purposes. Except minor mutations, all traits which do not prevail, get eradicated. This also includes the capability for seedbirth. The faeborn child of an elven dominant halfelf and another elf will lose the ability for seedbirth, because it is part of what gets thrown out. Neither the elf has it, nor does the halfelf need it, because, if he did, why is he elvish dominant and not human?   The faeborn child of a wolven dominant, half human/quarter elven/quarter wolven (however that came to pass...) with a wolven would ALSO be a wolven, lose the ability for human seedbirth, but, as a wolven, keep the ability for wolven seedbirth. Some miniscule elvish / human features may remain.   Over time this has led to the following result: While there are barely any larger numbers of halfbreeds descending from races who can procreate solely via faebirth, like half elvish / half gnomish halfbreeds, those which are half human or half wolven can come in greater numbers and even groups. These halfbreeds can procreate with each other via seedbirth, which somewhat stabilizes their numbers. This is the reason why halfelves, halfwolven, halforcs and human dragonborn are fairly known and common, whereas few have ever heard of orcgnomes (although they do exist. They call themself Orclings or Skeks, but are Orcggoblins rather than -gnomes)   It is safe to say though that most halfbreeds in the world today descend from humans, mainly because humans cover such a great territory and thus have so many... possibilties. Compared to them, the wolven, who also have the capability for faebirth and seedbirth, remain rather local around the wolven forests, such that half -wolven combinations are more rare anyway. In addition to this wolven are generally not as fertile as humans (see here: Wolven.)   There are even other self conscious, and thus faebirth capable creatures on Ardu, but halbreeds with or between them are almost always unique, if they even exist today.