Ralgthos is a well-built and althetic man, despite his age.

Ralgthos has a thick yet well kept beard which he keeps trimmed everyday. It has a few gray hairs here and there.

Ralgthos is exceptionally strong, capable of lifting greatswords, greataxes, and a variety of heavy equipment. He says it's because he drinks milk everyday.

Underneath his armor, Ralgthos wears a simple cotton tunic and roughspun pants. He also wears a necklace carrying a golden key, signifying his role as Trade Prince. His armor is adorned with several awards, medals of distinction, and bannerments bestowed upon him by thankful nobility.

His heavy plate armor was handcrafted by Ralgthos himself, it is said he and a contingent of his fellow mercenaries climbed high atop the peaks north of Aristolia to mine out the silversteel used to craft the armor. He has spent a considerable amount of time perfecting the armor and keeps it well-maintained. Every morning he inspects the armor for defects and every night he polishes it to perfection.

Ralgthos was born to a well respected married couple in Hero's Hill Village. His home life was idyllic, quiet, and peaceful, almost too much so for the young boy. He would spend his days with the setting sun looking out into the distance of the statue of Hadan the Warrior Goddess across the Oversol Highlands. When his father, the town blacksmith, broke his hand the dutiful young boy took up his father's practice. For much of his life, tempering steel and forging armor was all the child knew.

The young Ralgthos was a big fan of the hero's tales which were common throughout the region, and the boy could often be seen practicing against wooden dummies out in the fields with swords he had made himself. Locally he was known as a renown smith destined for greatness. His family and village saved up enough for him to travel to Marblemarch and pursue his goals of being a hero.   When Ralgthos arrived in the beautiful marbled city of Marblemarch at the age of 16, he applied to become a Merchant Aspirant for the smithery. Earning his money through hard-work and determination, the young man began running the blacksmith shop where he would meet many mercenaries from the local Mercenaries Guild faction, the Ivory Axes.

Determined to work hard and earn his first Helios Piece and officially become a ranking member of the Merchant's Guild, Ralgthos began hired work as a mecenary of the Ivory Axes, traveling the lands of Aristolia and aiding villages against local monstrosities, banditry, and the odd evil mage. He made many new friendships during his time here that would last him a lifetime. He would always be sure to send a decent amount of gold every month to his retired parents, who couldn't be more proud.

Ralgthos has enjoyed an illustrious mercenary career and is a local hero within the northern reaches of Aristolia's vast empire. His feats against enemies both supernatural and corporeal have been talked about to great extent. Ralgthos has been accredited for the following:

Ralgthos is a loyal friend and companion, and above all else compassionate. He makes sure to never kill the criminals that he catches, and does his upmost to preserve life, whether it be criminal or not. He is focused, clear-cut, and direct, and has little time for games.

A lifetime of mercenary work has brought Ralgthos all across the western lands of Aristolia, and on some occasions even abroad. He considers himself to be a good person, but often finds himself conflicted when apprehending bandits, and takes the time to hear their stories. More often than not, he tends to see the good in people, but his strict adherance to the law gives him the resolve he needs to carry out his duties. When he can, he aids those he feels are capable of redemption, often providing them with a small pouch of gold, a short reprimandation, and an encouraging speech.   Ralgthos often feels that he is responsible for determining the line between justice and tyranny, and does his best to remain true to his stoic outlook on things.

Ralgthos is driven by an inner compassion to do good for the people around him. He hopes to one day be amongst the ranks of legendary heroes like Vallar Redheart.

Ralgthos is a weapons and arms enthusiast, and has various smiths, weapons historians, and archaeologists at his disposal. He displays them all throughout his estate under watch and guard. His favorite meal is a medium rare steak with mashed potatoes and green beans, just like his mother makes them.

Ralgthos has the hearty, musky smell of a man who has put in a hard day's work, with light and sensible notes of a practical cologne.

Ralgthos maintains strong connections with the merchants, businesses, and other organizations which populate the regions surrounding his city of Marblemarch. He manages and maintains the roads across much of Ardras and is responsible for directing much of it's military forces under orders from Arushala Ivorcoat.

His mother and father live comfortably in their one story home looking over the idyllic Oversol Highlands. He sends them money every month along with a letter of how he has been doing.

Ralgthos is a well-respected member of the community within the Church of Helios; he goes to the temple every week.

Ralgthos's mercenary work has earned him an incredible amount of riches and fortune, most of which he has budgeted out toward projects to help improve the lives of the residents of Marblemarch. What he doesn't put into public works he donates to the Church of Helios, whose clergy are always happy to see him. Ralgthos keeps a reasonable amount of gold in his own personal coffers for withdrawal should he ever need it. 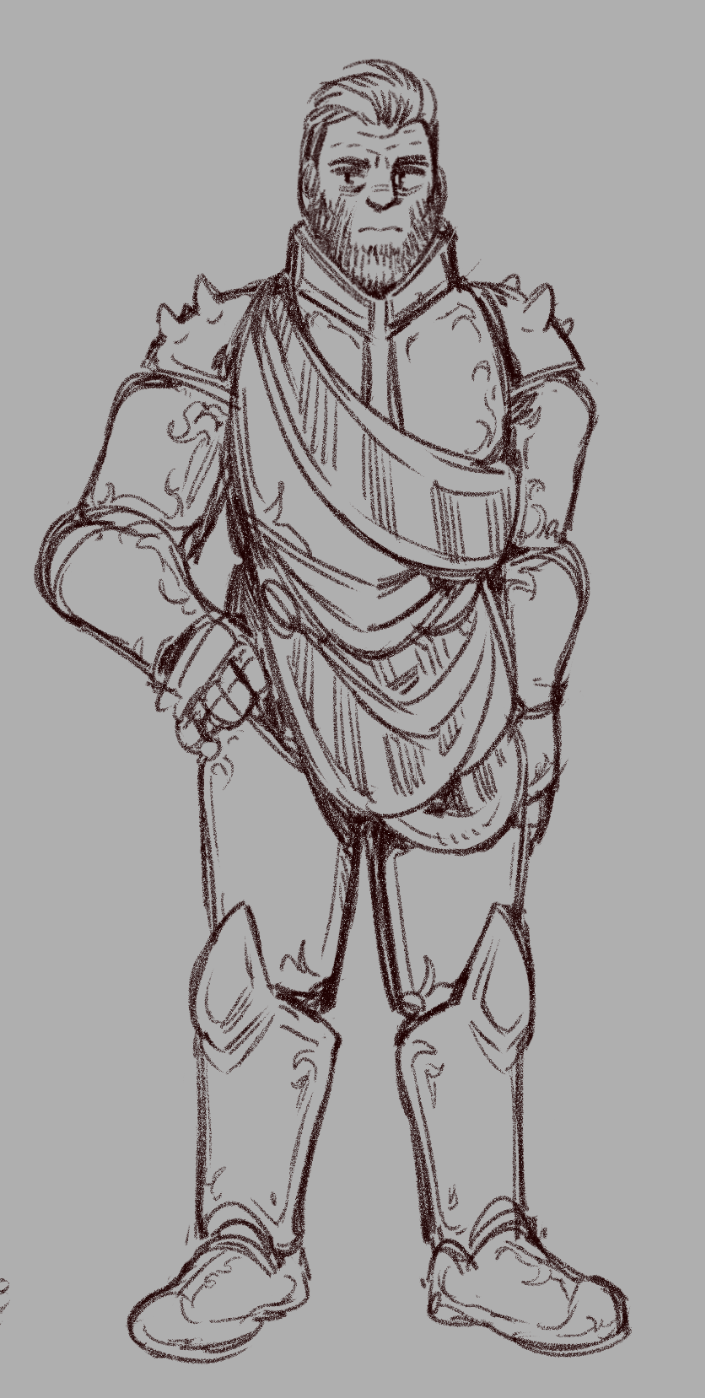