The great city of Aquaris lies at the southernmost tip of the Middle Lands, just below the Saltplains (going by standard southward orientation). It is one of the five large cities often referred to as capitals of the Middle Lands, and only the city of Fulgrath boasts more inhabitants among these five. This is in part due to the ready availability of flowing water and fresh water reserves, which can supply a large population and enables the implementation of a proper sewage system.   Because of the beautiful spire, the tranquil lake, the many streams, and the mountainside as well as the warm climate of the region, Aquaris is one of the most popular spots for tourism in the Middle Lands. Yearly tens of thousands of people visit the city, most of them coming from the five corners of the Middle Lands, in order to enjoy the sights and the famous seafood cuisine of Aquaris, which has a well established fishing industry in its waters. Additionally, large numbers of travelers at least pass through the city regularly since it is the gateway between the Middle Lands and the Saltplains, meaning the Inns and restaurants of Aquaris are usually doing fairly well.   By virtue of its popularity and wealth, the city has grown significantly in the past centuries and has reached one of the highest city populations of its time, only standing behind Fulgrath, Yamaseki, and Borealis.   Historically, the city was constructed around Lake Rahn when the Hall of Lake Rahn, which had been built in 235 AH, was proclaimed the seat of the new city of Aquaris during the Founding of the Five Cities which took place between 251 GE and 312 GE. When this was done, the water mages raised the lake around the hall, creating a great spire of ice, which was engraved with Angelscript, a now forgotten precursor to spell ink, in order to keep it frozen forever, fed by the power of the sum of all persons inside. At the same time vast amounts of wealth and manpower flowed into the surrounding villages, and a great construction project was initiated, building new quarters around the lake, which would expand in time.   When the initial construction caused by the Founding of the Five Cities was completed, much of the present day Rahn Quarter and Blue Quarter were already built up the way they are now. The Master's Borough has also only marginally changed since these days.   The Inner Wall, which was constructed to ward off small raids by the Nordmen in 237 AH, was called the Outer Wall then. The present Outer Wall was erected as a defense against invaders from the Yamato Kingdom before the Battle of Toke was lost.   After the city status was established for Aquaris, the Lord of Water of that time, Jürgen Gothenwald, declared his bannermen, the Riedengrass family, leaders of the city, effectively turning them into official Middlish nobility.   When Ormund Riedengrass, mayor of Aquaris at the time, refused to settle the debt incurred with the Yamato Kingdom, the ancestral Yamato clans of Taira and Tenshin as well as their bannermen banded together to assault the city, storming Mount Toke in order to capture the Toke Shrine to hold for ransom.   The campaign succeeded, and after the involved parties were joined by the Lord of Water, it was decided to severely lessen the debt, but in return replace the ruling family of Aquaris with a branch of the Tenshin, the Yoshitsune Family.   To this day, the Yoshitsune rule Aquaris, and relations with the Yamato Kingdom are strong. However, the Riedengrass still have a lot of clout within the city and often force their way to the negotiation table in political matters.

Historically, the Lord of Water of the five Keepers is the ordained leader of Aquaris ever since it was founded. However, the military and the day to day operations of the city are handled by the Shôto, who is technically chosen by the Lord of Water but has been the head of the Yoshitsune family since 1233 GE, when the Riedengrass family was defeated by the Taira and Tenshin in the Battle of Toke.

There are old but guarded walls around the northern parts of the city, originally built to ward off northern raids, and later attacks by the Yamato Kingdom. Since the erection of the Spire of Rahn, the mages have worked out an emergency plan that is practiced by the population of Aquaris every two years. When this defensive measure is enacted, a great dome of ice is formed around Lake Rahn and the people of the city are evacuated inside, where platform structures are formed out of the ice to hold the numbers as even the gargantuan spire cannot hold the entire population of the city anymore.

There are a number of small- and mid-sized harbors and fisheries scattered along Lake Rahn, Tokerei River, and the Rahnbach, which provide the city with freshwater fish, specifically the large Toke Salmon and the smaller Rahntrout, which are also exported to Lumina Aka and Aerialis as well as their satellite communities.   Middlish River Crab and Aquaris Eel are bred or fished here too and are treated as special local delicacies because they are not well suited for long range transport.   In Aquaris itself, fish, crabs, eels, and mussels are both everyday food and delicacy, and there are many restaurants specializing in these foods, catering to all strata of society and of course tourists, which come to enjoy the warm climate.

Gateway to the Saltplains

Because Aquaris is the southernmost large city of the Middle Lands, it is closest and best positioned to make trade with the Saltplains, which are famous for their different kinds of livestock and delicious vintages.   However, this also puts Aquaris in a position to export to the Saltplains, and they sell not only local goods, but also goods produced throughout the Middle Lands, or at least levy steep transport taxes for use of their waterways. This makes up a good chunk of the city's income and wealth.

Another strong point of Aquaris's economy is its position as a hub for tourism, which brings in large amounts of wealth every year. Especially the mild springs and warm summers attract a lot of travelers from all around the Great Land, who wish to lay eyes on the great Spire of Rahn, which is often referred to as the most beautiful structure of the Middle Lands. In addition, there is Aquaris's famous seafood and the Toke Shrine, which attracts a steady stream of pilgrims and sightseers every year.   Out of the subsequent need, there are many inns scattered throughout the city, providing lodging to visitors.

The alchemist guild has a number of subsidiaries, producing different dyes and inks, which are exported far and wide. They also create the base liquid for spell ink, which is sold to the four other mage academies, and a number of chemicals used by other artisans for their craft. The alchemists also reduce smelting residues the city produces into cobalt, which is a highly priced commodity for not only creating dyes but also for special uses local and abroad.   Most alchemists are located in the historic Zangetsu Ward as it has direct access to Tokerei River and thus the Spire of Rahn.

The stone masons have worked the quarries at Mount Toke since before Aquaris became a city and are located in the Masters' Borough of the city. The clay diggers are from the same families as the stone masons and share a guild with them.   There is little to no stone export form Aquaris, since Arkatrash and Lumina Aka produce their own, and the Aquarian masons can't match the prices of the Yamato Mountain Range when selling to Aerialis.

In the mines of Mount Toke, nickeline ore from ore bodies and scheelite from skarn deposits are mined at great risk to the miners, meaning that much of the mining is often done by undesirables such as criminals.   The nickeline is smelted down to nickle and the residues further reducted to cobalt by the alchemists. The scheelite is smelted into tungsten.   Both metals are highly prized by technocrats and sold to Altonar, Fulgrath, and representatives of Miyako Fluxum but also used for various applications locally.

While there are wide grain fields and some wetland farming around Aquaris, the harvests are too small to satisfy the city's ever-growing requirements, and large quantities of grain and rice are imported from the lands around the Tower of Five, the city of Aerialis, and the Yamato Kingdom.

To the west of Aquaris lie some fertile grasslands where farmers keep livestock and have planted vast orchards that yield apples, pears, plums, and fristok.

Aquaris is built around the northern banks of Lake Rahn with smaller satellite towns and villages around the city proper and to the south. 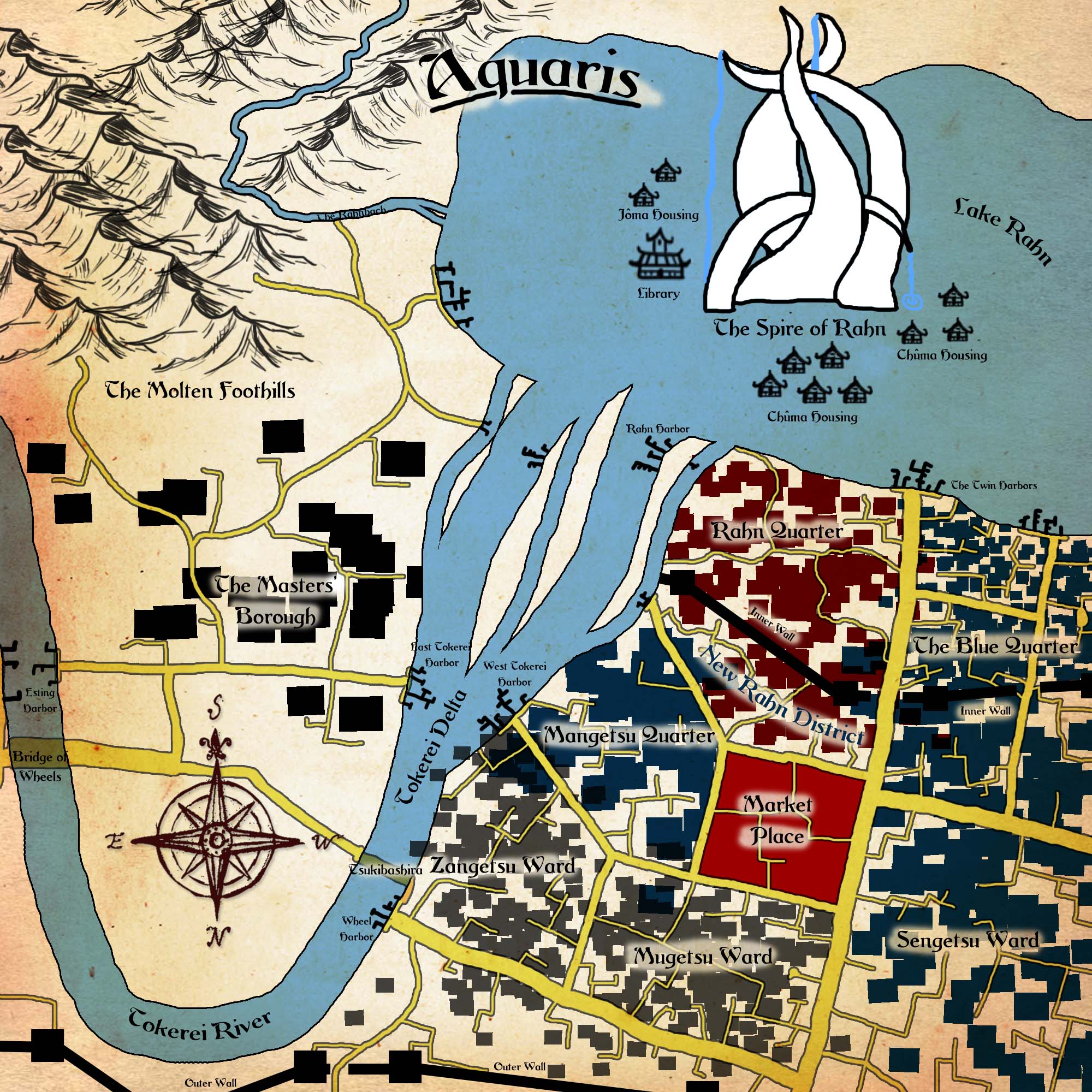 The terrain around the city is fairly flat, becoming more hilly towards the east where Mount Toke lies. Around the city there are no forests except for some groves to the west and at the foot of Mount Toke. The soil is rich and turns into wetlands in some regions around the city, especially south of Lake Rahn. Around the Molten Foothills is soil rich in clay, and some sites towards Mount Toke are suited for quarrying stone. Lake Rahn is fed by the Tokerei River and the Rahnbach, and natural spillways let it overflow into the Giranja's Tribute when there is severe rain or when meltwater comes down from Mount Toke in the spring.

The Travlers Guide to Aqualon by Thadeus Fletcher was a regular column in the HJT Gazette in the 1580s GE. ~ 1508 Words

The Travlers Guide to Aqualon by Thadeus Fletcher was a regular column in the HJT Gazette in the 1580s GE. ~ 2154 Words

Answering: "What’s the biggest city in your world, and what’s its history?"
Visit IsaNite's Competition Page Check all other answers to this prompt Competition Homepage