DeadTreeStudios
The world of Praxia, held numerous races each with their own nation that fought over resources until the introduction of magic and the knowledge on how to harness it spread throughout the land. Some predicted it would just lead to more war but at the time people focused on knowledge the wars went cold and soon after was one in the midst of a magical and technological renaissance.   New Spells, and equally technologies were being made. Mad test, and thrilling discoveries, though rumors of this just being a primer for a bigger conflict that was sure to come. To the average citizen it was glorious, self heating baths, ever growing food, golem protectors, Instant communication and increase health care. this continued for 100 wonderful years, then it all fell apart.   No one knows how it happened whether it was magical experiments gone wrong or demonic influence but the world suffered from what is now called the Fall. It happened in 3 stages, First a ghastly aura spread across the skies that caused all that entered it to become sickened. Forcing the flying races out of the sky. Second beings across the world began to mutate losing mental capabilities and focused on instinct. This affected anyone who was in contact with the aura from before. Third where their were high levels of magic use rifts opened in the aura expelling all manor of demon upon the lands.   All happened in a single day after which the world had to fend off the effects from this disaster for years to come using anything they could to survive. The world was now known as Apraxia. 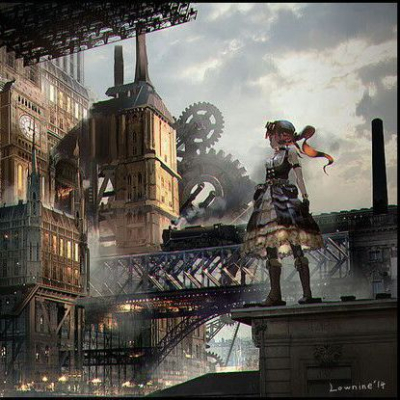 Art by Lownine14
... Races of Apraxia