Commonly regarded as the first of the sentient creations made by Miltiades, Vah'Vahnet is the oldest living being in the universe. Although some doubt the validity of his title as 'First', the vast majority accept him as the oldest.
Vah'Vahnet is Ethiean for 'the First', a name bestowed upon him by his peers long ago, and so widely used that his name has long been forgotten, even by him.
Vahnet has long since lost the ability to see and is mostly deaf, he is barely able to walk and often has to be carried up stairs or when going long distances. Due to this, and the fact that his long life seems no where near finished, he often laments the lack of an end and is often chastised by his friends for welcoming any kind of situation that might bring about his demise.

His pure white fur is so long it drags across the ground as he walks, any pattern he might have had has long since faded away.
Drooping down his back, his ears almost reach the base of his tail. He lost the ability to raise them long ago and often lets them lay against the ground when he's not in motion.
His tail is four feet long and more than doubles his body length, the fur creating a curtain like sheet behind him.

Heavily lined with wrinkles and bags, Vahnet often looks as though he might be about to fall asleep at any point.
The bridge of his nose is bent and crooked, looking as though it was smashed back at some point. Some theorize it was broken in a fight during his youth, others joke he broke it blindly walking into a wall.

Vah'Vahnet is commonly found adorned with hand carved and painted wooden beads and feathers, some are tied into his fur, while some hang from bits of corded twine and tree leather. Long twisted cords are tied around his wrists and neck with an assortment of beads, feathers, small pieces of metal, and even some gems.

Due to old age Vahnet is unable to move to very well, this results in an extremely pronounced gait and slow speeds.

Although he hasn't used his core in quite some time it is commonly believed that it is light based, but his sub-type (or if he even has one) is widely debated. Rumors are that he can utilize both his base and multiple sub-types, and that he uses his core energy to navigate his way around and locate items.

To aid in his movement Vahnet carries a long wooden staff. Cords of wooden beads and feathers hang from the top, and strips of leather form a grip around the center. Upon closer inspection one can see symbols and glyphs carved into the wood.

As the rumors go, Vah'Vahnet was crafted by Miltiades the Maker on the five hundredth and twenty-second day of Ethiea's first year. (1e1.522)

Vahnet has always held the peace and balance of the universe above all, including himself. Going so far as to even deny Miltiades wishes when he felt that it would do more good to go a different path.

With a bad habit of keeping things to himself, and not sharing important information, Vahnet is viewed as a rather manipulative individual at times. Although some argue it's not his fault and that he just tends to forget what has been shared, viewing him as worn out, old, and long past due for retiring.
Despite this he is easily able to lead the Council and maintain their loyalty, his charismatic speeches and flare for dramatic reveals and entrances keeping many on their toes.

Unnerving those around him, Vahnet is known for his habit of acting as though he wasn't blind. Often staring directly into one's eyes, gesturing at a relevant object, or looking as though examining something in depth, before going back to staring blankly off into space. However when in the presence of Tayanan he's been known to do the exact opposite, often wandering off in the wrong direction, speaking to or handing something to the wrong person, or missing the table when setting something down.
He's also well known for his out of place quips, making jokes in otherwise serious situations or turning a joke into a much needed lesson.

Vah'Vahnet was present for the creation of Tayanan and took him under his wing, nurturing him and guiding him through the early years of his life. He taught Tayanan how to control his core and use it to better himself and those around him and, after the first wars broke out on Ethiea, how to use it to defend himself.   At some point they lost contact with each other, and it wasn't until much later that they reunited and rekindled their relationship. Together they spearheaded an alliance between the quilan and ethieans, beginning the long journey towards peace.   With Vah'Vahnet's current state Tayanan has taken it upon him to make sure he is well looked after and taken care of, stopping by as often as their job allows him. 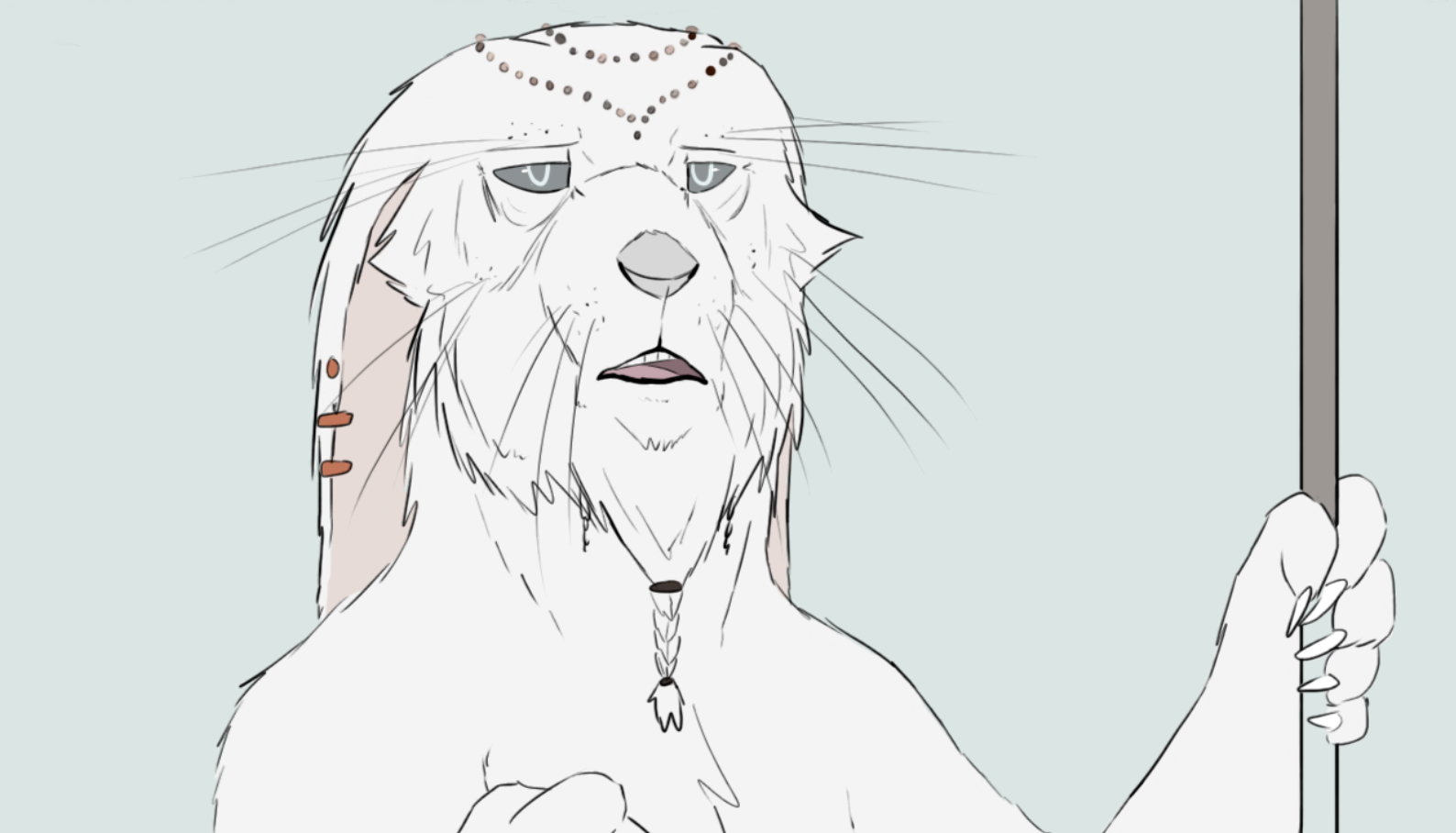 Vah'Vahnet by Kimberlea Heili
Current Location
The Thousand Year Grotto
Species
Quilan (Common)
Ethnicity
Veilan
Honorary & Occupational Titles
Quilan Peacekeeper
Elder of the Council
The First
Currently Held Titles
Circumstances of Birth
The first sentient creature made by Miltiades, some stories say that he was made to teach the Ancients how to create their own creatures.
Birthplace
Forest of Veila
Spouses
Siblings
Children
Current Residence
Veila
Presented Sex
Male
Eyes
Cloudy off white, pale gray sclera
Height
3'7"
Weight
35lbs
Quotes & Catchphrases
"If it's my time..."
Much to the annoyance of Tayanan, Vahnet is commonly heard dismissing potentially harmful or deadly situations with this phrase. Usually accompanied with the refusal to move or do anything to help himself out of harms way, leaving Tayanan or one of the two's Keepers with the duty of picking up the stubborn Peacekeeper and moving him to safety.
Aligned Organization
The Intergalactic Council of Peacekeepers
Other Affiliations
Related Myths
Known Languages
Veilan, Tokish, Ethiean, Fangorian, Glas-ri, Pothiean, Tierish, Okin, Naisu, Common
People