Minotaurs life in an honor based society where strength determines power in both the gladiatorial arenas and in daily life. At home on both land and sea, the Minotaurs of Aloran are ferocious sea raiders who rank among the ablest and most dangerous sailors in the world.

Minotaurs embrace the notion that the weak should perish and that the strong must rule and that they themselves are the strongest and most powerful race on Aloran. They believe their destiny is to rule the world, and that their dominion will be one of conquest and military might. To that end, all Minotaurs are trained in weapons, armor, and tactics from a young age. Their conquest of the Khiran Peninsula at the end of the Silent Age only further cemented their beliefs.   The Minotaurs’ arrogance stems from a combination of strength, cunning and intellect- three virtues they hold dear, and which they believe that this combination of traits is what sets them apart from their rivals.

Minotaur society is built on the principle that might makes right, and that considerations of justice are unnecessary. All posts within Minotaur governments, including the ruler’s, are won by the strongest and cleverest Minotaurs, as proved by combat in the Tribune.   The Tribune is the only means by which a Minotaur can rise in society. It is a grand seasonal display of single combat in which Minotaurs battle each other for supremacy. Minotaur youths must prove themselves in the Tribune to earn their passage to adulthood.   Participation in the Tribune is yet another reason why Minotaurs look down in other folk. To the Minotaurs, death and glory in battle are a natural process. Combat is the key to ensuring that the strong survive, and that the weak are set aside before they can undermine their superiors’ grand schemes of conquest.

For all their cruelty, Minotaurs are bound by a powerful sense of honor. Each victory brings greater honor to both individual Minotaurs and their families. Defeat invokes a stain that only death can fully wash away.   Honor demands that Minotaurs keep their word once it is offered, and each Minotaur remains faithful to friends and clan above all else. Minotaurs rarely befriend folk of other races, as they all too often encounter them only in battle. If a Minotaur does strike up a friendship, it is typically with other creatures that display the minotaurs’ virtues and love of battle. To such friends, a Minotaur becomes an ally whose support will never waver.

Until the end of the Silent Age, the majority of Minotaurs primarily resided on the island of Minoraun. Having been surrounded on all sides by water for the majority of their history, Minotaurs focused their tenacity, strength and cunning to become some of the most skilled and ferocious mariners in the world. They range across the water in their ships, raiding and pillaging as they wish. Minotaurs sometimes engage in trade, but they much rather prefer to take what they want by force. After all, as the strongest of all folk, they deserve the treasures and goods that lesser creatures have gathered. 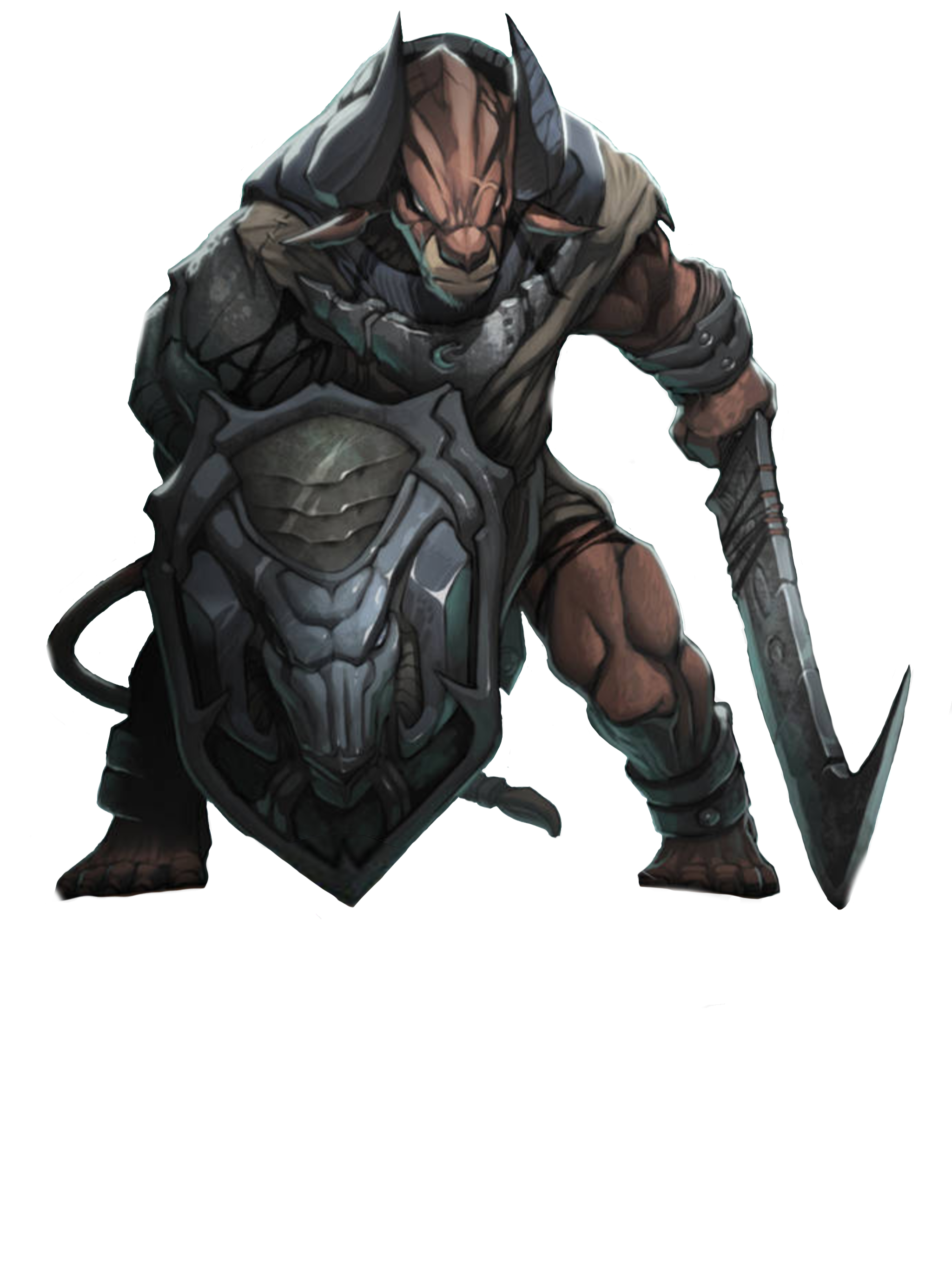 by Mauricio Herrera
Warrior’s Virtue From a young age, you focused on one of the three virtues of strength, cunning, or intellect. Your choice of Strength. Intelligence, or Wisdom score increases by one.   Age Minotaur reach maturity around age 17 and can live up to 140 years   Alignment Minotaurs believe in a strict code of honor and thus tend towards lawful. They are loyal to the death and make implacable enemies.   Size Typically stand well over 6 ft tall and weigh an average of 300 lbs.   Horns You are never unarmed. You are proficient with your horns, which are a melee weapon that deals 1d10 piercing damage. Your horns grant advantage on all checks made to shove a creature, but not to avoid being shoved yourself.   Goring Rush When you use the dash action during your turn, you can make a melee attack with your horns does a bonus action.   Hammering Horns When you use the attack action during your turn to make a melee attack you can attempt to shove a creature with your horns as a bonus action. You cannot use this shove attempt to knock a creature prone   Sea Born You gain proficiency with navigator’s tools and vehicles (Water).   Labyrinthine Recall You can perfectly recall any path you have traveled.

Languages. You can speak, read, and write Common.

Tweet
Credit for the art goes to their respective artists. Most of the artwork was found on Pinterest and google images. The maps of Aloran were created by me. Many of the races and items were created by other people. Credit goes to their original creators. The DM reserves the right to alter or nerf any and all homebrew content as they see fit.