The Litsin Sidamelo only grows within the Galina mountainrage, here it grows in caves with very little light, and amongst the white rocks of the mountains to keep it safe from the few animals who survives in these caves. While it is very beautiful to look at, it is very dangerous unless treated. They are about ten centimeters high and only five centimeters in diameter, though that is to deceive you, since the mushroom when it sends its spore out, it spreads its head so fast the that the spores is given a boost and spreads from the mushroom's laces. Once the Litsin Sidamelo is done sending out its spores it takes its previous form. The spreading of spores only happens during summer, where the air inside the cave is more dry than other, which makes the spreading easier. The duration of the spreading lasts only a couple of hours.

After the process of boiling the Litsin Sidamelo are either sent to kitchens to made into food, but those Litsin Sidamelos that are open is being sent to be pressed. After a year of dry pressing these Litsin Sidamelos they are used to make fabrics and other ornametations.
The Grefeims especially enjoy doilies made of these. Do not ask me why, I find these doilies wasteful. 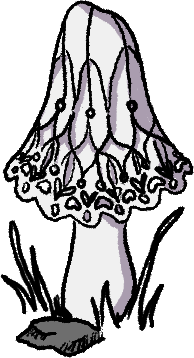 I love all the different uses for the mushroom - I really like the fact that people can use it for fabric after a year of pressing! And that boiling removes enough of the poison so they are edible.