Hard to believe that this was once an unbroken stretch of earth and stone, stretching in all directions seemingly eternal. Now, it is a mere ruin. A mosaic of shards on which we make due.
— Keith Tennison, Arcadian Skyrider 1755-1791


Once, in ages gone so long that they have transcended history and become myth, Aeteria was a planet like any other. Then came the Shattering, a disaster so titanic that it tore the world apart. In its wake, it left a collection of ruins, a pile of shards caught within a maelstrom of nature gone mad. This is the state the world has found itself in ever since. Just how much time has passed since the calamity struck is unknown.

From the pages of "Navigating the Sky Ocean for the less Gifted" by Antoine Darleon   "While it is quite easy to see the Sky Ocean as just a gathering of shards and broken lands, one should quickly learn to disregard that quite frankly banal notion. Once actually explored with an open mind, the young explorer will find themselves discovering wonders and intricacies beyond count. A thing of beauty." 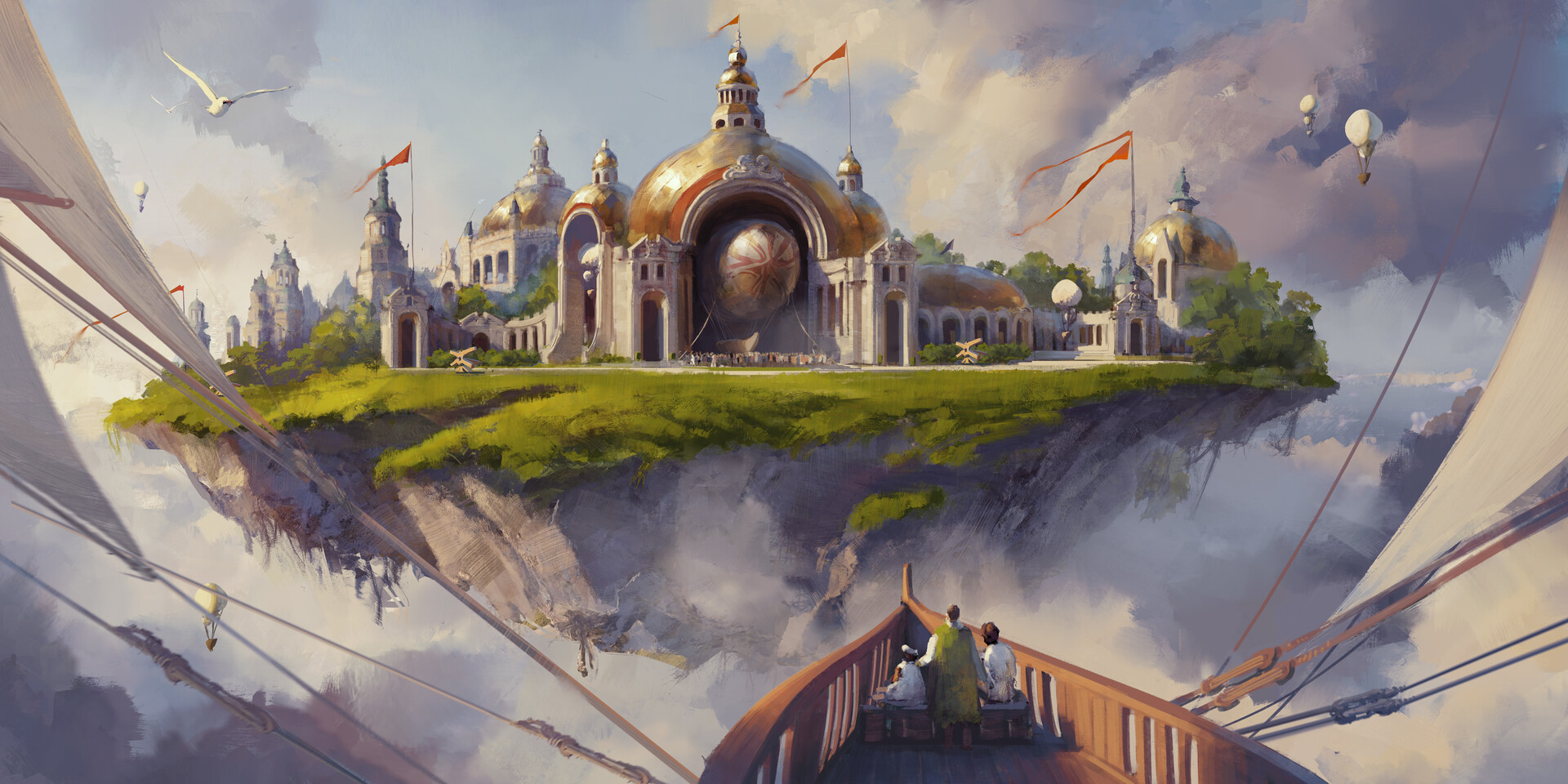 by Simon Urban
What remains of Aeteria is an uncountable number of islands floating in the sky. Clumps of earth and rock, ranging in size from tiny pallets to country-sized behemoths, all kept afloat by the planet's magnetic field. However, things are never truly stable in what the people know as the Cloud Ocean.   The islands move in accordance with the changes occurring within the magnetic sphere, rising and falling and drifting about in an eternal dance. Result being that there is no true map of the world, as the land will shift and move, creating new formations over time while destroying the old ones. To bring some order into this chaos, Humanity has divided the world into spheres or layers:

Beyond 22,700 meters above the Median, death reigns supreme. Air is nearly nonexistent and ice reigns eternal in this realm. Here, the atmosphere of Aeteria goes over into the vacuum of space, the eerie silence accentuated by ice-covered islands gliding along aimlessly.
The Ice Belt

Less hostile than the Void, yet of no less danger, is the Ice Belt. A zone starting approximately 17,900 meters above the Median, it is one of the largest of all layers. Here, the air cools to a degree that ice and snow become the predominant forces. It is divided into several sub-layers that start with more mild zones and eventually reach artic levels of hostility near the upper echelons. Life here is hard but possible.
The Storm Belt

A small zone caught between the more temperate and cold layers. Here, rising warm air from the inner levels and cold air from the Ice Belt mix and produce an environment almost always caught in some form of storm. Much of the rain that waters the Temperate Zone is produced here. Another Storm Belt, which is dominated by dry lightning storms and dust waves, lies between the Tropical and Dry Belts.

Dwarfing all other layers, the Temperate Zone stretches from almost 17,000 meters below the Median to nearly 16,000 meters above it. While the name suggests a particularly mild climate, it actually encompasses a wide variety of environments ranging from drier grasslands to steppe and everything in between. Most of the large collections of islands can be found here, housing the vast majority of the human population.

We cannot say for certain just how many remnants there are. The number is changing every minute we are talking here. It is impossible to count them.
— Prof. Tai Jue, University of Luoyang

In the same way that the upper layers grow increasingly colder due to their distance from the core, the lower layers see rising temperatures the further down you go. Between 17,000 and 20,900 meters below the Median, hot and moist air dominates and creates lush green islands filled with life. It is not as friendly as the layers further above, providing a series of challenges to the people that have made their home here and is less populated.
The Dry Belt

Going even further down, over 22,000 meters below the Median, one will find a world where water becomes increasingly rare. By 7,500 meters below Median, it simply starts to evaporate and rises back up in vast clouds of steam. Life becomes increasingly hard and finally impossible once one crosses that boundary, for the air grows too hot to breathe and dust storms ravage scorched rocks whose surfaces have almost turned to glass. 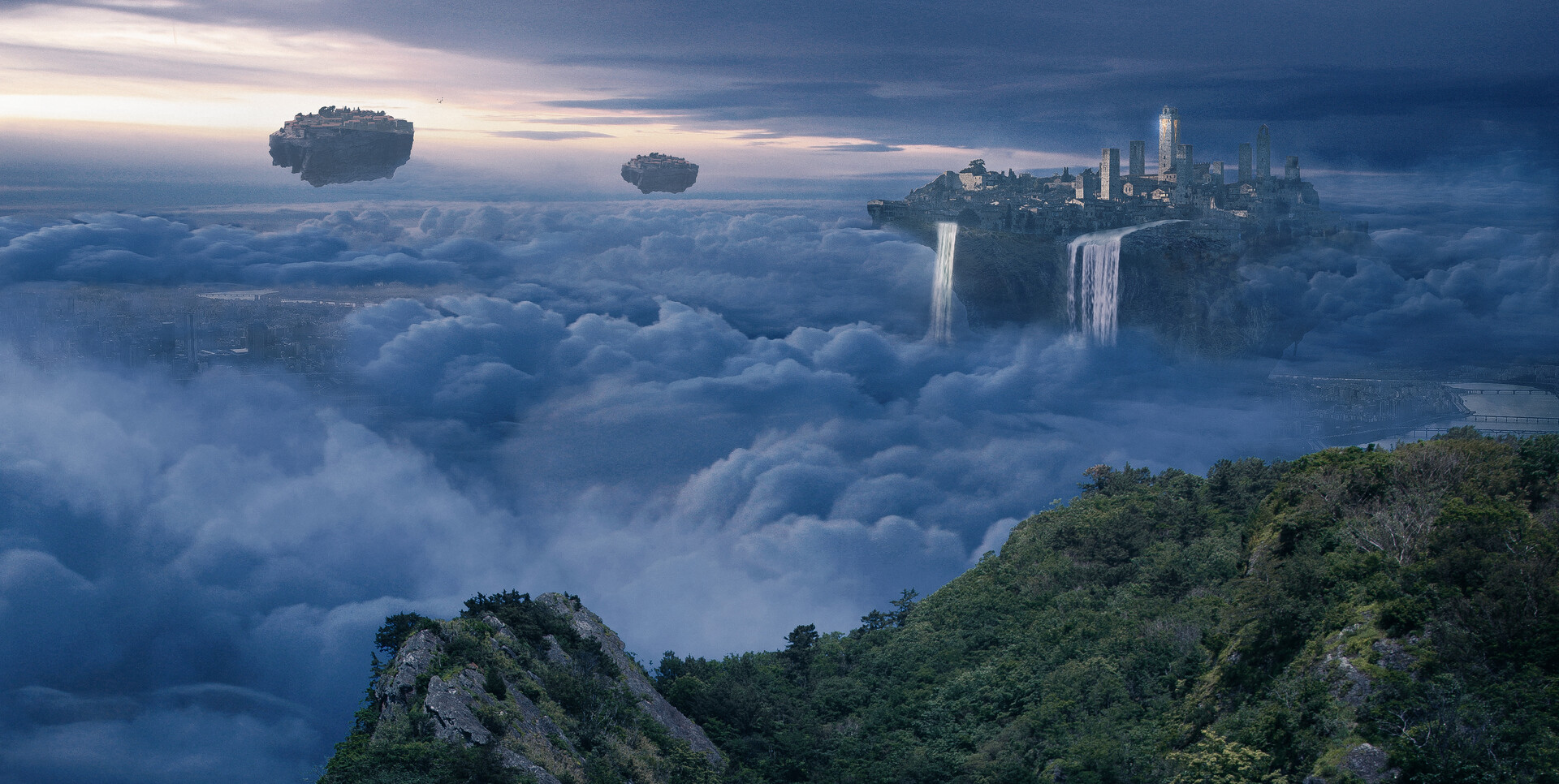 by MyZz
Hell has two faces on Aeteria. One is the airless, dark void stretching far above. The other is a chaotic mess of hellish forces, stemming directly from within the shattered planet. How far this layer reaches is unknown, for only the first four kilometres are visible. A veil of gasses, known as the Hellshroud, blocks the view at what may lay below.   It is a thick soup of black mixed with oily greens and yellows, storms of red lightning cascading along its length and breadth. A continuous low thunder permanently reverberates in the air. The only sign of the activity below are massive eruptions of molten rock that break the shroud in towering columns many thousand meters high. It is a world utterly hostile to any form of life.

Magnetism and height are not the only forces that affect life in Aeteria. Wind can be funnelled into powerful currents that act as fast roads for the Airships of Humanity. Tiny changes in the magnetic field can cause chain reactions and launch storms of rock across the world. Water, for the many sky islands still contain rivers, lakes and even small oceans, rushes down into endless depths in falls of spectacular beauty, only to rush up in clouds of steam at another place.   Last but certainly not least are the islands themselves. Caught in a perpetual dance they may coalesce into large groups or travel as lone wanderers across the world. Sometimes they crash into each other or even fall in their entirety, causing a disaster known as a Skyfall. Yet mankind has survived in this strange world and inhabits many of its islands in huts, villages, cities and even entire nations.


Out here, the wind is our mother and magnetism our father. And the earth? It is the shelter we seek whenever the world's wrath seems bent to destroy us.
— Dimitry Donatov, Rus Skyrider 1701-1762 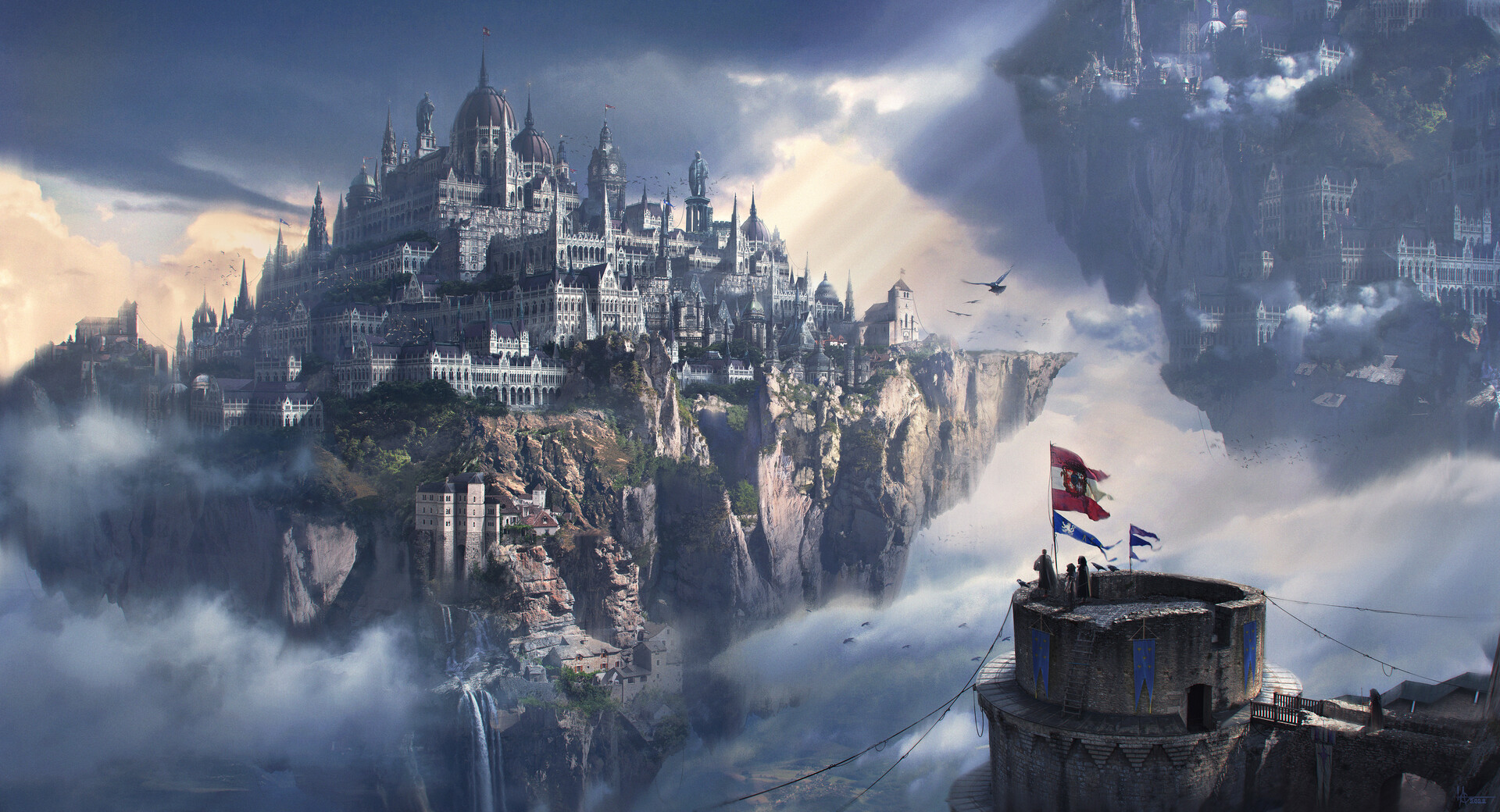 by Andrey Gevechanov
Remnants
Used as a general term for any piece of land still hanging in the sky, the name encompasses a wide range of forms and sizes:   From tiny particles that one can barely observe to small rocks about the size of a head, these remnants of the old world can be found everywhere and most often in large swarms. While mostly only a nuisance, they can become a danger to wealth and life of the people, either in storms or when drifting into areas of high traffic.   A splinter is usually defined as a piece of rock that can carry a single human or more. Not as omnipresent as Dust, they can be found in large numbers, particularly around larger islands. In some cases, they are large enough to hold small homes or other structures and are often used as traffic signs or light posts for air traffic.

by Tony Shen
Once a remnant piece is large enough to hold multiple houses, it qualifies as an island. The majority of inhabited remnants belong to this category. From villages to cities to farms, factories and fortresses, they form the backbone of human civilisation.   The ruins of the Old World's continents, these formations are the largest in existence. While they don't reach the size of their predecessors, they can measure over 1,000 kilometres in length and width and be many hundred meters tall. It is here that most nations have their cores and some plates even contain multiple states. 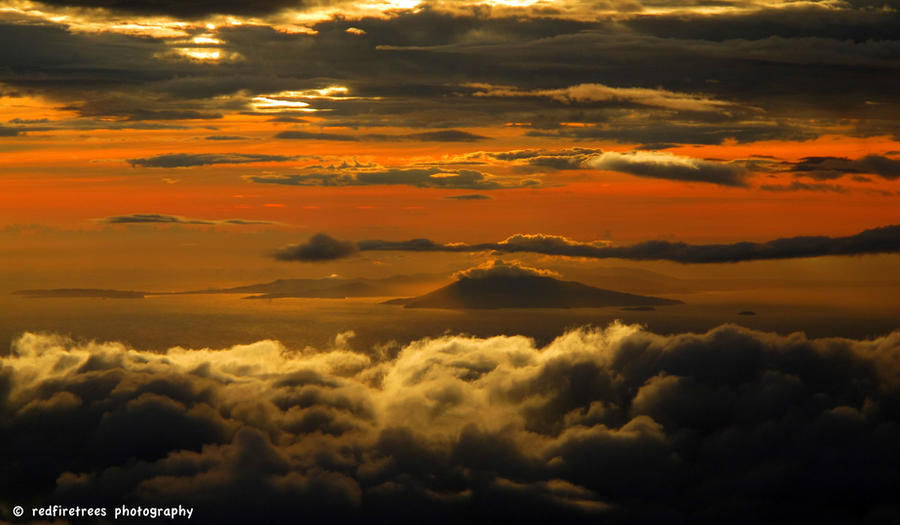 by redfiretrees
Swarm Formations are gatherings of islands. Caught in place due to abnormalities within the magnetic field, they can grow over time and even surpass plates in terms of mass. By far the largest of these are the Columbian Archipelago, Ruthenian Expanse and Xi'An Plateau, each of which is larger than any single plate in existence. 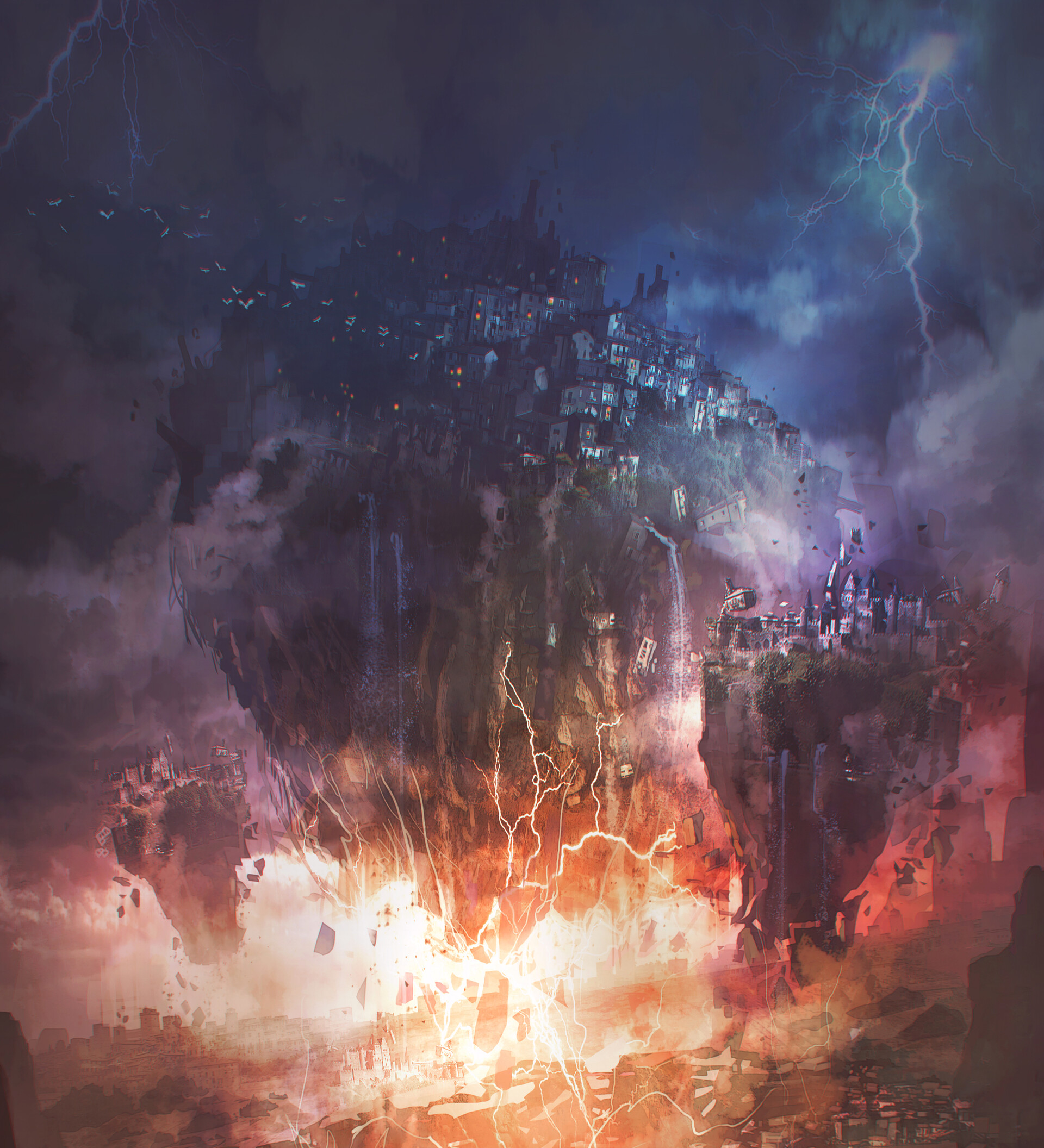 This is really cool! Your quotes are really evocative and sell the location, and it's great how you break it all down. However, this article is so dense with text that it becomes overwhelming. The part with the temperate, tropical and dry belt is especially hard to read. If you go back and make a few changes to the formatting to give readers room to rest their eye, you'd see a lot more people loving this article, I'm sure of it.   I don't normally give unsolicited feedback, but you've got such a great article here and you've clearly put in so much work. I really do think that just a few small changes, like changing the three columns to two sets of two (maybe moving an image into the fourth column that would otherwise be blank), upgrading the belt and zone titles to true titles rather than just bolded, and maybe moving the excerpt by Antoine Darleon to be a quote under Everchanging World?

First off, thank you very much for the compliment and criticism! Both are always appreciated.   I did change a bit of stuff around. Does it look better or worse?

I think it's a great improvement! Good work! You should make sure to go show it off in the showcase, if you haven't already