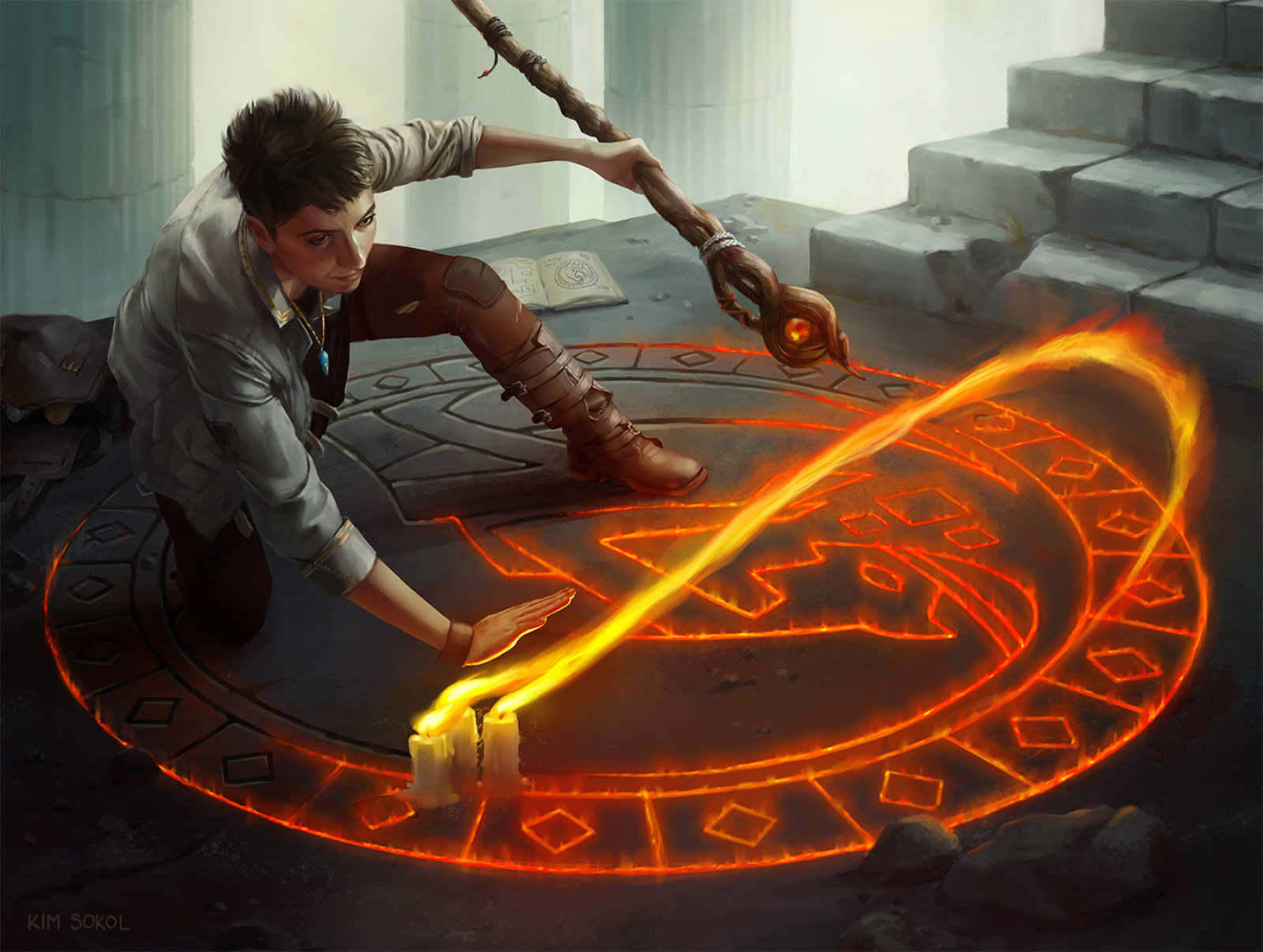 A shifter is someone whose arcane abilities tend towards manipulating dimensional energies and summoning creatures from beyond the dimensional event horizon.

There are two requirements to be considered a Shifter.   First, one must be born with the ability to access and control dimensional energies.
Second, one must have spent a significant amount of time practicing to develop these abilities.

A Guilded shifter will have been an apprentice for years under the tutelege of more senior experienced shifters. Guilded shifters are specialized as a Summoner, Braucher or Diabolist and have access to their societies' libraries and job boards. Guilded shifters will also be subject to the rules and regulations of their respective societies as well. Advanced spells and rituals are often withheld from shifters and offered as payment for loyalty and for services rendered to the society.   Rogue shifters will typically be more free to pursue whichever aspect of shifting appeals to them from one day to the next. They do not usually have access to the libraries, guidance or support provided by guild societies so obtaining advanced spells and rituals is usually the result of diligent self discovery, trial and error, or theft. On the other hand, they do not suffer the restrictions and demands that such societies place upon their members.

There are basically two classes of shifters. Guilded and Rogue.


Guilded Shifters belong to a society (usually with a label like Mystical, Hermetic or Arcane). They are usually disciplined and answer to their society hierarchy. Such societies may be altruistic, philanthropic or downright diabolical and they seldom suffer dissenters in their midst.

Rogue is a term given to non-guilded shifters by the Guilded shifters. Some others might call them rogues if they were aware of the difference, but most people just call them shifters. Barring a few exceptions, Rogue shifters do not possess the passed-down knowledge, discipline and training of a guilded shifter. On the other hand, Rogue shifters are also not limited by the restrictions placed upon them by a society nor the internal politics found within one either. This freedom is the reason many Shifters remain unguilded.

Guilded Shifters are often contracted out by governments and powerful people, or otherwise act in some sort of official capacity. As such, they are usually treated with respect if not fear and awe.   Rogue/Unguilded shifters are nearly universally feared. The powers at their disposal are the cause of great historical and deeply held societal terror and without the assurances and security provided by a guild endorsement, they are considered just as terrible.

Shifter is one of the only arcane or psionic using professions that does not heavily favor Humans. While most shifters are human, that is only because human is the most populous single race on the planet. But on a per capita basis, Shifters are equally represented in nearly every race.

Arcane aptitude has existed in humanity as long as humanity has walked the planet. In fact, most races in the cosmos have some degree of arcane ability. But in a low magic world like pre-rifts Earth, only those people with the most exceptional arcane abilities were able to manifest any powers, and even then their powers were weak and took time to gather the energies required to function. To counter this, humans developed rituals, sigils, and runes to help them harness and hold the power necessary to use arcane abilities. Eventually, those humans formed secret societies who shared their knowledge, passed down their traditions and, most importantly, policed themselves. The Freemasons is perhaps one of the most well known in the English speaking world.   When the rifts came to Earth with the Great Cataclysm, all this changed. No longer were arcane abilities limited to only the most exceptional practitioners who had discipline and the oversight of a society. Now even the undisciplined, untrained and unaccountable were able to access arcane powers and dimensional energies. They wasted no time exercising these new abilities.   This proliferation of ungoverned dimensional access ended up making the bad situation of post-cataclysm Earth even worse, releasing demons and other dangerous denizens of extradimensional space onto the planet.   Almost four hundred years later, many of these arcane societies still exist, including the Freemasons, and are still struggling to reign in all the practitioners of the arcane arts. They are not nearly as secretive as they once were and practitioners of their arcane arts are now more commonly known as Shifters and Sorcerers.

One of the most important items in any Shifter's posession is her grimoire, typically including instructions on how to create magical objects like talismans and amulets, how to perform magical spells, charms and divination, and how to summon or invoke supernatural entities such as angels, spirits, deities and demons.   After the grimoire come all the talismans, amulets and other artifacts they use to enhance their arcane abilities.   Finally, many shifters, especially those from diabolic societies, will be accompanied by a powerful summoned creature. In public, these creatures might be called familiars, but they are not familiars in the least. They are creatures whose wills have been bent to obey the commands of their masters.

A shifter's workplace is easily identified by a large circle in the floor. Since nearly all arcane rituals and spells require a circle   The larger the circle, the faster the ambient energies will be collected. Often pyramids are also used in conjunction with or in place of circles.

A shifter who concentrates most on summoning is known as a summoner.   Not all shifters are summoners.   Many shifters make their living creating enchanted items such as amulets, talismans, and even placing wards, charms and enchantments on weapons, armor and places. Such shifters are known as Brauchers (pronounced Brow'-ker).   Some shifters combine summoning and enchanting by enchanting items with the spirit of a summoned creature. Such shifters are considered anathema by other shifters, practitioners of the arcane arts, and most people in general; but in certain circles they are held in the highest esteem. These are called Diabolists.   Besides these services, Shifters are most well known for their ability to study and control rifts. When a new rift forms, shifters will race to study it and sometimes to close it if it is a threat.

The biggest hazard associated with shifters is the sheer magnitude of the energy at their disposal. Unlike other arcane users, shifters don't harness their own energy, nor do they tap into and draw ambient energy through themselves as a Ley Line Walker would. Instead, shifters attempt to control and direct the flows of raw dimensional energy itself. They use their ritual shapes and runes to create dams, reservoirs, spillways, gutters and sluices to build up and direct the flows to achieve the results they want. With experience and training, they have learned how to build up safety features, reinforce their barriers and bulwarks and even shed excess energy. But sometimes, no matter how well built their arcane bulworks might be, sometimes the flow might prove greater and more rapid than their efforts can handle, and disaster is the inevitible result.   Like the failure of a dam and spillway, whatever is downstream when it is overwhelmed will suffer the consequences and forces of the released energy.

Summoners use the Shifter character occupation set forth on page 31 of Savage Foes of North America (Pinnacle Entertainment Group).
Brauchers must use the Technowizard occupation as a template instead of the shifter template. But instead of gadgets and gizmos, their creations are single-use drawings or multiple-use talismans, amulets, etc. The flavor of their arcane ability is one of ritual diagrams rather than physical invention. Shifters who use the Braucher (technowizard) template in this way are not restricted to the spell list provided for Shifters found in Savage Foes of North America; but ,like Technowizards, can implement any power whether they know it or not, so long as they have been able to record the details of that power into their grimoire. A shifter who wishes to have the abilities of a summoner and a Braucher must take both arcane backgrounds. Brauchers who do not also have the Summoner Arcane Background still enjoy all the special abilities from the Shifter Occupation with the exception of Bind the Summoned. Conversely, Brauchers do not enjoy any special abilities of the Technowizard having to do with technology. This means that they do not possess Machine Maestro or Gearhead Geek nor do they automatically possess knowledge in Electronics, Repair or Science as a technowizard would. Brauchers can not convert technological gear to work with arcane power, but they can upgrade technological gear by placing runes and sigils on it. Only arcane users would be able to activate such upgrades. Non arcane users would still be able to operate the gear as usual, as if the Braucher upgrades were not present.   Diabolists must possess both the Technowizard Template for their character (like the Braucher) and the magic arcane background of the summoner. The contrast between a Braucher and a Diabolist is that since Diaboilists use the souls of summoned creatures to power their devices, their rituals need to be bigger, take longer, have a higher chance of failure, and suffer more severe risks of failure. The trade-off is that the creations of a Diabolist do not require the expenditure of the wielder's power to activate. Since the captured entity is providing the power, the user does not need to have any arcane ability. In other words anyone can use gear created by a diabolist so long as they know the command words for the power activation. (telepaths may utter command words to the captured entity via telepathy, thus avoiding the necessity of speaking them aloud) The power of gear created by a Diabolist depends mostly on the power of the creature who's spirit is used to power it. Less spiritually powerful creatures provide less power, and gear enhanced by such souls may only be used a limited number of times in succession before it needs time to rest and rechage. More powerful souls can provide a greater number of charges, but are more difficult to summon, capture and dominate.

Flavor Note: Feel free to provide anthropomorphization to items that have been enhanced by a diabolist. Give them such things as eyes, perhaps even mouths and voices, maybe grasping hands or legs for moving around. You could even give them a head of hair, boney spikes, or horrifyingly dripping blood that never stops. All manner of monsterification can be imposed upon a diabolist's creations should the GM choose to do so and the monsterification should be in keeping with the nature of the creature whose soul was captured.
A Rogue Shifter may choose to be as much of a summoner, a braucher and a diabolist as he or she wishes, but must take the Weird Science (TW) arcane background in order to use Braucher spells and to create Broucher and Diabolist items.   One final note: An existing Summoner or Rogue Shifter may select the Braucher or Diabolist arcane background (weird Science: Arcane) at any time after character creation. Likewise, a Braucher may select the arcane background(magic) of the summoner at any time after creation as well, for the same reasons. This is because they all share the same natural abilities. A Summoner's, a Braucher's and a Diabolist's abilities are learned so long as one already has the Shifter's natural born arcane aptitude.