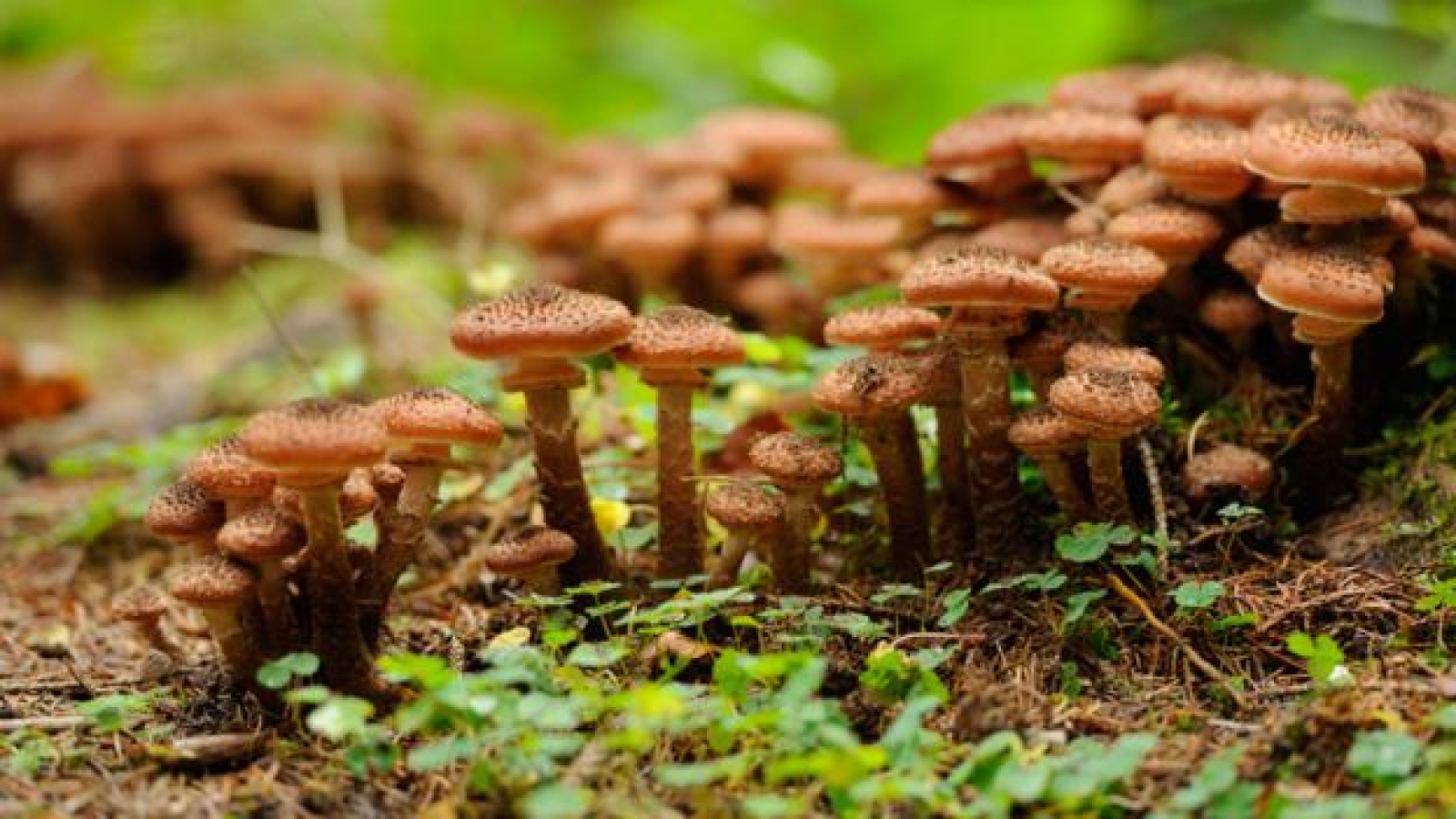 Honey Fungus Armillaria Solidipes (a.k.a. The Hope, Death's Embrace, The Everliving, She who Consumes All, The Mistress of Rebirth, The Final Embrace)

Once a mere fungus, it has been the largest organism on the planet for a thousand years or more. Now it spans the entire continent and has achieved awareness with the coming of the rifts.
Armillaria has and will communicate with champions of renewal who have become its prophets
Symbolizing rebirth from death, new growth from destruction, hope in the face of despair, and life everlasting; it is no surprise a religion has formed to worship it in the aftermath of the great cataclysm.

Armillaria has no intelligible plans. It lives for one goal, to absorb what was and convert it into what can be. It is aware of the destruction of the great cataclysm and sees this as the opportunity to create something most amazing. It will seek out those who feel the same and also those who it senses need correction to feel the same.

Armillaria is without a doubt, the largest organism on the planet. It is hundreds of thousands of tons of interwoven fungus spanning from ocean to ocean and bounded only by the frozen north and the desert south where it can not survive. Armillaria also exists across Europe, Asia, Africa, India and Australia, but those parts have not yet joined, nor can they join with the part in North America. They are currently developing independantly, but as it gains intelligence and worshipers, it is only a matter of time until it finds a way of uniting its dissociated parts.

Before the Great Cataclysm, Honey fungus feasted only on trees. And while it still maintains Honey Fungus mushrooms, it has learned to reproduce the physiology of other forms of fungus so as to survive in more specialized environs and on more diverse sustenance. It can now act to decompose nearly any lifeform.
The primary mycelial cords a.k.a. rhizomorphs are thick tuberous filiments that look like leather tree roots. The mycelia themselves are thin white fibers and the mushrooms are typically honey colored button shaped caps on short stems. Other mushroom and mycelia physiology have been observed to be connected to the same rizomorphs, leading us to believe Armillaria is adapting itself or assimilating other fungus into itself.

When Armillaria creates an Avatar, it usually does so by forming rizomorphs into a tightly twisted mass in the form of the species to which it is attempting to communicate. It will use mushrooms and white myceila fibers to ornament the avatar with hair and other details to more closely resemble the target species. Owing to its peculiar ability to reconnect separated peices of itself, its avatars can actually become independent entities and walk and ride like any other being. Then the avatars can quickly and silently disappear into the ground, reconnecting to the main body at any time. It is possible to capture an avatar once it has been isolated from the main body.

If it is a mushroom, chances are it is part of Armillaria.

Armillaria has not learned how to form speech sounds. It can read thoughts and will be able to project thoughts via touch to any willing and receptive target.

Near instant communication across the continent. Ability to read surface thoughts and can communicate via touch with willing recipients
Some worshipers volunteer to become conduits, communication nodes on the mycelium network, allowing the fungus to take over their bodies. By doing this, these volunteers become user interfaces for other people to communicate via the mycelium network. In the same way that a fungus provides nutrients and water to plant roots, so does Armillaria prvide nutrients and water to keep the vital organs alive in these volunteers. These volunteers can not move, however, and eventually become nearly indistinguishable from the fungoid mass they have merged with.
The most faithful worshipers seek out union with Armillaria before their death so they can sacrifice their personal life essences, thereby becoming a part of the whole directly. These donations of life are the largest factor in the ever increasing sapience of Armillaria.

Before the Great Cataclysm, Armillaria was the world's largest organism. A single fungus that spanned from Oregon and Washington to Montana and Wyoming. When the the Yellowstone Supervolcano blew, it scattered mycelia and spores across north america and the world. Due to its nature of forming a single organism whenever it comes in contact with detached bits of itself, it slowly reconnected and now spans the entire continent. Due to its large size and neural complexity, and perhaps aided by the infusion of the eruption of ley line energy, the fungus reached awareness.
Early scientists recognized it as armillaria solidipes, also known as Honey Fungus. It became known solely as "the" Armillaria and as it grew in awareness and consciousness, Armillaria was the name it took for itself. That the people of Rifts Earth associate the name Armillaria as feminine has no bearing on the actual gender of the fungus, which is asexual. So, just like the God of Abraham is called a "He," this god is a "She" whether it is appropriate or not.

After choosing the name Armillaria, peoples began associating that name as female and now when it chooses to manifest an avatar, it typically does so in the female form of the species to which it appears.
There are two times when it is especially known to manifest. When worshipers hold their Autumn Equinox festival of death, Armillaria will typically take the form of a female with a large phallus that is actually a mushroom. (some worshipers are known to... better left unsaid) During the Spring Equinox, it takes the form of a pregnant woman who symbolizes the rebirth of new life.

Despair is anathema to Armillaria.
Divine Classification
Demigod
Religions
Realm
North America
Church/Cult
The Circle of Life
Children
Gender
Asexual, often referred to as She because Armillaria is a feminine sounding name in the surviving languages of Rifts North America
Aligned Organization
The Circle of Life
Known Languages
The mycelia of Armillaria can communicate almost instantly across the continent. Those who have been blessed by Armillaria can take part in this correspondence.

The Circle of Life

Those who worship Armillaria, the continent-spanning fungus