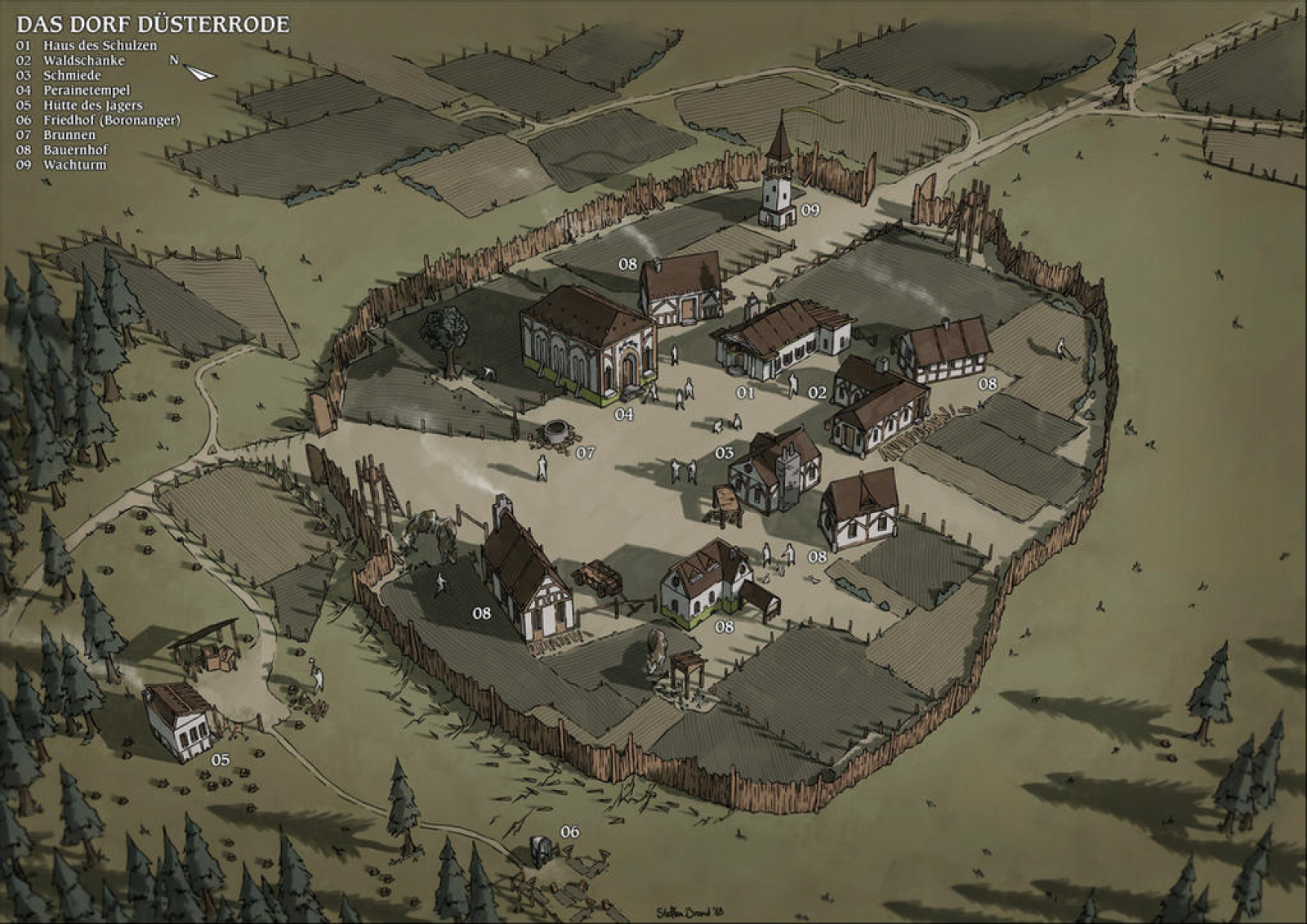 A small village in Perdebiet province.

This very small village used to have over 200 individuals before the plague. The sickness, hunger, and increased dangers that followed decimated the population to just over 70.   The town's buildings are built from wood, the same wood that the town used to export to other towns in Perdebiet. No streets are paved, they are all packed dirt, which are hard to walk by during wetter seasons. The town's square is paved with wooden planks, which are changed every few years.
Economy
Forestry
Horse farming
Barely and rye crops

Remove these ads. Join the Worldbuilders Guild
The town was started as a mining town, but the mine dried out over 200 years ago. The mine was not close to any water source, so one of the first things that were done as the settlement was started was to create a cistern. The cistern was placed in the middle of the town, so that rainwater could be collected from the roofs and channelled through pipes into the cistern. The cistern is accessed through a well found on the side of the town's square. Everyone in town makes use of the well, except for the Thimbaum family, who have their own cistern, since the manor is some ways away from the town.
Outline for Adventure April

Tweet
This world uses trademarks and/or copyrights owned by Paizo Inc., used under Paizo's Community Use Policy. We are expressly prohibited from charging you to use or access this content. This world is not published, endorsed, or specifically approved by Paizo. For more information about Paizo Inc. and Paizo products, visit paizo.com.   However, this world is independent of Paizo's world (Golarion) and most content that you will read here has been created and written by myself.
Branendorf N Village
Corruption: 1
Crime: -1
Economy: -4
Law: -3
Lore: -1
Society: -3
Qualities: Insular, Rural
Disadvantages: Anarchy
Danger: 5
Demographics
Government: -
Population: 70 (50 humans; 15 dwarves; 5 other)
Marketplace
Base Value: 500 gp
Purchase Limit: 2.500 gp
Spellcasting: 3rd
Minor Items
Medium Items
Major Items None
Economics: Before the plague, the village used to have a council of elders. They all died during the plague and they haven't been replaced. The Thimbaum has an eye towards becoming the de-facto leader in the village, and many already look to them as such. This halves the penalties imposed by "anarchy" by half.
Buildings
The village's square has a cistern underneath it, fed by rainwater collected by all the houses within the village. The cistern's waters are accessed through a well.
Factions
Thimbaum family: A small-importance noble family.
Ranger group: A ragtag group formed during the plague that grouped up to protect the village, hunt and forage to keep people alive.
Rumours