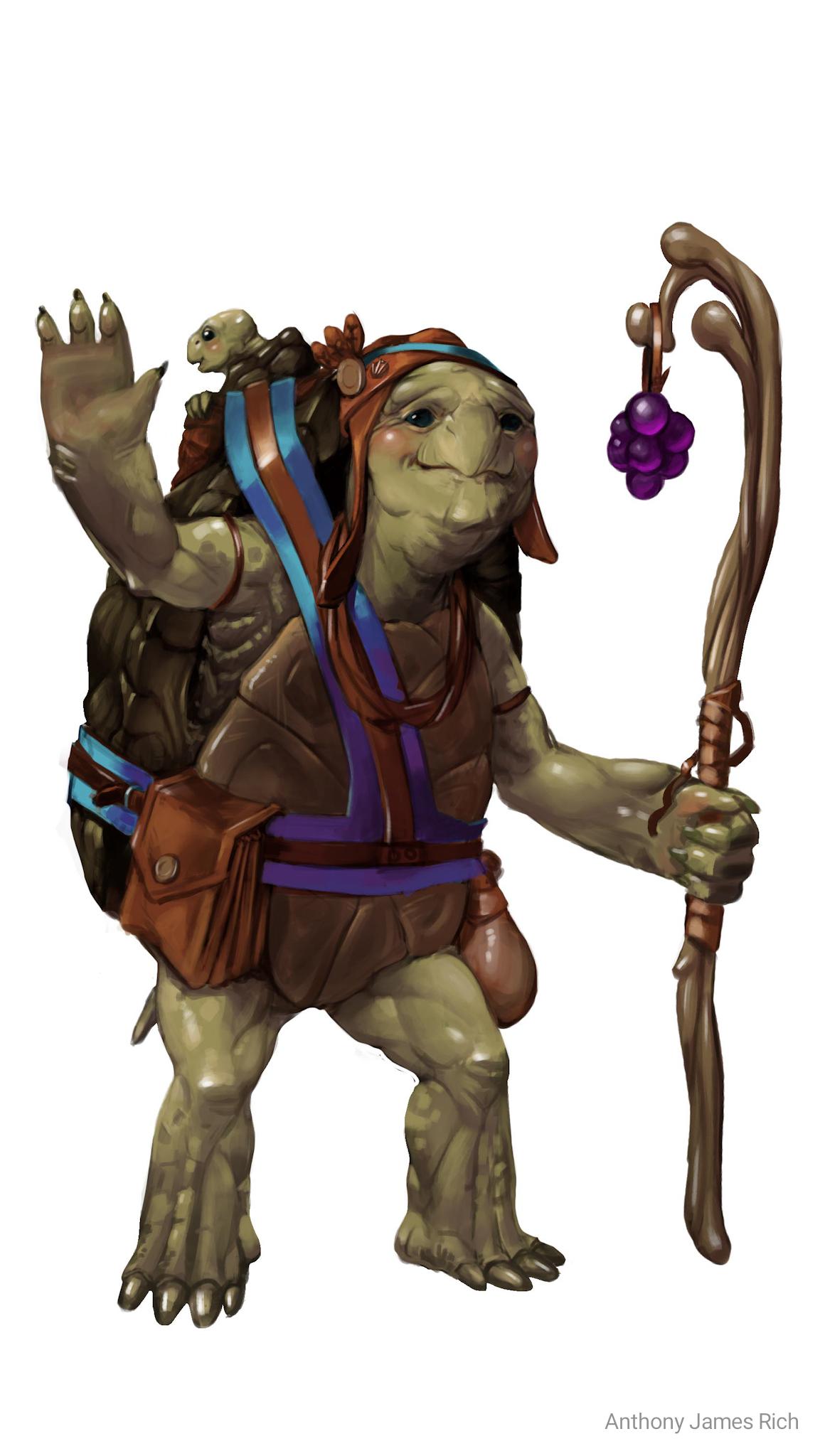 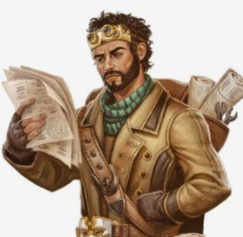 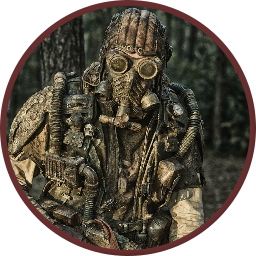 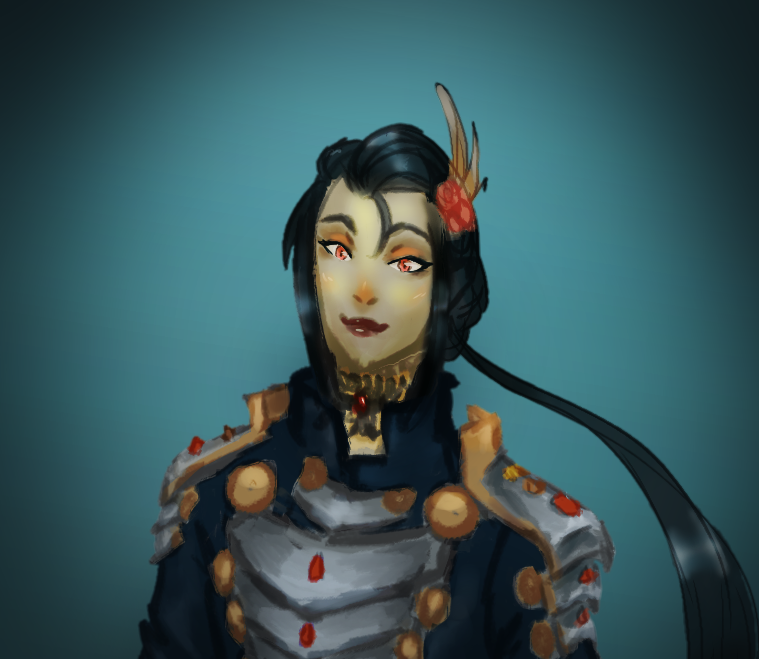 Nathiri is a powerful sorceress and bounty hunter, dangerous with her spell work and capable of smooth talking her way out of quite a few situations that her casting can't

Unfortunately the changeling is one of the last of her kind.

Formerly Nathiri was a Bounty hunter, first under her own employ and than under the employ of the Axxel Empire.

Having escaped under the dominating yoke of the Axxels Nathiri unfortunately has little other skills and will continue as a freelance bounty hunter, willing and eager to work against the Axxels.

Nathiri has endured the near extinction of her people, the torture of the survivors, having been tormented by Axxel torturers as well, the incessant whispering and commands from those same Axxels and being forced into the employ of her torturers as a bounty Hunter.

Nathiri has a near total lack of morality, willing to do anything that that is necessary to achieve her goal be it brutal torture of someone or the massacre of a village and if you stand in her way to achieve that she will go through you. One way or another.

Nathiri is motivated by the Devastation of her people and the torment she had endured under the Axxels. She WILL pursue her revenge at any cost.

The gods are assholes. don't trust them.

Where the hells do I start with this?

these people are crazy. all of them. some more crazy than others like that damned tortle. or maybe its just me. I heard in a tavern once that if everyone around you is crazy than really it is you that's the crazy one.

But these idiots were wanting to stay in a city that is controlling the minds of its people.

admittedly we did do something questionable along those lines but we gave a choice... and made that truth clear.. mental control is radically different to coercion of the mind.

right. the city. the city itself isn't inherintly bad... we've ran into its spiritual manifestation and that thing is insane. if i could hand it to the demons than i would for what it has done but i have no intention to assist that. thing.

the people inside it are victims, twisted and controlled to stay, to fight, they will burn out and die because of what they are being forced to do.

the guild hall is interesting, large but i found something bizarre about myself when we moved in while the city held us captive.

the tallest tower, I felt somewhat called to that place, the height, the fresh air, the breeze, it felt good but something was missing and i just. knew what it was. or. felt what it was.

i had covered the entire interior with a thick layer of frost, laid some gems out, some gold, the glint of it with the light from the sun and the moon. it was.... soothing.

I can't say for sure but... i. i think that what happened on automata is having a larger affect on me than i had realized, i vaguely remember stories of dragons that would lay on their horde and it was similar to what i had done... sprawled out on the frozen gems.

i need to refocus. away from this.

our tasks, yes let's try to focus on this.

a lot happened, i can't remember all of it, we found some people in the basement. former members, i was not in the best of mental places when we met them and i had to get out, didn't bother climbing the absurd stairs down and just transported my way up.

transport... teleport... that's another issue on this world. one that is quite aggravating to say the least. its as though this world has too much magic... the city's protection prevented us from leaving. the northern regions have arcane snow storms intense enough to block out my teleportation circles. i'm somewhat afraid if i gain access to planeshift what would happen on this world.

it started on automata shortly after HE saved me. freed me, the voices...

regardless when i sleep i can almost. see them... their faces. his face... when i was out of the city i could almost.. it was like a cloth was standing between us, i just.. couldn't reach out to it... i tried. i..
*a torn page follows this.*

i have to keep this quiet, i can't let the others know what i've been seeing... feeling... let them continue to see Nathrin... Nathiri. the crazed Bounty hunter... the psychotic electromancer, they'll think i've gotten soft otherwise.

soft. right. our tasks. we had dealt with a few different things already, aided in fighting off two demon invasions though whether it was willing or not is also the problem...

i still believe that we should leave this damned city to burn... the demons will break it over time... its NOT our problem... and unless i can shatter whatever control is in place i have no real interest in helping... despite how much the others seem determined to assist in this crazed effort.

the people themselves though. friendly enough... i do like some of them. well... tolerate some better than others but with the constant 'be good. protect. kill demons' drumming on in my head its hard to really care.

i want to like this planet... it has potential. giant beasts.. adventurous people... various different regions. i could see myself settle here... one day... maybe.

hah. yeah. maybe i'll reawaken Ilithrin, i don't know why i have her in here. the others i do. Nathiri and Nathrin, Vrell and Vorak, Dorian and Diana.. they make sense.... Where the hell did i pick up Ilithrin... she's soft.. not a hunter, not a killer.... maybe...

still. the silence outside of the city was.... peaceful. i could relax for the most part. even hunting that beast with the whistling winds was enjoyable.

and than... there's the others.
I'm not sure what to think about them.

the tortle... foolish... soft.... she is a child that should not be with us. she has innocence to be preserved. not rended apart by lingering with scum like us.

the would be god. no morales. thinks himself a divine and the others have supported that claim... i like him when he acts mortal... when he lets that divinity get to his skull i remember why i despise the gods... superiority complex self centered sons o- *the writing switches to some kind of archaic glyphs akin to rune work, the lost written language of the changelings*

the hell? i... i can read that? strange... i'll have to try and practice that more later.

the tinkerer. hah. she is a curiousity, i cant help but wonder what she was actually up to back in automata with how capable of a shot she is with us.

the trash panda. surprisingly. the only one i have some respect for. he's a simple enough man, simple goals, simple interests.... or maybe i'm just blind to what he is actually to.

the bitch. yeah... hah. if i have to write the others may as well write my own thoughts down. no idea what they have to say but if i saw myself from the outside... hmm. unstable. lightning flinging maniac..

Hmph... you made this bed Nathiri... best lay in it without complaints...

just... just need to practice... ignorance is bliss. when your thoughts are invaded turn your mind to activities, numbers. music.
music... you're good with the pypes. play them.
the only thing THEY let you keep... play them.
Remember your lullaby and play them...

The major events and journals in Nathiri's history, from the beginning to today.

I'm not sure what's going on but I've decided to try and get my thoughts together in a journal, hopefully I'll be able to figure out what is happening with these entries. It's been a few days since I was able to escape from the voices thanks to that ma...

Where the hells do I start with this? these people are crazy. all of them. some more crazy than others like that damned tortle. or maybe its just me. I heard in a tavern once that if everyone around you is crazy than really it is you that's the crazy o...

The list of amazing people following the adventures of Nathiri.