Campaign Page
Run by orangepez42
Played by
jebusone
Other characters

This is William Borden a suspended wall guard of Foraminis. He is always seen with a Longbow and light crossbow strapped across his back and two hand crossbows on his belt.
Age
19
Gender
Male
Eyes
Gray
Hair
Brown
Skin Tone/Pigmentation
Pale
Height
5 ft 7 in
Weight
190 lbs

William Borden arrived in Foraminis around 3 years ago. At the time he had been living in another village with his parents when the town was completely destroyed in what appeared to be a magical storm. During this storm when it looked like William would be crushed under a tree that had been lifted in the air he innately activated Misty Step without realizing it. Due to the magical energy in the air Misty Step became supercharged and took William to Foraminis. So far he has not discovered if he is even in the same plane as his original home, but has made himself at home in the poorer sections of town.

William has some basic schooling, but no form of formal education most of what he knows what taught to him by his parents or the wall guards.

William is a wall guard for 3 years but was recently suspended for bringing women to the top of the wall to impress them. He has made some friends in the wall guard. A female forest gnome named Phigben and she goes by Ben, a male half orc named Seth and a female Firbolg named Qinala. Finally, the wall guard supervisor for my squad was a female eladrin named Ulwena.

William has made several friends amongst his neighbors due to his lawful nature. He has stepped in and broken up several nefarious actions by unscrupulous characters and most now avoid his neighborhood as it is just easier to find prey that doesn't have protection. He also rents his small apartment for 1 silver per week. 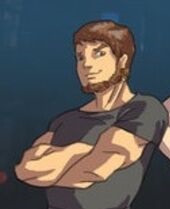 I was pulled into the city guard v wall guard softball game as the ninth player. City Guard had 17 runs to the wall guards 1 run it was a slaughter. I made 2 errors and had no hits.

The major events and journals in William's history, from the beginning to today.

Start of the Adventure

While drinking inside the Tingly Ale. William receives a a flyer that directs him to help prepare to stave off an invasion. Having recently drunk away his savings this seems like a decent money making opportunity that may also get him reinstated to the wa...

I was pulled into the city guard v wall guard softball game as the ninth player. City Guard had 17 runs to the wall guards 1 run it was a slaughter. I made 2 errors and had no hits....

The list of amazing people following the adventures of William.