Sentinels of the Dragon Isle Campaign 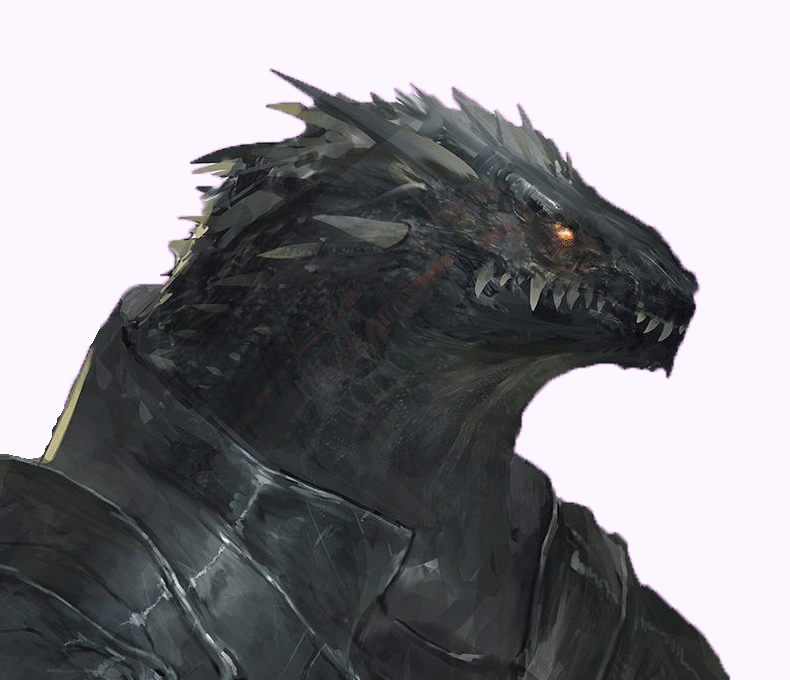 A lizardfolk warrior carved with runes who serves as the Executioner of his squad at Station Desolation.

Vutha was not always my name. I don't even remember my egg name. I remember some: Mir, Dar, Val, Kor, but which was mine is lost. It matters little, Father cut trees for coin and I was born in the last of many clutches. The trees were too few for me to join him, and the gems too few for me to be apprenticed. So, when the Blue came for conscripts, I was given a stick and sent to kill. So, I killed. They gave me a number, 255. That's who I was, and I just wanted to kill enough that the Blue would shower me in weapons and gems. I remember having pride when I was selected for a great honor. Selected for special service directly for the emperor. So, I marched into the jungle with all the other chosen. They walked us into our doom, down into the ruins of the Carvers. The walls were covered in their markings, still full of their strange magic, and haunted by their restless souls. We were left there to learn or die. Probably both. They let the dead haunt us, kill us, feed on us in exchange for the survivors learning thier secrets. How to craft their Runes. The magic markings were placed on our things and our scales and our souls. It is some deal with the emperor. He made some ancient bargain or placed some obligation taht keeps whatever is left of them down in the depths of that accursed place. I fought, I killed, I suffered, I learned, I forgot and I changed.
Then a dragon clanswoman dragged me out of the dark to begin my service to the emperor. Finally, I would enter the emperor's service, begin to fulfill the purpose that I endured so much suffering for. I was auctioned before a gathering of clan generals, a killer for hire, it was a White who chose me. He called me Vutha, before it was my name. I found it funny, I thought it was just soot or smoke from the forges blackening my scales, wondering what they would say when it washed off. It didn't. They brought me to his army, and I fought for it, turning foes into corpses with the secrets of the Carvers, but I had brought more than just their magic with me. The darkness of that place now clung to my scales, their ghosts still haunt me, their curse still taunts me. So, the soldiers didn't want me in their barracks haunting thier shadows. The White ordered me to go live in a Lizardfolk village near his castle. They didn't want me there either, but I was fed, given a lodge and left alone, until they had trouble. Some thing had been killing off workman close to the castle. They said it was the White's monster, they said I was also the White's monster. It was Baeshra who told me since I was White's soldier I needed to fix the village's problem. I laughed at her, but laughing felt good, so I agreed. I went to where the folk had died, and it didn't take long to find the killer.
A skeletal drake wandered the night killing any that came in its way. So, I got in its way, and I'm not so easy to kill. I brought back its skull, told them I was the only monster left to worry about and demanded payment. They paid, and they fled, except Baeshra who asked for my name. I realized I had none to give her. The only thing I could recall to identify myself was a conscript number. In the ruins, they had called me Skink Meat. In the White's Army, they called me the pet lizard. Those are not names. What my parents had called me, had been lost in the ruins of the Carvers. So, I told her the truth, I hadn't had one in so long, I couldn't remember any. She didn't believe me. I told her to get lost, but the next time I returned from a skirmish, the local chieftain came to my lodge, and they named me Vutha. It is because I carry no torch. I walk out of the night and into the night like I was born from it. I accepted it, and it was not the last surprise I found coming back from warring. It was less than a year before the chieftain was again at my lodge telling me that Baeshra wanted me as her mate. I still don't know why, maybe because many of the workman that the drake had killed were from her family, maybe because some pesky tanner she detested sought her as a mate, maybe because she was just used to herding large animals. I was not stupid enough to decline. Then, my life got better for the first time I could remember. My lodge was filled with something other than ghosts. Our first clutch was healthy. The White did shower me with weapons and gems as I slaughtered their enemies. I thought I would become a war chief, and live my life between the death of the battlefield and the life in my lodge. Until, I got picked for another honor: more special service, directly for the emperor, again. Now, I sit here on the edge of the world, far away from all the places I know, to keep killing. I wonder what is the worst curse, the ghosts or my luck.

The major events and journals in Vutha's history, from the beginning to today.

The list of amazing people following the adventures of Vutha.