The son of two powerful mages, he himself is a humble magic practitioner. Having spent the majority of his life studying lore and the arcane, he earned the job of Headmaster at the Millmire AIA branch.

The son of two powerful mages, he himself is a humble magic practitioner. Having spent the majority of his life studying lore and the arcane, he earned the job of Headmaster at the Millmire AIA branch.

While most would say he is simply lanky, Jerard's physical development, majority, was actually stunted.

Jerard is a standard human for the most part. The difference being the brittle growths he develops on occasion throughout his abdomen and arms. These growths have appeared since childhood and have a resemblance to decaying or wilting dragon scales. Of which, it cannot be determined.

He has an oval face sporting a pointed. Narrow cheekbones and thin, pink lips. Almond-shaped eyes with long lashes and thin eyebrows. His nose is straight and features freckles during the summer months. Jerard has small ears with attached earlobes. Some scars show there used to be earrings.

If you ever got him to smile, his canines would cause people to suspect mixed blood. Due to them being sharper than average.

His long, almost purple hair is an oddity among human's in his homeland.

Reluctant to express his motivations due to superstition. While he does not speak it to others, Jerard is motivated by his desire to prove wrong the ill-fueled ideas his mentor and mother installed within him. By operating at a high-level within the organization, and taking the position as headmaster, he aims to embody and genuinely express the tenant's Arcana Iblis Archive is meant to.

Mentally, Jerard is what some might consider sub-apex. His mental prowess surrounding lore, technical knowledge, and theoretical works is thanks to natural talent. Bolstered by years of conditioning and torturous-levels of study. Planar lore and theoretical spell crafting are his two schools of highest comprehension. In addition, he seeks to expand his knowledge on superstitions and the Dragon Prophecy.

As a setback to sub-standard physical training, he is not able to exert on-par strength. Only through constantly exploring the world has Jerard been able to condition his body enough to survive in low-risk combat situations. He has trained to off-set this by utilizing spells and clever tactics.

Refar Kiltour a.k.a. Dux-Weaver: Refar is Jerard's mentor, master, and if you probe deep enough, a nightmare. The long-living elf was the only disciple of Morgran the Shaman, a dwarf who studied the Dragon Prophecy. Refar taught some of those teachings to Jerard. A shrewd, sly, and manipulative man. His goals seem to be the same as the 10th Council; gaining knowledge for knowledge's sake. Jerard feels there is something darker to the man, but was never able to figure it out. Having sent the wizard on most of his early missions and adventures, Refar knows the insides and outs of almost all subjects and the Archive's workings. If either needs anything from or for the organization, the other will reluctantly listen.

Vorka: A Friar and Cleric of the Silver Flame. She is an adventurer who seeks to bring about change through many small acts of good. Hoping they will one day magnify into a large difference in the world. A kind-hearted, but nowhere-near-meek- half-orc woman. Through happenstance, Vorka and Jerard have crossed paths a number of times out in the world. Many times as allies on a similar path, or meeting in a rest stop, inn, or tavern. On a few occasions, when Jerard operated in subtler ways, they acted as adversaries without her knowing. Vorka became a person Jerard confessed all his sins and thoughts to. The last time they met, they shared a night together. Jerard ran off before daybreak, confused by his own actions. Leaving behind a token of his affection.

The Ali'Stre family, located in Aundair, has a history of producing impressive wizards. A multitude are capable Warmages utilizing warmagic. Few others simply are renowned for mastering two schools of magic. The current patriarch of the minor house is Gerald Ali'Stre, with his wife Lilianna Vecna. Their only child being Jerard.

Ananta Ali'Stre The Excitable: Jerard's grandfather, Ananta is clever and uses his age to deceive others into thinking he is weak and harmless. While not seen as a threat, this allows Ananta some peace as he continues to live his life filled with antics and shenanigans that cause his wife and grandchild to smile and laugh. But the rest to worry. Once known as Ananta the Polyscalpter, he is a powerful wizard. Wise in the field of Transmutation.

Sarala Ali'Stre Meeker: Jerard's grandmother. Once a combat medic, her devotion to the Sovergin Host grants healing abilities. These healing abilities, along with her traditional training as a doctor brought Sarala much praise and gratitude during the Last War. Having lost her eye, she replaced it was a small crystal that acts as a magnifying glass used during examinations. An outwardly stern woman, she delights in the mischief her husband often gets himself into. Yet expects better from her children and younger family.

Gerald Ali'Stre: Jerard's father and the current patriarch of the family. Known as Gerarld the Ward, his knowledge in Abjuration and outsiders has often aided the Druids of the Eldeen Reach in suppressing aberrant forces seeking to enter Eberron. He also is in charge of sponsoring several small groups of adventurers, a museum, and several local businesses in the town their estate resides in. Though he is a smart and charming man, his relationship with Jerard is mostly estranged. Having almost no say in how he was raised. Even while his son is in his mid-twenties, he struggles to find any common ground, or show affection. Though he tries when he is given the chance.

Liliana Vecna: The mother of Jerard. A sorceress with draconic blood, she is a master of divination rituals. Not much is known about Liliana before she met Gerald and married him. She claims to have no memories of her past before a year or so before their meeting. Up until her son entered the Arcana Iblis Archive, she remained home to raise and watch him. Frequently having clients come to her. After he left home, she began to travel all the time. Always keeping her activities and destinations out of the conversation.

While the world of Eberron has many religions, Jerard respects those who go down their chosen path. In turn, he practices a sort of animist view. Acting as though a portion of the Progenitor Wyrms resides in all things. Thus, all things have spirit and soul. The whole of the universe is his God, and his God is within everything. The Good and Bad Aspects, along with the Neutral Aspects.

Tends to use "Love" when referring to those he wishes to form a connection with. Whether that is friendship or something deeper. 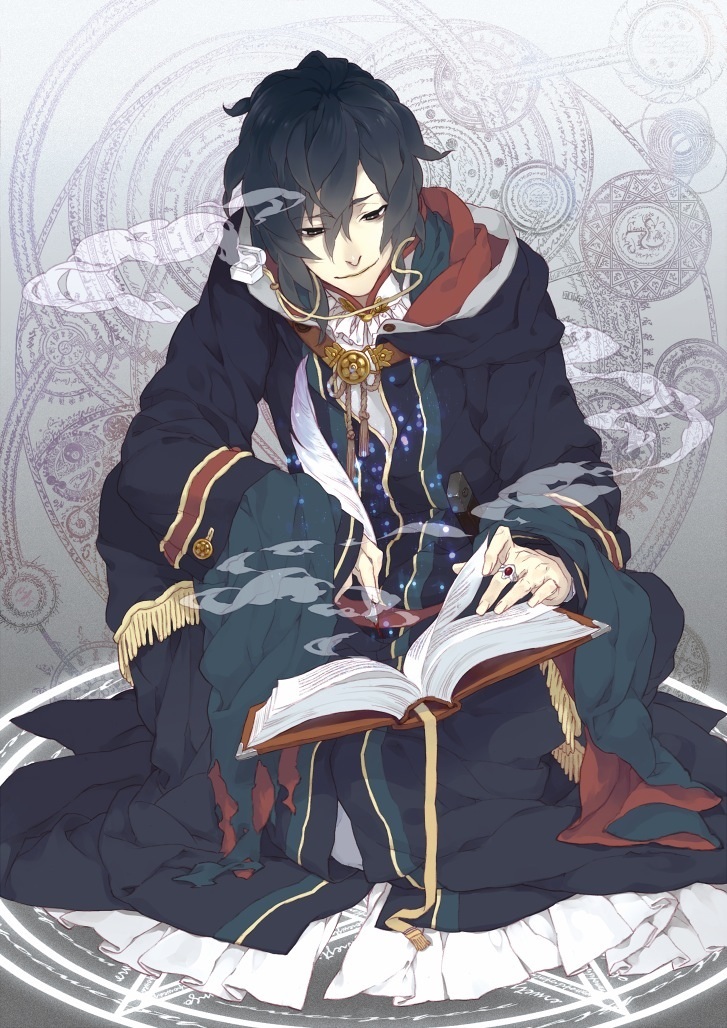 The aroma of burning embers echoed the once stronger smell of smoke within the inn’s sleeping chamber. Dusk had fallen over the world and there was a single moment of total darkness before a small glimmer of light returned. Dragonshard lamps and lanterns illuminated the streets and several homes. Candles and oil brought visibility to other abodes. The fire was about to go out, having reached its climax long ago. The apprentice amused himself, thinking he and the flame were alike in that regard.

Designs of a smile crossed his mind yet didn’t appear on his lips. Jerard was tired. A thin layer of sweat managed to stick to him. It was Vorka’s fault he had been dirtied again. Her body grinding against his produced new sensations. New reasons for his body to pump rarely used adrenaline. It gave him pause.

The ruins were behind them; an adventure over and done with. Refar shouldn’t have any complaints if a sandstorm just so happened to block his path back to Sharn.

Abruptly a soft sensation reached into the Apprentice’s mind, pulling him from his thoughts. Marching down his thigh, Vorka’s hand danced a tease while her smile accompanied the act. A pair of freshly sharpened tusks framed her bottom lip. They were a dark green bordering on black from to her lipstick. With large, naturally narrowed eyes common for Orcish tribespeople near the Demon Wastes. Yet her eyebrows were thin and delicate, well-kept and edged.

She smiled, encouraging a brilliant beam from Jerard. They could exchange words at that moment. Words of pleasure or comfort. What words could express their eyes conveyed more. Reaching up to Vorka’s face, Jerard’s hand seemed smaller, almost like a child. Yet he had just become a man in some cultures. The contradiction was humorous to him. A soft kiss connected them. For the second time this night, Jerard experienced peace.

The major events and journals in Jerard's history, from the beginning to today.

"Today I found out I am different. And I hate it. I don't like how my body looks. I hate. Today Karnisa invited me to go swimming with her. It was thrilling. She looked so pretty with her hair up. I could see her blue eyes. It's what everyone ta...

Spoiled Mind of an Old Youth

Letter to Grandfather and Grand Mother

To My Beloved Grandparents, The trip to Millmire came swifter than I expected. This land is filled with so many interesting and unique peoples. It is a shame I will be spending most of my time working. The first few days were filled with meetings and i...

Letter to Father and Mother

To My Honored Father and Mother I have made it to Millmire safely. The city is of a unique layout, with even more interesting peoples. I feel good at the prospect of forming connections in this city. The Archive is now up and the classes will begin aft...

Refar, The new branch is coming along nicely. I shall send my reports and all the needed information to the Council within a month following this letter. But a request for budgets and additional necessities will come sooner. I write however not to ...

The aroma of burning embers echoed the once stronger smell of smoke within the inn’s sleeping chamber. Dusk had fallen over the world and there was a single moment of total darkness before a small glimmer of light returned. Dragonshard lamps and lantern...

The list of amazing people following the adventures of Jerard.