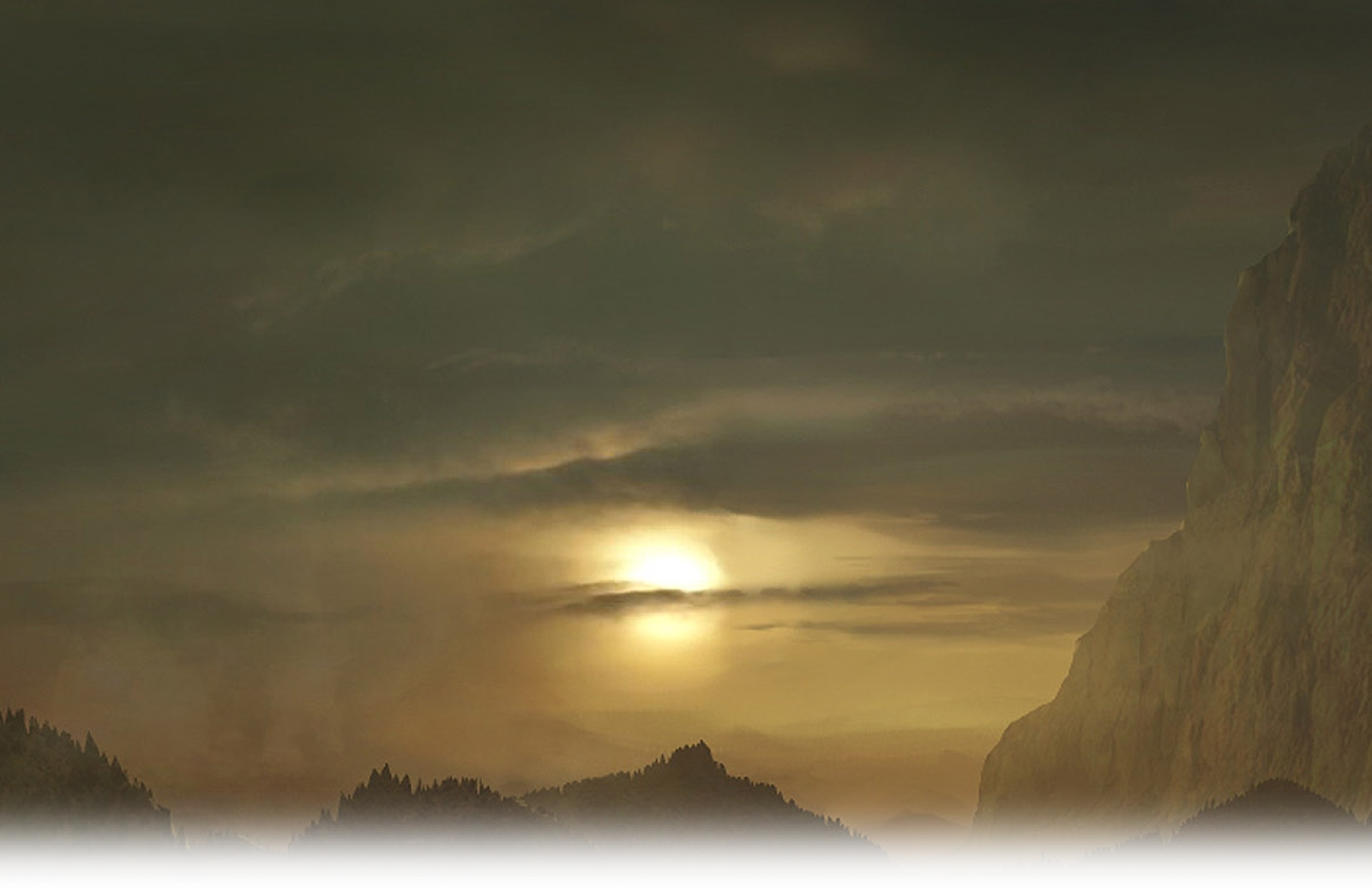 With the early hours of morn peeking down on his back, the commander oversees the darkened battlefield from his vantage on a hill. His lieutenant remarks and points towards the distance. He follows with his gaze and spots a retinue on horseback with one herald waving a grey flag before issuing an order. The lieutenant raises their own grey flag. Both parties regard each other for one moment more and then turn away from the battleground.

The travelers inspect the blackening sky, only half a day into their trek. As the sun begins setting behind their backs, they find a nook near the path. One sparks a fire that casts their shadows on the surrounding woods. Then, the rest huddle about the heat and speak of tales of old dusks past.

A mother peaks out her window for a moment to look up at the black, moonless night. With the sound of clanking and crying behind her, she turns and shushes her children, who meddle about restless from a day without outside play. When her admonitions fail to quell them, she warns of invoking the wrath of the departed who demand reverence on this day. They soon fall quiet, even shaken, and gather by her while she speaks a prayer.

Occurring on some day during the last week of Arkrul, the winter solstice in Varia has, in the modern vernacular, been referred to as the Day of Dusk. The occurrence precedes the New Year’s Dawn by only one week at most, forming a string of commemorations during that time of the year. Over the millennia, scholars have discovered more concrete evidence of the winter solstice's history and the reaction of the continent's dwellers to it. In some regions of Varia, observance of the Day of Dusk has come to reflect after these historical records, though shifts as well with the times.

The winter solstice is a phenomenon that has, presumably, appeared since the creation of Zentrem. During the First Era, records suggest that the event had been associated with the deity known as Aark. However, as with many aspects of pre-War of the Scourge culture, the specifics remained up to speculation; though, the link with Aark implied that it may have been the subject of somber observance.

The War of the Scourge

The War of the Scourge marked the first known period of the solstice being referred to as the Day of Dusk. Accounts dating back to this time placed cultural importance to the event, for good and bad. The winter solstice, along with the summer solstice, also served as a general indicator for the time of year, helpful for when the haze of the war muddled temporal perceptions.   For some common folk enduring the conflict, the solstice signified a day of dread and caution because people often viewed the lingering darkness as a prime time for the Scourge to appear and attack (though this belief was, for the most part, erroneous, as will be later explained). Denizens ceased the day's functions and isolated themselves in their settlements for protection. Among the religious, the solstice was thought to be a sign of displeasure from the gods, making it a day for fearful reverence and prayer.   To devotees of Aark during the war, the solstice signified a day for ends as well as the celebration of absolution in death. Thus, certain individuals, known as Duskwalkers, stepped away from the confines of their settlements during this day. They were tasked with burying the recently deceased and conducting rites to honor those already passed, though they have also been noted to carry out more menial tasks for the upkeep of their settlements. In Southern and Western Varia, settlements assigned the esteemed role to only capable individuals. However, most elsewhere in the continent—barring the Kor Mountains whose natives did not abide by the tradition—the unfit, the unwanted, and transgressors of a settlement's authority were often designated as Duskwalkers, with the role serving as their trial to worthiness, if not repentance.   For groups combating the Scourge, the Day of Dusk represented particular tactical importance to their efforts. Over years of fighting, strategists observed that the Scourge exhibited little to no activity during the winter solstice. The exact reasons remain unknown, though has been posited to be linked to Aark's power and affiliation with the day. As a result, major relocations and mass travel among troops were not an uncommon sight.   After the formation of the Varian Coalition, the winter solstice proved to be one of the busiest and lucrative days of the year, posing a secure opportunity to set up bases and position their forces. It also presented a rare circumstance where the Corruption did not impede so heavily on magic practitioners' abilities whilst in the continent. Reportedly, the Archmage Vyliar'faeien and his circle of mages initiated the ritual to banish the Corruption from Varia on the Day of Dusk.

With the establishment of the Avonian Calendar during the Second Era, the winter solstice fell at or around the last week of Arkrul, the month named in honor of Aark, thus continuing that relation from previous ages. Its observance remained relevant throughout the Era of Restoration. By the Second Era, the Corruption's banishment and the Order of Avalon's rise removed the Scourge as a looming threat over the lives of Varia's denizens. The winter solstice thus shifted into a day of remembrance for the conflict observed in nearly all facets of Varian life, often signified by a pause in the labors typically undertaken in the day. However, settlements in the Kor Mountain ranges eventually minimized the extent of their commemorations in lieu of more industrious pursuits. Regardless, observances of the Day of Dusk had not changed remarkably even well into the Third Era.

For most of the continent, the Day of Dusk has become a traditional day of rest and generally muted reverence. It marks a brief reprieve before Varians begin their preparations for the soon coming New Year's Dawn. Thus, the day is often taken as the spiritual end of the year and the precursor to the celebrations ushering in the new beginning of the next. Indubitably, observances across the realms reach into all aspects of Varian life.

Commonfolk typically only work half of their regular hours on the winter solstice, with the rest of their day typically being spent within their homes. Many businesses in major settlements do not serve patrons on the Day of Dusk without actually closing for the day. Similar to the fighting factions during the War of the Scourge, establishments spend the occasion to supply, organize, and prepare for the oncoming commerce that the following week and the beginning of the new year brings.   As a result of most other folks limiting their activities for the day, the Day of Dusk also lends itself to trade caravans and merchants traversing the roads and occupying most of the routes. Though rates of bandit attacks do increase as a result, likelihoods for success have been estimated to actually be less than normal. The commercial groups tend to naturally form a convoy whilst traveling from one location to another, making themselves more defensible from any but the most coordinated of bandit robbings. However, the presence of migrating troops also provides a measure of safeguarding.

Within areas in Varia possessing legitimate governing powers, there is a general taboo over passing a law on the Day of Dusk, if not even discussing such matters at length. Superstition even extends to the act, so that misfortune would fall upon those who do so, if not cause the failure of the legislation in question. While government and bureaucracy do not generally come to a halt, nor is expected to, the winter solstice provides a certain level of solace to government workers. When citizens confine themselves to their homes and communities, bureaucrats have the opportunity to spend the day resolving previous assignments—or at least attempt to do so—than address new ones.   Furthermore, the commemoration of the Day of Dusk extends to even states embroiled in war and violent conflict. Participants may abide by unspoken truces in reverence to the solstice, if not Aark himself. On the morning of the solstice, surveyors scan the battlefield for the opposing side. Once spotted, the most common symbol or call to the day-long truce involves one party waving a plain grey flag for their would be adversaries to see. More often than not, the other side accepts by reciprocating the gesture.

Varians observe the Day of Dusk within the confines of smaller communities, if not solely individual households. Regardless, they devote the better part of a day to indoor activities, harkening to the War of the Scourge. While long since debunked, there had also been lingering rumors that exposure to the darkened sky of the winter solstice paved a way for the Corruption to affect the body. Thus, fear of the Scourge, and to an extent remembrance of that desperate period of Varian history, has remained part of the general mindset of the populace regarding the day.   Even into the modern ages, the Day of Dusk continues to be regarded as a day of reverence for the god of death, Aark. Some commemorations focus on the deity's somber domain, with rituals to honor the passed and prayers, whether conducted individually or in groups, for the peace of the departed. However, this aspect of the Day of Dusk has also seen relatively more lively celebrations. Again in reverence to the Varian experience during the War of the Scourge, while the darkness of the solstice may seem long and drawn out, Varians could expect a new day to follow which, not too long after, led to the new year. Thus, the Day of Dusk has come to represent the ushering of another beginning and hope, knowing that there is a light that follows.   Duskwalkers are another aspect of Day of Dusk commemorations that have survived, albeit in altered forms, from the times of the War of the Scourge. In Southern Varia, they are most associated with individuals who can detect and address the Scourge, independent of the Order of Avalon. To the northern regions of the continent, they became the "duskers" which refer to either people who work with the deceased (i.e. undertakers, morticians, etc.) or, more negatively, to graverobbers and increasingly other criminals. Thus, their reception by present masses are as mixed as they were in prior Eras.1


1. The Duskwalker Chronicles by Lemil Wren, first published in 3527 3E, is a relatively recent body of work that informed (somewhat erroneously) and enamored scores of readers along the western and southern coasts of Varia to the legends and livelihoods of Duskwalkers.

"Each waking moment of my life now is to survive. To fight. To survive. To live. Or so I thought those, to survive and to live, were one and the same. But what is to live when one seeks only survival? Each day that passes, I find the answer always slipping my grips. Something fading. And with each setting of the sun, I find my mind slipping. And on the darkest day...I lose, or so I think. Since the light still peaks in even after such length. And I resolve that perhaps I can survive a bit longer."
— —Unknown, Journal of the Unknown Knight

through each empty street.

Beyond the sculpted stone

the empty fields do sway.

No man or child in sight

to greet the dimming day

You put a lot of thought and effort into this and it shows. You've got a nice mix of informative text and flavorful text here!