Goblins have always been there, hiding in the nooks and crannies of the "civilized" nations and the more "advanced" races around them. No one knows exactly where they came from. Some say they came from the Feywild, crept out of the Shadow, or are a stunted twisted version of some other race. For most of known history, they suffered under their reputation as heathens of low status who were easy to dominate and manipulate.

They served as fodder for any number of evil empires, sometimes their children were used as literal fodder for monsters and the hungry undead. The old saying was, "What's worth less than a goblin baby?"

Throughout most of the civilized world, that time has come to an end. The twin events of the Withdrawal of the Gods and the Concordance for Survival Treaty served to end the seemingly eternal subservience of the goblins. With the new mandates of justice, representation, and the abolition of slavery, the goblinkin joined the ranks of the "civilized" races.

Much to the astonishment of their "betters", when given an equal chance to succeed as the children of other mortals, goblin children were equally capable of mastering magic and advancing in the world as every other child.

Despite their status in Sovranty and Concordance lands, goblins still suffer persecution in other lands. The magocracy of Kiris is especially notorious for converting goblins and other "humanoid" races from outright slavery to "bond servitude."

Bond servants are forced into contracts, sometimes at birth, that they must fulfill to buy themselves out. Although not technically slaves, they earn very low wages and are not allowed to leave the domain of their employers without permission.

Goblins who escape to Sovranty or Concordant lands can escape the clutches of bond hunters, but any bond servants found in "bonded" territory can be returned to their employers to complete their contract.

Goblins have shown a surprising aptitude for artificing and engineering. Their small size allows them to work inside cramped engines easier than the larger races. Skilled mechanics of either discipline are valued as shipwrights, locomotive engineers, and magitech artificers. Clockwork gobs are the pride of their communities and many families boast of the first in their family to finish school or join a profession formerly limited to one of the "superior" races.

There have been legends of blues for centuries. These psychic goblins with psionic powers used to be born to goblins every few decades, but their numbers have gone up as goblins have had more access to better nutrition and clerical care. Now every community has a handful of blues to help out the traditional shamans and medicine men formerly dound in goblin tribes. 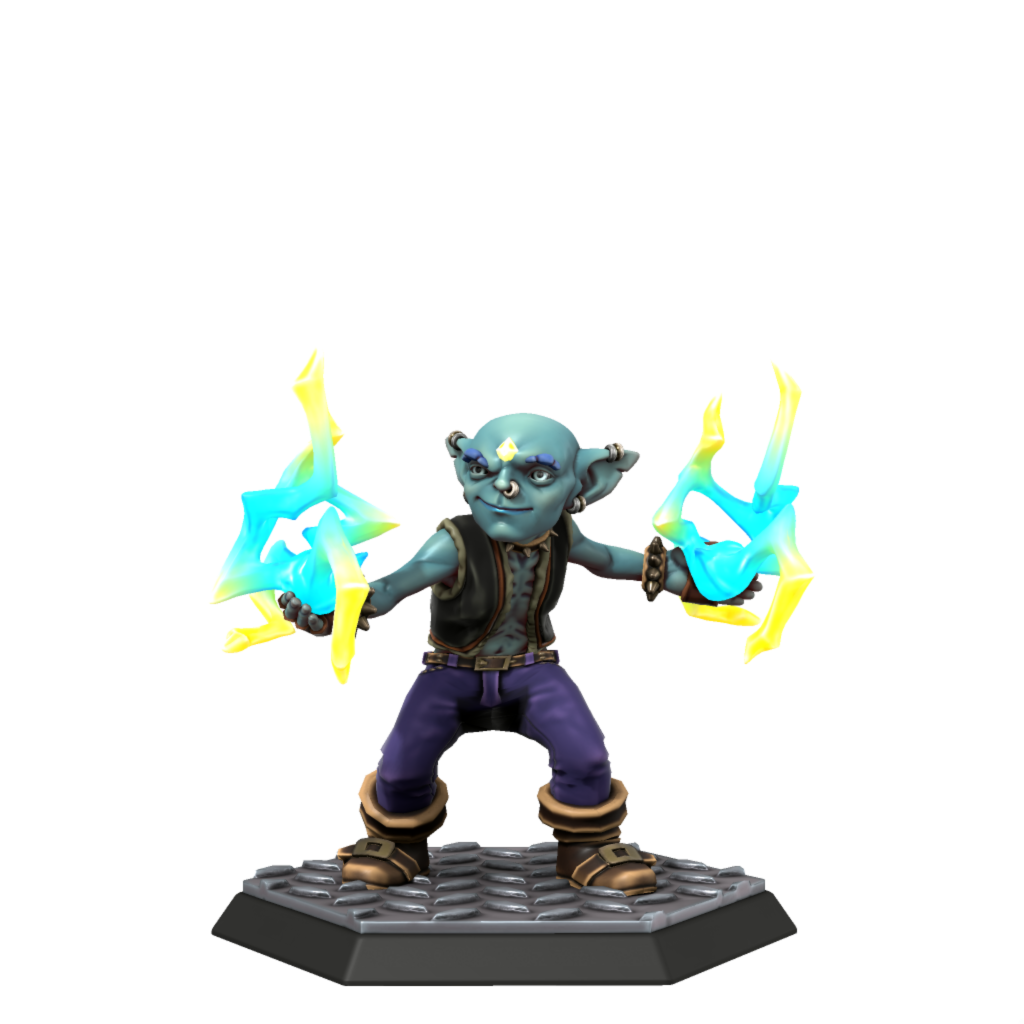 Of the Mind the Fire, Blue Goblin Sorcerer

Of the Mind the Fire, Blue Goblin Sorcerer of Ta-Arma by Chris L

This blue goblin sorcerer was born with mental powers that he uses to defend his people. He fights against the entrenched powers of Ta-Arma to see goblins as their equals.