World of Wizard's Peak    WoWP Codex    Creatures    Spirits      Baku
I want to adopt a cute pet in your world. What is it and how do I look after one?

The benevolent baku are celestial creatures that feed on dark spirits and nightmares. They float in the Ethereal Plane adjacent to the Material near mortal settlements. They are especially attracted to children and innocents, protecting them from evil fey and aswang that come to feed on their purity. They have become more common in the Kirinal Concordance Zone where the influx of minor creepy-crawlies from the Kirinal Pit create a rich feeding ground for hungry baku.

The baku are shy, usually staying hidden in the Ethereal from the mortals they protect. When someone catches a glimpse of them, they appear as brightly colored chimeras, a mix of elephant, tiger, rhinoceros, and oxen. Young baku are the size of cats, while elder baku can grow up to 9 feet tall at the shoulder.

Every child in the Zone that goes through the Celebration of Children ritual is assigned a young baku by the Heavenly Council of Ki-rins. The baku and the child grow up together with the baku serving as the child's unseen protector and constant companion.

Children with magical or spiritual gifts can become aware that their "imaginary friend" is actually real and actively defending them from bad things. Especially good children can coax their baku out of the ethereal when no one else is around. The baku enter the Prime to play with their friend and cuddle with them at night.

"Mama! My friend wants a piece of candy too!"

"Stop being greedy, my love! Your baku eats bad dreams, not candy!"

— Every child to every mother.

The friendly baku operated in happy anonymity for a hundred years in the Zone until an especially bad Shatter when the Far Realm manifested in the Pit. Soul eating monsters invaded the world and parents throughout the Zone panicked when they realized that every child around the Pit had disappeared in their sleep.

Once the Far Realm faded away at dawn the next day, the sleeping children all reappeared in their beds. Their baku had pulled them into the ethereal to protect them from the monsters that threatened them.

As every child grows up, their bakus grow up too. The day finally comes when the child is strong enough to not need their baku anymore. Usually, the baku slips off unnoticed, also ready to live its own life. But those children who've formed an unusually strong connection to their baku have it harder. Their friend appears to them when the time comes. They say their goodbyes through tears. 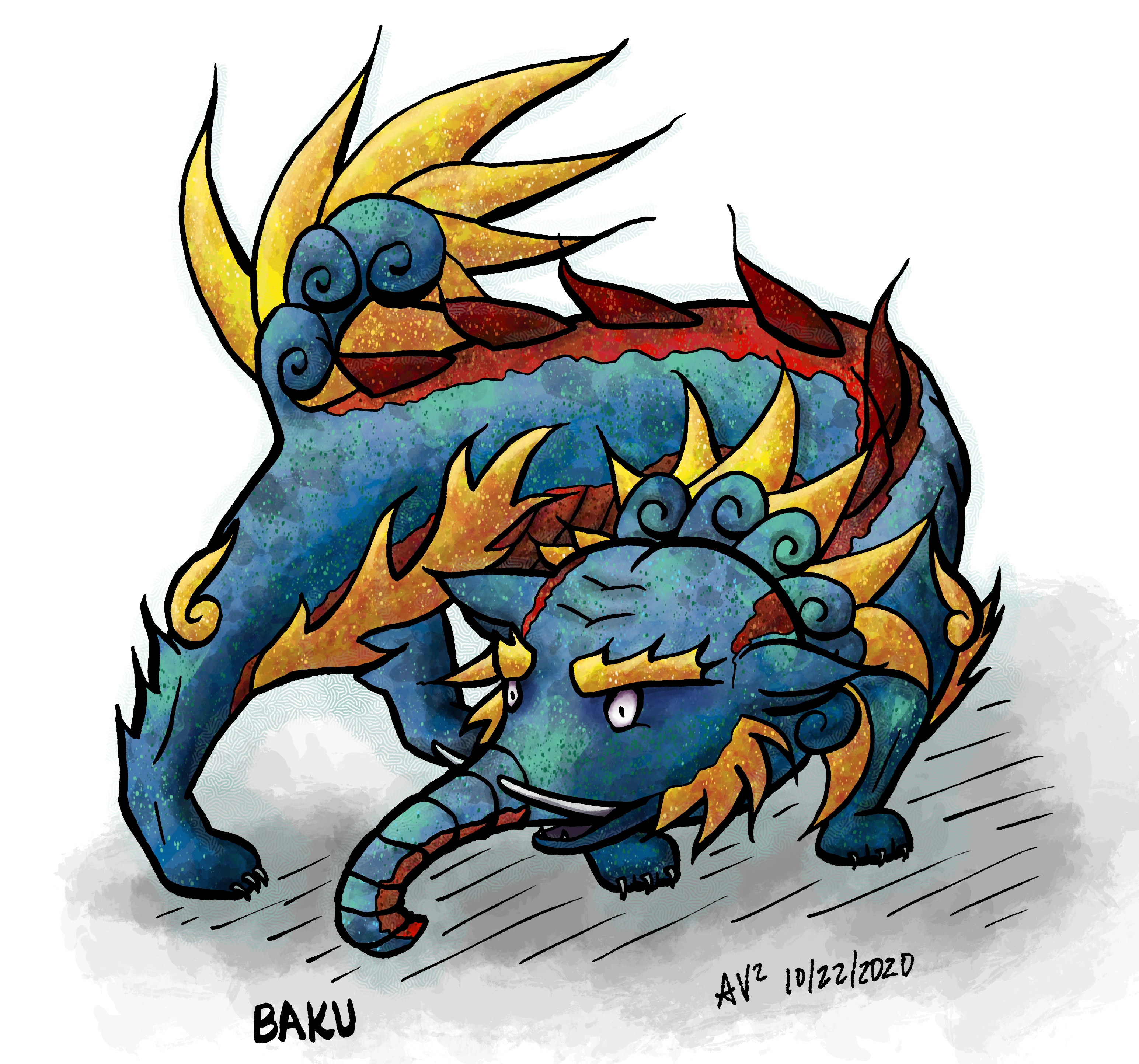 Baku by Amy Winters-Voss
Celestial spirits sent by the Heavens to protect the dreams of innocents and children. They dwell in the Ethereal, usually hidden from those they protect.

The celestial ki-rins protect the innocent and fight for the cause of good.

The neutral zone around the Kirinal Pit. It's divided into 8 allied squabbling city-states.

The protector of the blue goblin baby, Of the Hope the Way.

Competition Homepage
In response to the prompt I want to adopt a cute pet in your world. What is it and how do I look after one?

What a delightful and tender version of the baku! <3

Thank you for your beautiful art!

So, so cool! I especially love the inclusion of the quote and the mother's response "Stop being greedy, my love! Your baku eats bad dreams, not candy!"

Awww I love this version of the baku! <3 What a great companion for children.

Thanks! I was trying to lean into a benevolent spirit after usually focusing so hard on nasty beasties.

Thank you! Now when I think of the capital of Azerbaijan, it's far better to remember this magnificent creature than its namesake of a town xD

Lol, I think it's a case of convergent linguistics! I definitely stole this from Japanese folklore1

Oooh I really love these creatures, and the art is so sweet too! I would've loved one of those as a kid. I especially like the Spirited Away sections, its a really nice touch.

Thank you! I liked that bit too!

This is a very sweet article... I love the Spirited Away reference, and how some children are acutely aware of their special Baku. It's sad they have to say goodbye :(

That's just part of growing up in the Zone! I do love how the little details just pop up as I'm writing.