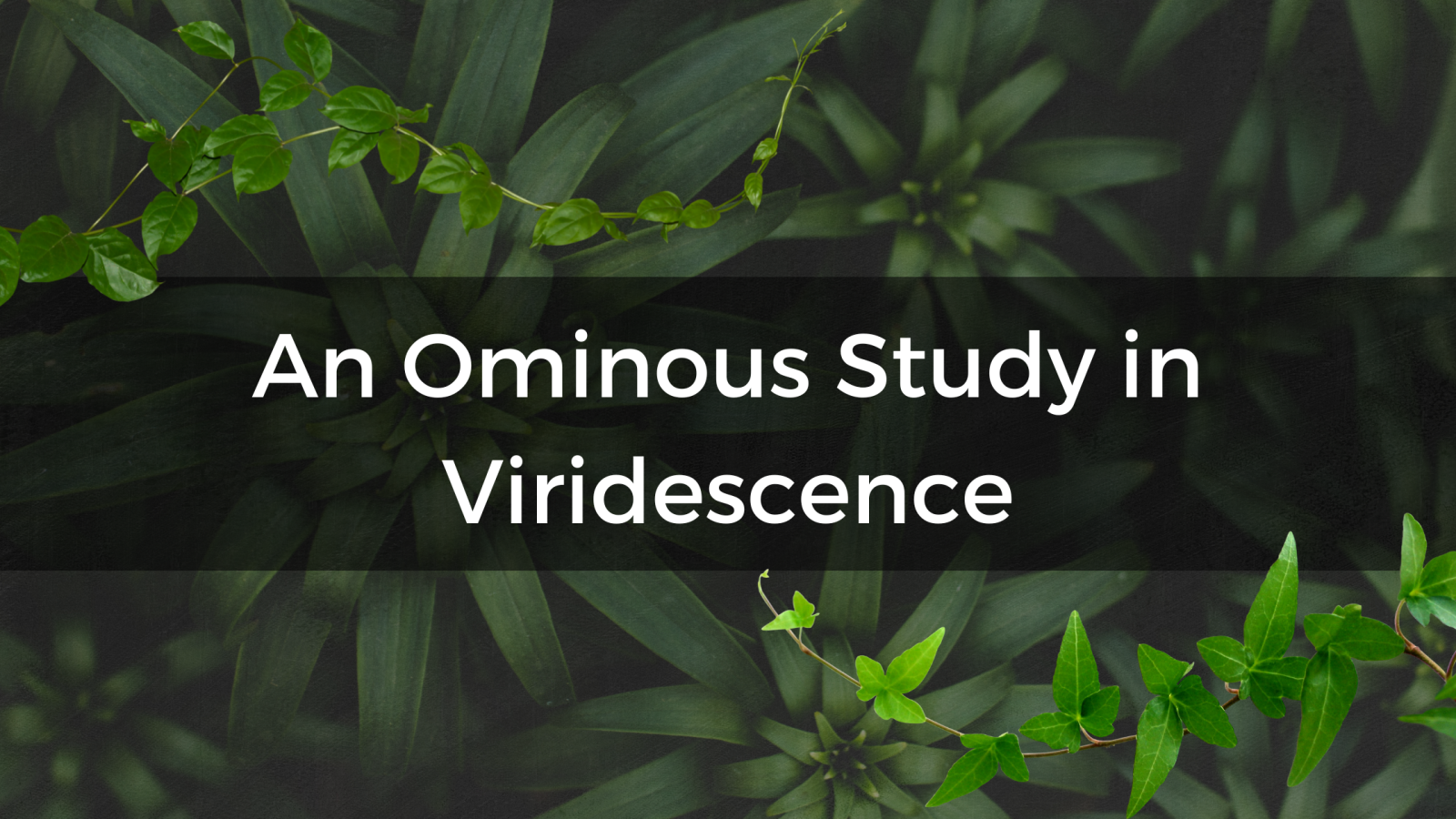 Today I am working on the layout, art style and music choices for the visual novel. After spending time creating an infographic to replace the corrupted whiteboard on WorldAnvil, I hope to make good progress on stylistic choices.


Classic layout / Background-character layout
This layout may work well for the mystery aspect of the visual novel. In this layout, the character we are talking to will appear in the centre of the screen, while we will not see our own character. The benefits of this could be to emphasise the other characters and suggest that we are 'interviewing' them. However, the disadvantages are that we cannot see the reactions of Andrew. I want to focus on what is going on in Andrew's head, and allow the player to enjoy the journey of Andrew's torment. So far I am thinking that there may be other more ideal layouts.
Two character layout
I am more confident with this layout as I use this for my visual novel project - Sea Hears. I don't think there will be many conversations involving more than two people, so this could work very well. I am wondering if a specialised visual novel layout could perhaps work better, taking inspiration from Wanderlust and Werewolf: The Apocalypse - Heart of the Forest.
There are also alternative ways to create a two character layout. One popular method nowadays is to have a character half body (from head to lower thigh) appear on the left and one on the right. Other older versions use 'face badges' in the dialogue box itself, which can highlight expressions. It also then makes it easier to see the rest of the background, which can be helpful for the mystery genre.
I need to carefully consider what is actually possible too. Now might be the time to experiment on Tyranobuilder.

Experimenting on user interface with Tyranobuilder

Before creating the Tyranobuilder file, I realised that the project needed a name. We decided on a number of different names for the project, and the naming process was a very fun exercise via Twitch. I believe it was Katie who suggested the name Atropa Spectre, which could be named after a plant that brings disease. They used the word 'Atropa' from the scientific name of the deadly nightshade, with spectre to make it more ghostly and cool.

Karpe suggested ideas such as 'A study...' and using words such as Verdant to show the theme. We decided not to use the word Verdant itself, as it was the name of something that was very important in our writing community, but someone suggested an alternative - Viridescence, which I took a very long time to work out how to pronounce!

After a great deal of thought and interaction from the chat on Twitch, the two names we took a poll on where:
The Ominous Case of the Atropa Spectre An Ominous Study in Viridescence

We decided we preferred the second, although I want to take a note on 'Atropa Spectre', as its such a wonderful and helpful name.

Black Cyber
This UI has a very cool feel to it. I love the darkness, I love the main menu. The only thing I am concerned about is that the text box looks a bit too modern and sharp, it is also rather small.

Shine
Looks more 'beautiful' than Black Cyber, can emphasise the plant feel. Very ornated. The menu is not as cool as the Black Cyber.

Europe (picture)
Not sure if it is as fitting as the other ones, a little bit too dainty. Not for me.

For now, I allowed the viewers on the Twitch stream to vote. Black Cyber won with two votes, while Shine won with one vote. There was a suggestion that the dialogue box in Shine might be more suitable, while the menu on Black Cyber looks very good.
Alternative UI
Taking inspiration from Wanderlust and Werewolf: The Apocalypse - Heart of the Forest, I experimented with creating an alternative UI, where the text box would be on the left. I managed to make this work (I think, further experimentation needed). This style would be dramatically different to the other styles, and it would mean it would need to be written in a more novelised format.

Looking at art
To decide whether to go for the alternative UI or to use Shine or Black Cyber, I tried to investigate how we might use character art if we did go for the classic layout or the two character layout. I demonstrated Mannequin, which is an anime doll maker that can be used for visual novels.

Using Artbreeder
Art breeder could work in a two character layout. I could create realistic character faces. With the shine layout, the character on the right kind of 'drowns' from all of the buttons, and in the black cyber layout, due to the name tag box, Andrew's head will be chopped off a bit. The tops of the heads are also chopped off a bit. We could fix that with frames to make it look more ornamented (and leafy) or we can just leave it alone. If there are frames, I can float up the characters away from the dialogue boxes, which will mean that either shine or black cyber UIs will work. 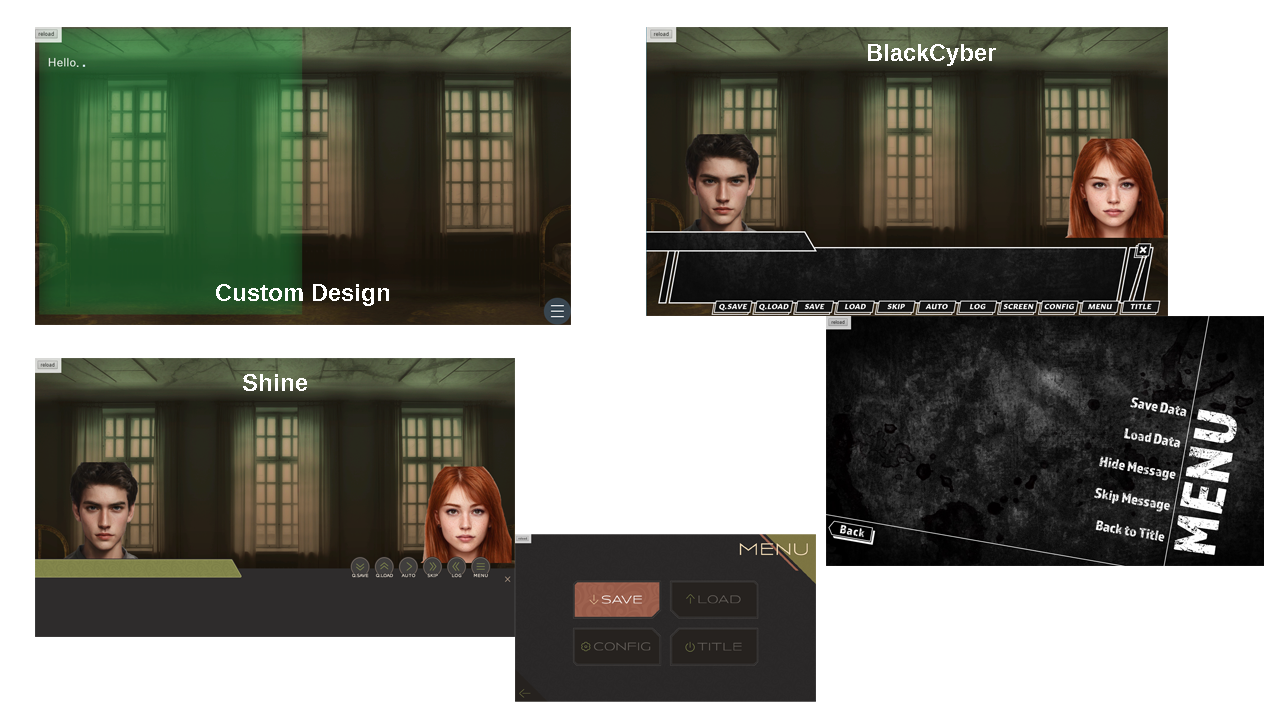 I am struggling to choose between these three layouts.
Custom will give me the opportunity to focus on writing a more novelised style, with first person perspective. It will be background heavy, using backgrounds to draw in atmosphere. I could use silhouettes instead of relying on character art. The text will be on the left side of the screen, and will have a translucent text box so you can easily see the background. It will save me time with character art, but I am wondering if it will take me longer to write the text.
The two character layouts - Shine and Black Cyber will make use of artbreeder, and will allow you to see the characters. I can change their expressions using artbreeder too, although I won't have very strong control over that. The strengths is that I can focus on Andrew's thoughts and make the visual novel more dialogue heavy. The weaknesses is that I willl need to consistently make character art, and I'm wondering if it will be as 'spooky' in this style. The tops of their heads will also be missing due to using artbreeder. But I do love how realistic their faces are too.
Although it will be time consuming, I think I will write a short scene with both styles, in order to be confident with my decision. I will write the opening scene and quickly code it in. 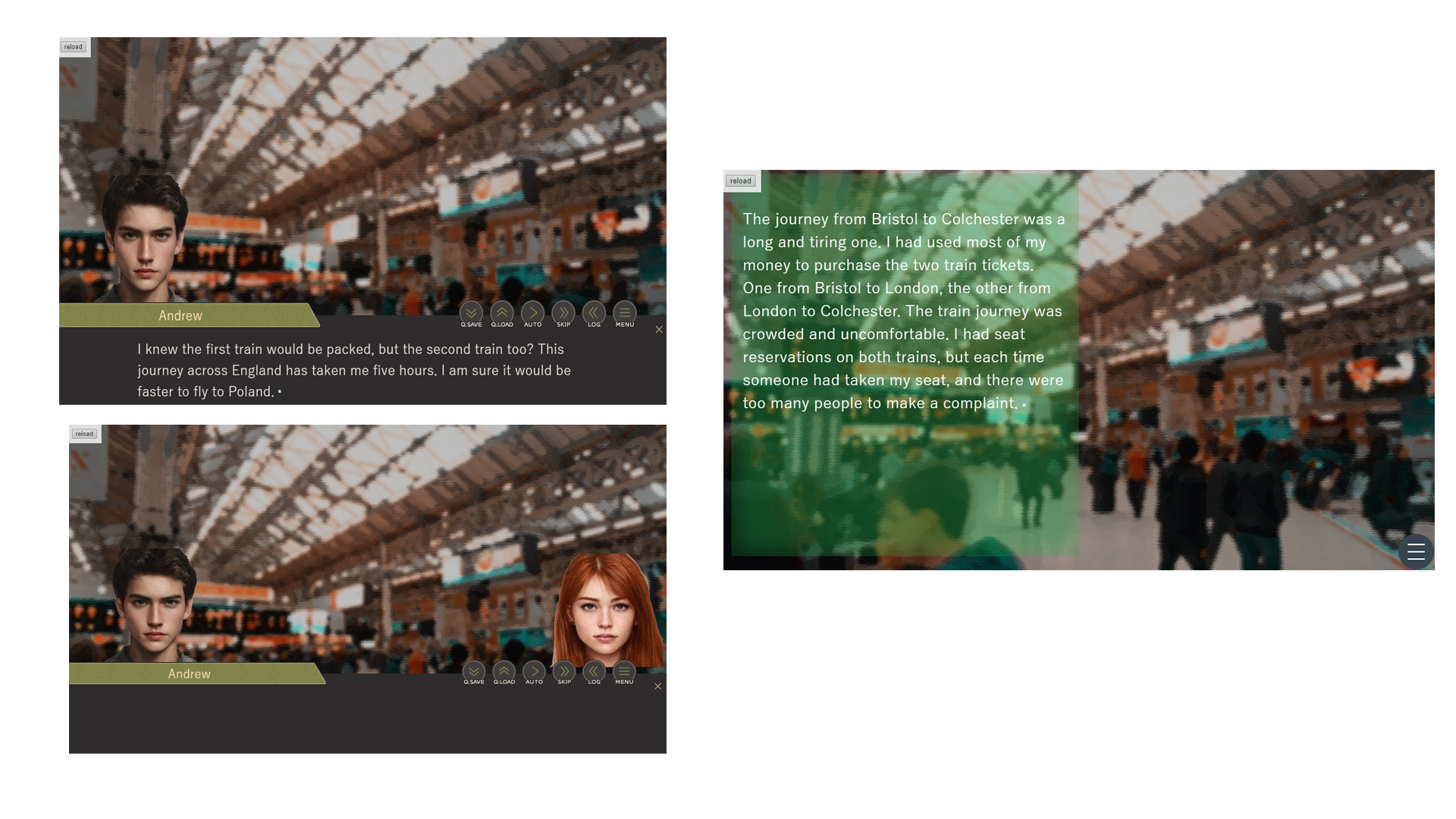 I created two different scripts that you can read on the 4thewords website. (You'll need to sign up to a free account if you don't already have one!)
Creating the two scripts was a very helpful experience, and it helped me understand that I enjoyed using both styles. While that made the decision still very difficult, it gave me confidence that I might enjoy using different styles in the future!
One of the amazing parts of streaming this challenge, is that I received very helpful feedback on Twitch. Some people commented that they preferred the dialogue heavy version, that could also describe Andrew's thoughts. They felt it may be more personal. Others suggested the custom user interface was better, because the heavy description could work well with the horror genre. Some people also liked the idea of using silhouettes for scenes in the custom UI.

This was the hardest decision so far, and I can honestly say I feel a sense of relief that I've finally chosen to go for the custom UI. While I still have a few concerns, namely, is my writing quality good enough for this style? And how to make sure the writing is readable. Both versions seem to work very well, but I do agree that the the custom UI can work nicely for the horror genre, and writing in this strange noir style that I've attempted to develop was very fun and enjoyable. I also like that I can save time and not have to worry too mcuh about getting distracted on artbreeder! Although I note for next time and any other VN makers - Artbreeders works very well for such a project!

Formalising the story and planning


My goal now is to understand the story from beginning to end, so I can begin to write it.
I like to use an excel spreadsheet to do this.
I first write short sentences of the basic premise in each cell.
Then, I look at ways to add more detail. I can add more information between cells.


One of the difficulties I have had is thinking about how Andrew will finally find his parents and solve the mystery.
I know the Mum's side of things, but I don't quite know how to lead Andrew to find his father - I generally don't know where the father is. But it is late, and I'm tired, so I think I will end the log here for today.
Development Log