In a time before time. 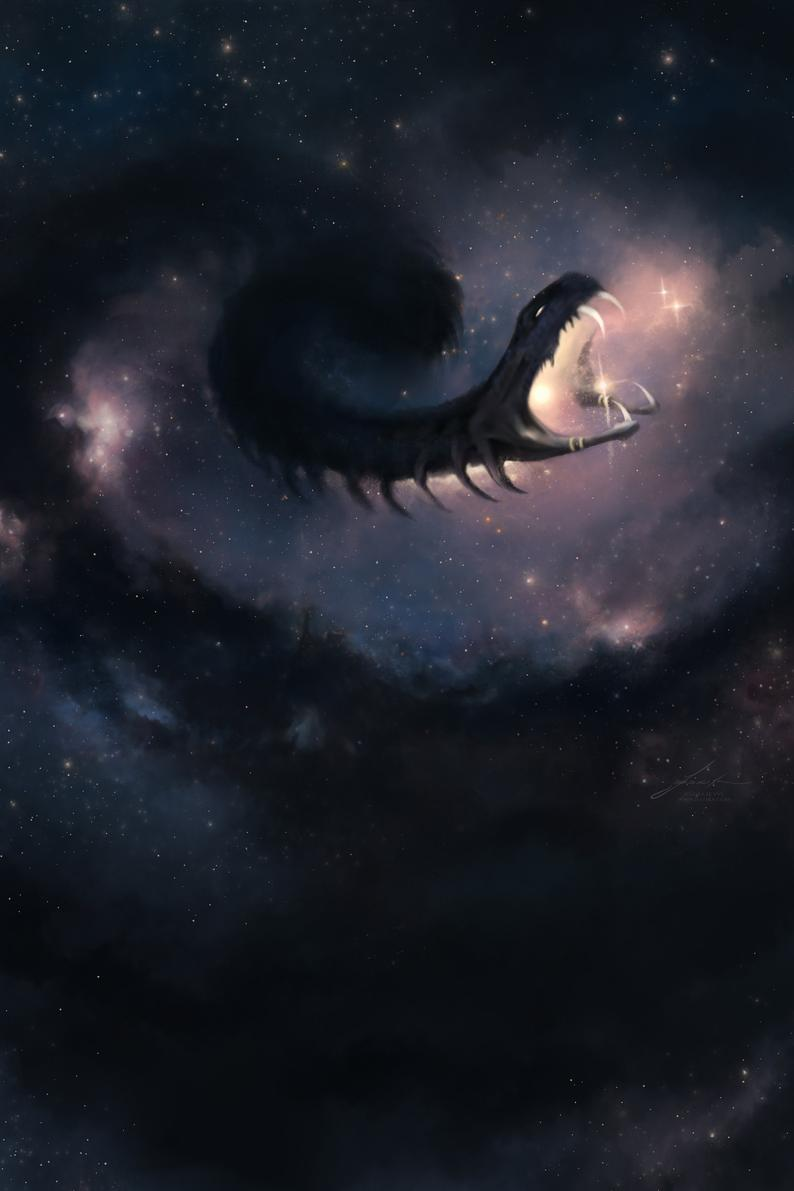 ome and make yourself comfortable. Sit with me and together we shall explore how this realm came to be.

In time long since past. In a place where light did not exist. There lived a serpent as ancient and old as the darkness it inhabited. No one knows where this serpent came from. Only its name; Tenebris – the never-ending shadow. The darkness incarnate that spends its life scheming and plotting against all that was, is and will be.
“There must be more” Whispered this serpent in a black and corrupted tongue.

The words rippled through the cosmos and smashed against a celestial door. Was this threshold here first or the serpent that found it? Some questions have no answer, for who is as old as this tale? Who can say with confidence they know? Only the mad wailing fools of the Faceless keep!

The serpent felt himself drawn to this gateway. It was teased by the possibility of what lay beyond and as Tenebris approached it heard the sound of footsteps from behind this mystical object.

A bang that echoed for a millennium. The frame shook from this mighty impact and the dust that spewed forth is said to have formed into the many planets and barren rocks that inhabit this realm. The door held firm and still Tenebris looked to consumed all. A second bang. More mighty still than the first split the wooden door; and between the gaps spilled great rivers of primordial energy that would build this place. Uncontrollable in their might and ferocity; they ravaged the serpent’s body. Cutting deep wounds along its flank. These streams of pure elemental force settled in the high and low places of the realm and became the Elemental Planes. The door held firm and still the darkness consumed all.

The lonely goddess hurled all of her mustered strength against the weakening door. A third bang. The wood didn’t so much as splinter but shatter into our realm. Large chunks of the gateway flew across the cosmos. Piercing the serpent on one side of the door and the goddess on the other. As these splinters left their bodies, they punctured the very veil of reality. One going straight through the hand of the woman and catching fire with a warm and magical glow. This became the Faywilds. Another gouging deep into the hide of the serpent where it was slowly corrupted into the Shadowfell.

The first thing to be borne into our realm from beyond the door was a pale-yellow light. Beautiful and made of pure energy. Carrying it was a goddess with golden skin. Some say they still see her today, but that cannot be so. How can you see such true beauty and not go mad? Stars themselves paused their twinkling and watched as she stepped into our realm. Solaine, the Unwavering light had found her home and as her breath escaped her all of time was born.
Children's Rhyme
Knock Knock Knock on the door for me
Here is the truth for all to see
Tenerbis the shadow, and Solaine did fight
To see out of the two who had more might!
She created the world, she created the trees.
All the while Tenebris made the universe freeze
She created the Eidolons, the great architects!
Tenerbis screamed with disrespect!   "You cannot do this I am stronger"
Solaine looked back "Not for much longer"
Childrens rhyme normally sang by older children to pass time.


Stay with me now. In this moment the whole realm came into existence and so too did Verra’Talu.

The Creation of Verra’Talu – The Time of the Eidolons

Tenerbis swelled with resentment toward this new source of wonder, this intruder. In his rage the great serpents’ instincts took over. It rallied its black heart and attacked Solaine. With great fangs the serpent gauged into her flesh and wrapped its spined tail around her throat. Solaine struggled with this unseen foe and with a spare hand thrust the light she carried into its eyes. Tenebris's jaws opened wider than the darkest cave and screamed. With a whip of its tail it tossed the light from the goddesses hand. As the light fell it landed on the planet of Verra’Talu. No more than a rock; Barren and cold. Tenerbis assault had been stopped but he would return when he regained his strength.
“This is where we shall make our stand” Solaine muttered. Looking at the great barren rock of our planet. 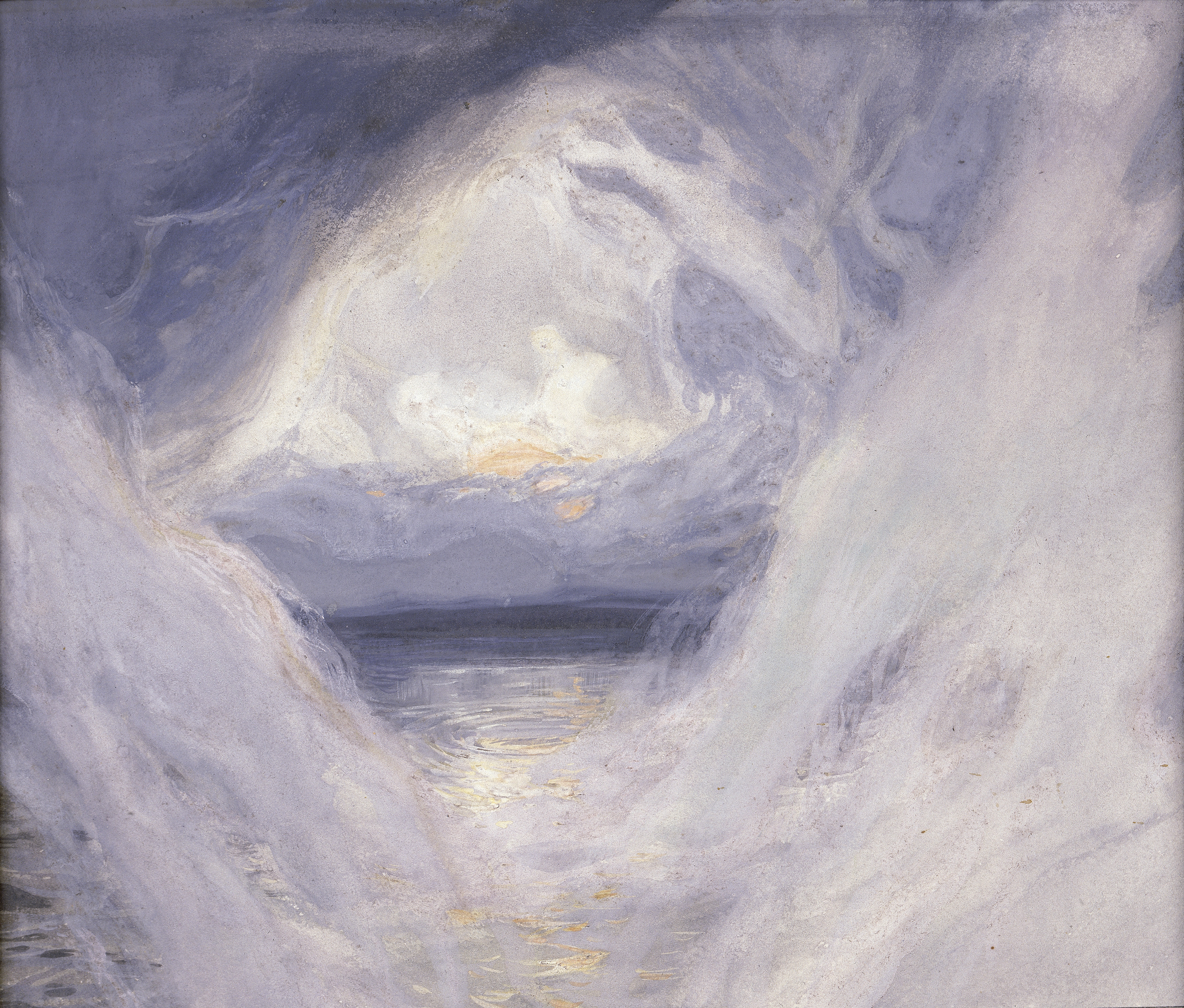 Placing her hands in the soil she moulded the first of the great servants. Ignis a horned beast birthed in flame and molten rock. Who rode on a chariot of fire to the two desolate and cold suns above Verra'Talu. He grappled the cold rock of the larger sun and with his great chariot pulled it into a spin. Faster and faster he rode and as he did the sun rose in the east and set in the west. Bringing heat and temperate into the world and basking Verra'Talu in a warming glow.
Next came a wide winged bird with a plumage of brilliant colour. Pulled form the very clouds that swirled around Verra'Talu. Ventus – The Windmaker. As Ventus flapped her feathers all across Verra’Talu the forceful storm blew. Carving out deep chasms and caves from the earth and land around her. In all the high places she resided looking at the two suns created by Ignis overhead. In all the low places she would converse with Solaine.

Next came the golem made of ice. Solaine plucked a single silver strand of hair and wrapped this around her thumb. She watched with wonder as her hair turned to cold pale ice. The hair formed into a golem of pure crystal shards She named her creation Glacia - The Queen of the Ice. Glacia felt the basking warmth of the sun and the embrace of the wind. She was overcome by the beauty of our goddesses creation and broke down into tears. Her tears filled up the ocean and lakes of our world.

"We are not yet done, there is more to be made" Informed Solaine, looking at her three creations.

The land was ready and supple. Solaine planted the first seed and watched as it drew strength from the water and heat of the world. A simple seed grew into a sapling that bloomed into a wood. Inside this wood an ancient tree let out its first seedling, Selima - The Forest Guardian. A creature looking more like a dryad than a man. He would be forever young; trapped inside the body of a child. Selima was tasked with educating the young woods and flowers of Verra'Talu, giving the plants reason to grow and take root in the earth. To nurture them and protect them.

When all was ready Solaine looked over the trees and water. The suns and wind. All were motionless. Solaine had given them the image of their creation but not the life force to live. She raised her hands to her golden hairband and as she flicked her hair in the wind she shouted to the cosmos

"Let it change with time"

Falling on the words of that phrase was Anima - The Manacles of life. Created in the booming voice of our goddess. Anima was more silver chains than greying flesh. His hands were bound to all things in this world. His face locked in one of toil and struggle. This struggle gave his purpose. He would pull all things through the passage of time. He called this his essence. It leaked into the trees and made them move with the wind. It sunk into the water and from the depths sprung life and fish. It even reached as high as the sun and saw the flames kindle and bloom in the heat. Summers would pass into winters. Winter would be cold and everywhere you looked Anima was there.   All was good, and Verra'Talu was rich and bountiful.
All that was left now was a guardian, something to watch over the Eidiolons and this planet. A leader in the absence of Solaine. She took her heart and cast it into a passing storm cloud. With a crash of thunder that shook the world Finis descended from the heavens. Finis - The Great Dragon. He was instructed simply to watch and keep holy this place, this Verra'Talu. Solaine was all loving so she could not see the betrayal that lay in the thoughts of Finis and the Eidiolons she created. Finis would lead this rebellion against their creator. Finis the Great Betrayer.
In the shadows, distant from Verra'Talu Tenebris observed and smiled with his dark thoughts. He set to work with the same power of creation Solaine possessed. A final Eidolon was formed in the darkness by the Never Ending Shadow itself. An Eidolon known as Negus Prime - The Negative Forces. This creation was told to destroy the intruder goddess. Negus Prime wasted no time attacking Verra'Talu. He was fierce and might, almost overcoming the Goddess. If it was not for the strength of Solaines sister we would not be hear telling this story.
What happened to this beast? It was imprisoned deep in the world of Verra'Talu. Deep in the core of our planet where it rotted the world from inside. Here this planet became its prison. Solaine created the Shimmer above our heads to keep Negus Prime in. Trapped with us, or are we trapped with him? We are the guardians of this world, kept here to watch over our prisoner to ensure he did not escape. We failed, but these are stories for another time. In another place. remember


It was through the Eidolons and our goddess Solaine Verra'Talu came to be.

Thank you so much for your kind words! I had a lot of fun writing this and glad it came across!