To all appearances a humble biology teacher, Jeb Kane played a surprisingly integral part of the founding of the Mordena mercenaries and to this day holds a healthy level of respect from its membership. Jeb currently serves as a member of The Inner Bastion, and Mordena representative to the Baden Sentinels.

The younger man held a bookish innocence, his wiry figure and pale skin a sharp contrast to Shane's dark, muscular frame. He shifted his weight under the necromancer's fierce orange gaze, cheeks flush, thumbing towards the door behind him. "Uh, loading dock?"
— Book 1: In Spite of the Inevitable

More comfortable with books and magic than hard labor, Jeb possesses a nerdy charm with a smile to match. His time spent working the soil for his beloved plants has left his fingers and feet rough and calloused, but the frequent sun has done little to darken his complexion.

Jeb is quite skilled in Agrokinesis and Telepathy, the former taught during his training with the Sparnell Armed Forces, the latter learned from his mother. He has a real affinity with plants, even moreso than standard for someone of his training level, although he doesn't often think outside his training regarding how to use these abilities.

Jeb most often wears comfortable earth toned clothing, although when asked as to why he often seems surprised, shrugging and admitting he probably just gravitates toward the colors he sees most often. He rarely wears socks if he can help it, preferring to easily be able to remove his shoes and feel the dirt beneath his feet. When reading he wears a simple set of wire rimmed glasses, which he typically keeps in his pocket.

Jeb's career began as a botanist for the Sparnell Armed Forces, where he quickly developed a favorable reputation – for a botanist – due to his fearlessness in requesting field missions, particularly planetary surveying. While these were largely in the hope of being assigned his sister Razick Kane's unit as escort, he nonetheless put his heart into each mission and the subsequent debriefing reports.   Upon conclusion of his Conscription Jeb departed Confederation space to settle on the planet of Baden, where he obtained work as a biology teacher at a prestigious private school. He has maintained this employment, even with his status as a full fledged member of the Mordena, using this role to keep a close eye on the Baden Sentinels and assist in filtering any Mordena membership applications from Sentinels in good standing.

Jeb was present in Shane Lawrence's boarding party at the Battle for Baden, although he doesn't often talk of his experiences. It was his suggestion to consider Janikk as a possible homeworld for the Mordena, as a direct result of input from Urla, and once again he served as a participant in the field mission to claim the mysterious and hostile planet for the mercenary organization.

As with most survivors of SAF Conscription, Jeb holds regrets from his past. In Jeb's case most of his traumas are rooted in emotional abuse due to the perceived inferiority of his role as a botanist.

Jeb glared in Shane's direction. "What kind of person are you?"   Shane shrugged. "I'm a problem solver. We had a problem." He raised his hand, the heart resting on his palm. "I solved it."   "But was that really necessary?" Jeb's face was pale.   "You're the pacifist," Shane pointed out. "Not me."
— Book 1: In Spite of the Inevitable

After seeing the horrors inflicted by the Confederation on the universe and even their own people, Jeb swore himself to a quiet, peaceful life caring about his loved ones. Courtesy of his friendship with Shane Lawrence, these days his definition of pacifism is more fluid, allowing for nuance in his efforts to defend those he wishes to protect.

More than anything, Jeb wishes to protect those he cares about. As he does not possess the offensive skills of his sister this often requires creative thinking on his part, but what he lacks in ability he makes up for in pure heart and determination.

"Haha. Yeah." Jeb sheepishly ran his fingers through his short brown hair. "I guess I'd better leave it to the professionals."
— Book 1: In Spite of the Inevitable

Jeb often tugs at or plays with his hair when he is nervous, overly excited, bored, or feeling any of the stronger emotions. As a result his hair is always a tousled mess.

While recognized as a full fledged member of the Mordena and even a respected member of The Inner Bastion, Jeb and his sister remain outside the command structure of the military arm of the fearsome mercenaries. He maintains close ties to the Baden Sentinels, often suggesting possible recruits from among their members.

Jeb holds a deep love for his sister, retired Battle Mage Razick Kane, with much of his energy spent in an effort to protect her from ever needing to use her combat skills again even as he recognizes his own inadequacy for the job. He also writes regularly to his father, another retired Battle Mage, despite the risk due to his father's continued residence within the Sparnell Confederation.   Having briefly dated the talented Urla, Jeb still includes her as part of his family even considering her purposeful efforts to maintain her distance. He acknowledges her requirement for space to forge her own path, an effort to make up for lost time stolen by the Confederation, and willingly sets aside his own disappointment to respect her needs.

An outgoing and enthusiastic biologist, Jeb finds himself equally at ease with people and plants. He is an animated speaker and a protective and supportive friend, quick to allow his emotions to dictate his words and actions when leaping to defense of a friend. Stubborn to a fault but endearingly loyal, Jeb often finds himself clinging to assumptions until finally convinced otherwise. 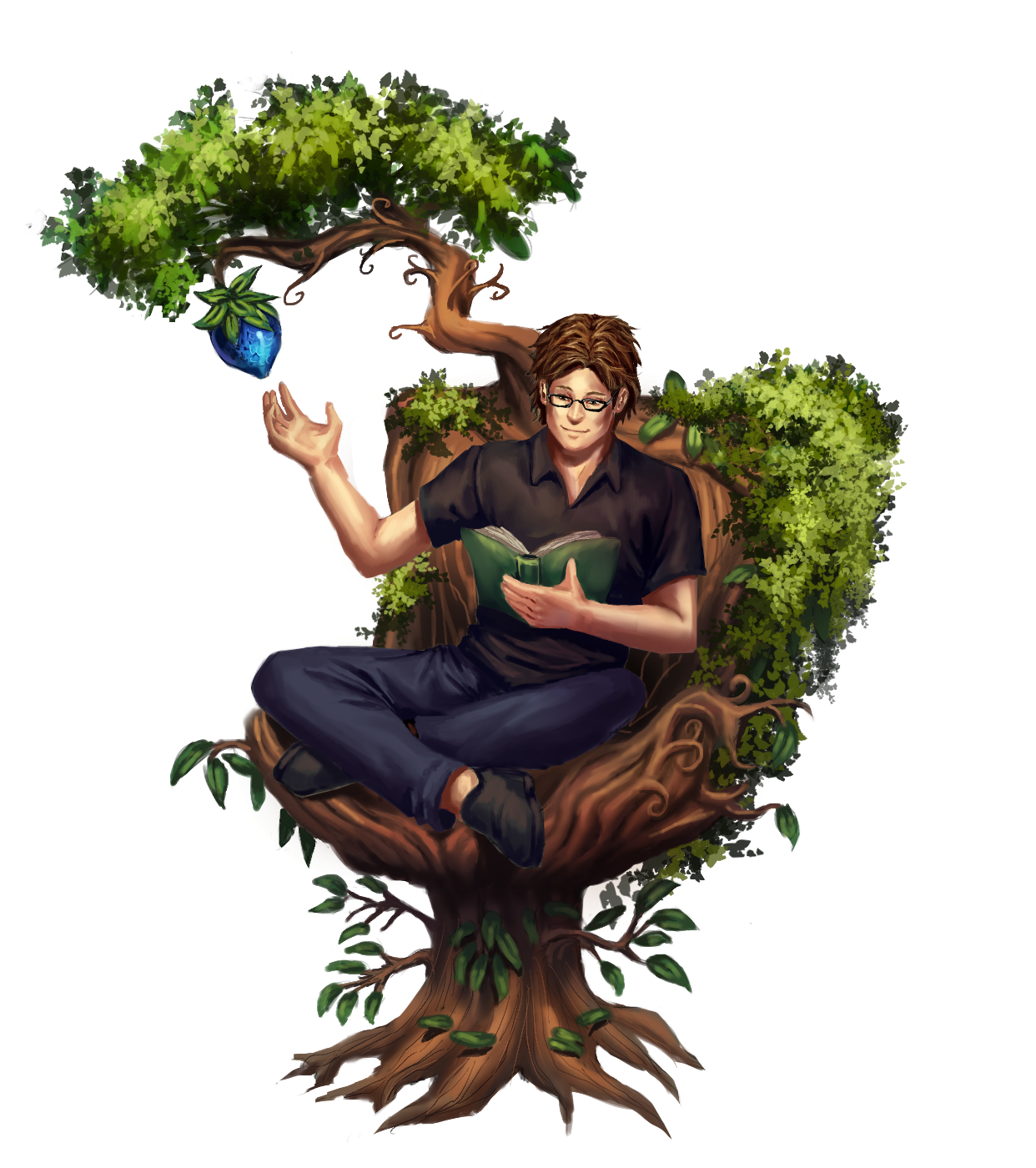 One of the founding members of the Mordena, Razick Kane is a highly trained Battle Mage with a troubled past.

Experts in the world of plants, botanists often specialize in the study of a specific set of behaviors, type of environment, or classification of plant.

Jeb would blush if he knew the size of his fan club.