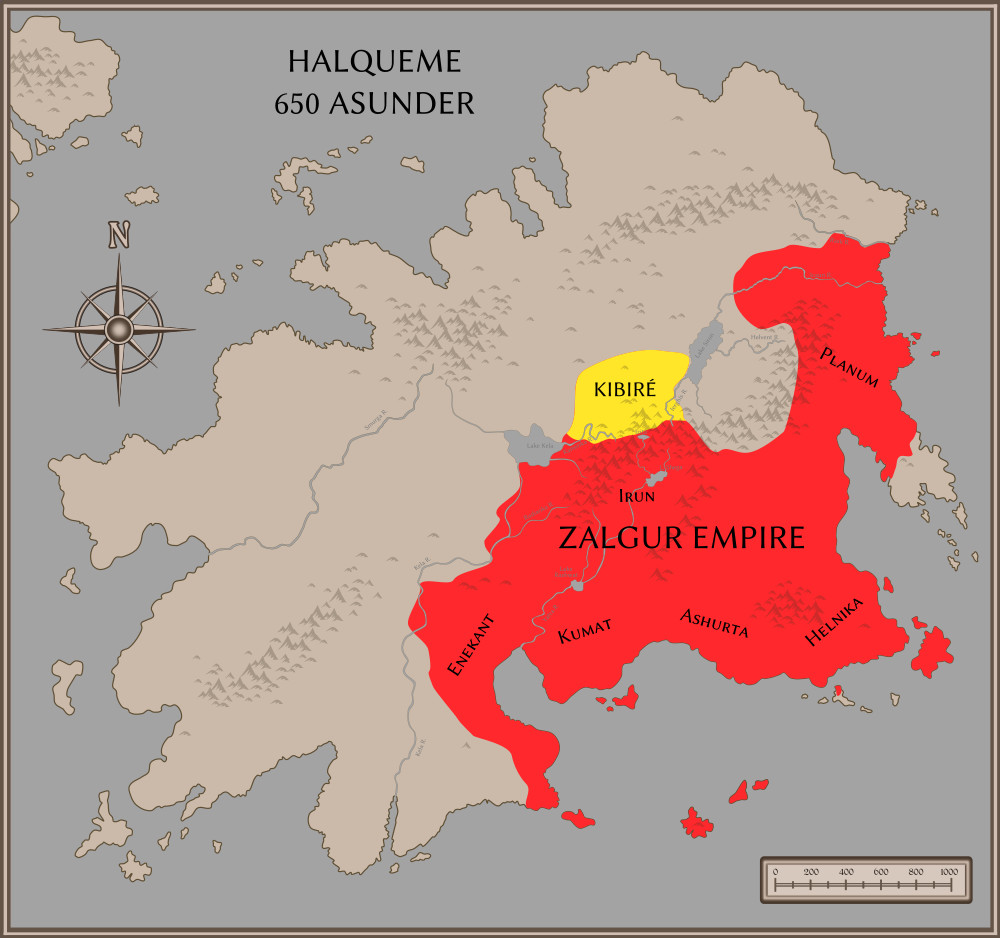 Kibran script was first developed in 7th century Asunder in Kibra, a former province of the Zalgur Empire.   Zalgur was the first major power that emerged after the general ruin of the Great Sundering. Culturally, Zalgurans were very literacy-conscious, intent on restoring, preserving, and developing whatever knowledge they could get their hands on. Whenever they annexed a new territory, they set up a local Literacy School dedicated to gathering and recording information on local art, science and magic. For this purpose they normally used Iruhał – an abjad script based on ancient Irunish cuneiform.   However, the literacy school in the northern province of Kibiré ran into problems. The province, administered by Zalgurans, was inhabited mostly by Galnic and Bereghin tribes. Their languages were from an entirely different language family than Zalguran — they were much more vowel-heavy, with much less predictable patterns, and besides had sounds Zalguran didn't. Recording them in a Iruhał, using purely Zalguran consonants, quickly proved extremely confusing.   Zalguran scholars tried to get around it by adding diacritics, which transformed Iruhał into a sort of abugida, and sometimes by substituting local runes for missing sounds, but the end result was still very messy.   In 672 Asunder, the Zalgur Empire collapsed, and the Province of Kibiré became the sovereign Kingdom of Kibra.The scholars in what now was the Royal School of Kibra were by then mostly locals, and in 683 they decided to give up on Iruhał altogether and instead design their own script. The idea is generally credited to a Galnic scholar called Iantumara of Rituma, but the implementation was a joint effort by her many students. The script drew some inspiration from Iruhał, but for the most part was based on Galnic runes.   The Kingdom of Kibra did not last long, and by the 750s had split into five independent princedoms. The Kibran script, however, remained, and was adapted for use by almost all the people living north of the Red Ridge.

Bereghin alphabet was adapted from Kibran around 10th century Asunder. It is still used to write modern Bereghin. Below is a romanization, followed by printed Bereghin, followed by cursive.

Like Bereghin, Gwelaran was adapted from Old Kibran for local use. It's currently used for writing Halcian language. Below is a romanization, followed by printed Halcian, followed by cursive.