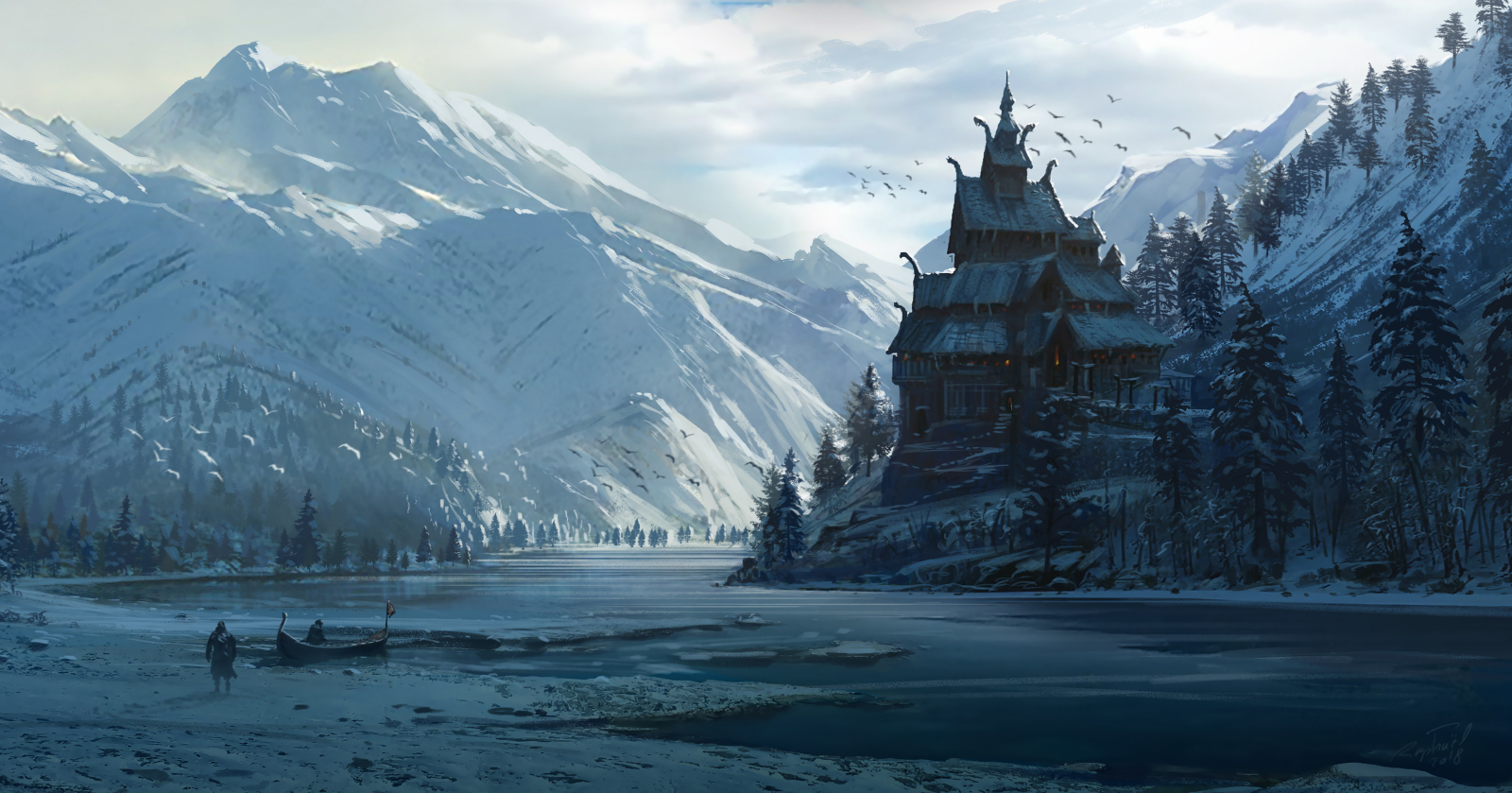 Rúnar was born in a small village apart of the Boar Clan to sheep farmers and mead makers. A comfortable life far from the front lines of the war and the coastal regions prone to raids. Rúnar and his older sister Katrin spent most of their days helping on the farm or playing in the warm fields of southern Vagrland. Like most children their age, they learned to fight with an ax and shield and often found joy in playing in a small abandoned outpost despite their parent's protestations. One afternoon, Rúnar noticed a crack in a wooden wall, which he decided to pry free. When Katrin caught up to him she cursed him and forbade him from entering but he ran ahead anyway. It opened into a massive cavern that appeared a storeroom, past a narrow hall lie a second smaller room that held some old weapons, axes, spears, even a sword which the kids had never seen in person. Again Katrin caught up to him and again she cursed him, as she stepped inside the smaller room she began to explore the edges of the room as Rúnar played with the sword in the center. It wasn't long before she came upon the first of half a dozen corpses, lying all about the walls of the room. Her voice cracked as she encouraged her brother out, carelessly he swung the sword knocking over a rack of armor. This seemed more than enough to wake the beasts that lie at Katrin's feet. She shouted for her brother to run but he froze in fear. She sprinted toward him pushing him toward the hallway, but the creatures were up and after them quicker than seemed possible for something so rotten. Each of their movements was seemingly disjointed from the others but still impossibly quick. Katrin led them into the hall before she felt them behind her, she knew she had to save her brother. She pushed him forward telling him to run as she turned to face them. Katrin managed to smash some supports just in front of the door they came in after her brother made it through. Rúnar heard the rubble collapse behind him as his sister cried out in pain. When the tunnel collapsed so did he, Rúnar fell to his knees and began to weep, minutes, hours, perhaps even days passed before Rúnar was woken by a gentle voice of a haunting figure. The figure claimed to be the protector of the departed, guide of wayward souls, and she saw him as one of them. However, when she laid her hand upon his cheek she realized his body had not yet given in to death, it kept him bound to Midgard even though she saw his soul as his. That simple touch transformed Rúnar into something else, something different, something in between. He became some kind of wraith.   After the incident, Rúnar never mustered the strength to return home and face his parents. He felt the weight of her death on his shoulders and feared their judgment. He fled north, toward the Lynx Clan wandering for days unable to process or confront what had happened. He ventured into a small village looking for food, ill-prepared for his journey, he was forced to try and steal from a market stall. Unfortunately, he lacked the skills to do so and was caught immediately. They bound the boy and took him for judgment by the Lagmann. On some kind of instinct when confronted with his actions, Rúnar's abilities kicked in and he phased into a phantasmal wraith form for just the briefest of moments. Terrified screams rang out and a nearby "Domari(Judge)" of Temple of Tyr came running, he immediately grabbed the boy with his bound hand and announced he would be binding the dark spirit inside Rúnar. This mark is used only for the worst offenders in Vagrland, those believed to be dark mages or heretics. This marked him as Vörumerki Branded. The Domari believed that the mark would hold the spirit at bay and through it help correct the boys actions.   From that day forth, however, he told himself only strength would bring peace, that he would have to overcome his fears, face them even. So he began training, in anything and everything he could.
Conditions
Ethnicity
Plainsfolk
Date of Birth
Winter
Year of Birth
827 26 Years old
Children
Presented Sex
Male
Aligned Organization
Boar Clan
Other Affiliations