The traders don't really have a written language in the same sense as we have, thus they have no alphabet.

The language spoken by the nomad traders of Tosormi has 13 consonant sounds and 3 vowel sounds (see chart at the end of the article), as well as one diphthong: ai, pronounced like the i in ice.   Some of the sounds are obviously more common than others. For example the glottal stop only really appears when in between two vowels. The ʙ is also only used in the beginning of words.   As for syllables they consist of a simple (C)V(C) structure, where both the coda and onset is optional. There is also the structure with the glottal stop where V'V is also a valid syllable.   All consonants are valid in the onset and all vowels are valid as nucleus, however these sounds do not appear in the coda: ʙ, ʒ, x, h or z.

There is no fixed stress system in the nomads language, instead words can have different meanings depending on where you put the stress. 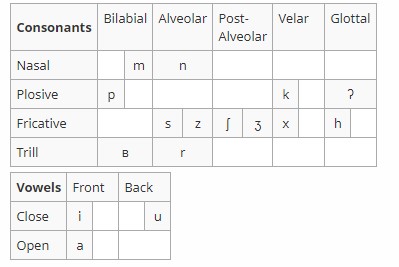