The Evergreen once spanned almost the entire continent of Ellara from north to south. At its widest, it is about 50 miles east to west. Near the very center of the forest, is a tree called Cal Cas that the word massive fails to describe. Standing thousands of feet high, the Elves who live in the forest have quite literally built a city in and around the great tree.
It is a landmark so large that those in the floating city of Uman' Yiro far to the east can see it clearly.

The forest also hides many networks of caves, tombs and historical locations lost to the outside world over time.

Recently, on the eastern border with White Wolf Valley a clan of orcs called The Moz'zog have made their camp and have been expanding at a rapid rate causing hostilities with the Elves to escalate.

Several years ago during The Battle of White Wolf Valley the legendary dragon Straad razed almost one third of the forests southern tip. It is slowly growing back but will take centuries to fully cover what is now known as "The Scar".

As with any forested area of this size the variety of beasts living there is vast. Aside from the Elves, who have called it home for millennia, there are humans who have small logging camps and those trying to escape polite society.
Drakes, dire wolves and bear and other large animals roam freely and are the apex predators in the area. There are also rumors of fearsome beasts that are the things of legend that many an adventurer have claimed to see but which have not been proven to exist.

As a massive forest, naturally wood is the main resource which is also a source of much conflict.

In the last decade the city of Overwatch spent many years clear cutting the forest to support their war machine. The Elves fought back as they could but the mechanized army of Warforged devices made short work of the trees.

After Overwatch fell, that operation ceased but shortly after the Orcs of the Moz'zog clan arrived and began their own cutting operation. Orcs believe in expanding their domain where ever that happens to be is a prime directive. This also riled the Elves and clashes occurred along the border of the forest until recently when a group from Winterhaven worked as a mediator to begin an agreement between the two groups.
Currently, the Evergreen is peaceful but that can end at any moment. 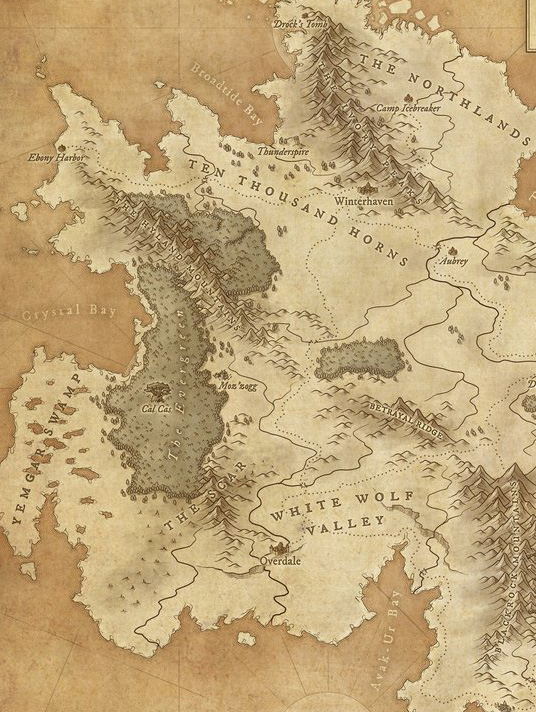